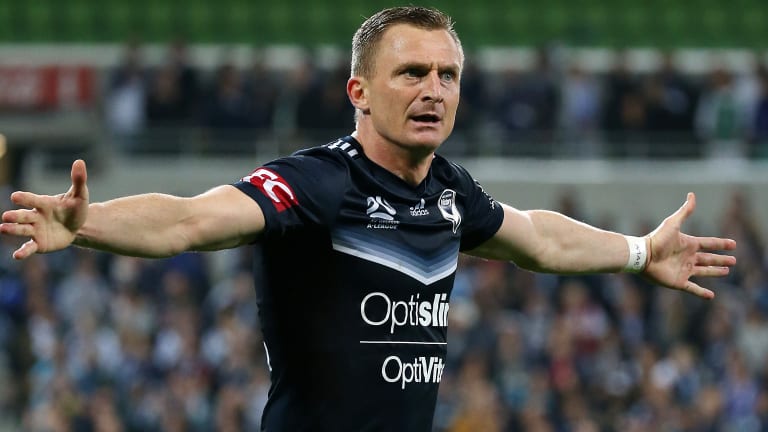 Besart Berisha is happy to admit that his spectacular bicycle-kick winner in the dying moments of the elimination final against Adelaide on Sunday night is the best goal he has ever scored.

And, he says with a smile, he hadn't been watching Real Madrid's Cristiano Ronaldo, who scored an amazing airborne volley in the Champions League earlier this month, for inspiration. Well, not really.

The Kosovan international is the A-League's ultimate big game player, and he proved it again in this sudden death clash with the Reds.

Melbourne Victory's No.8 had, in truth, had a pretty ordinary evening until his dramatic 88th minute intervention.

He had got little change out of an Adelaide defence well set up to counter the threat of himself, Leroy George and Kosta Barbarouses, and with scores locked at 1-1 it seemed for all the world as though this final was heading to extra time and the nightmare of penalties – something Berisha was definitely keen to avoid following last season's shootout grand final loss to Sydney.

It even looked as though coach Kevin Muscat was preparing to take him off with extra time looming to try to find a new forward mix that would shake up the Reds' rearguard.

Thankfully for Victory, he left Berisha on, with the best possible result.

''It was a really important goal for us, and to score a goal like that you are double happy. It's a goal you don't score much in your career, probably never.''

Was it the best he had ever scored?

''This is my first goal like that. Yes, I think so, I personally think so. It's in the finals and last time we lost in Sydney in the finals on penalties, you don't want to play penalties, that's why I am happy to score that goal.

''I just felt there was nothing else possible but to do that. To take a touch would have meant everyone comes and takes the ball away,'' he said as he was describing what went through his head as he looked to connect with Barbarouses' cross.

"I did something like that in training after the Champions League game.

''The players who didn't play had to train and I did this, I scored in training. It's very interesting because I heard Ronaldo did the same, so I have to do a little bit more, because whatever you do in training happens in the game.

''Adelaide make it tough. they played a really difficult game for us. We couldn't even play combination up front because they just play long balls away from the box. They didn't give us any chance to sniff something in the box.

Berisha has had his critics this season, but the veteran forward is upbeat about the future.

''My confidence is really high. I take nothing for granted, you go through tough times, but I have had much worse moments. This is something I learned from experience. For me every game is a new chance, a new opportunity, this is how I see it. This is the game, up and downs will always be there.

''This is why I am so motivated, I love finals, you know that. I live for this, it's something special I don't take for granted. you don't know when you are going to play again.

"Against Sydney we have nothing to lose, we know exactly that we have always a chance to win every time we play them. The most important thing is to stay disciplined and to believe.''