Albury trainer Garry Worsnop bought broodmare Blameless for $5000 after he retired from the coalmines and she could prove the best superannuation he has, as Nothin’ Like Harry’s career continues to flourish.

The promising four-year-old has missed a place only once in six start, a mistake as Worsnop calls it, and has three wins on the board as he comes to Rosehill for Saturday’s Highway Handicap. 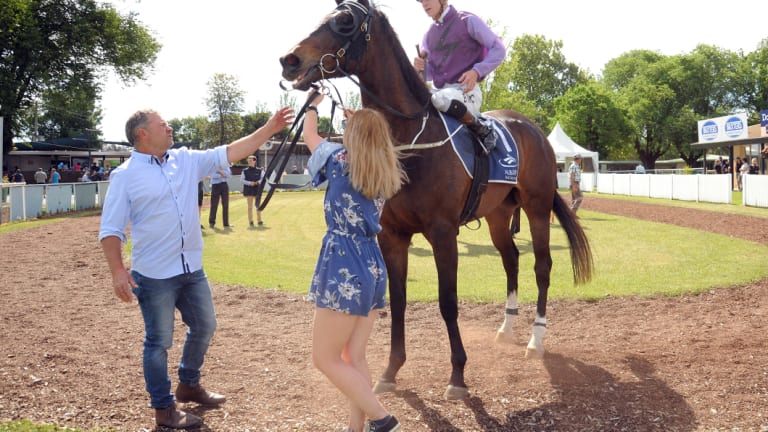 “I used to train in the 80s and gave it away to get a real job in the mines,” Worsnop said. “When I finished there I thought, 'why not take out my licence again?'

“I went to the sales and bought this mare and sent her up to a mate’s property to be served by Nothin’ Leica Dane and this is the result. He is the best horse I have ever had.”

Nothin’ Like Harry showed his talent from the start and wins over a mile at Wagga and 2000 metres at Albury had Worsnop “throwing a nom in” for the Albury Cup.

“I thought they would get 40 [in the cup] and he wouldn't get anywhere near a start, but they only got 18 and I decided to run him. That was mistake – he wasn’t ready for it,” Worsnop said. “We got him back to his own age in the Wagga Guineas and he run a really good race against some good horses to run third.

“He was three and four wide all the way and got a little lost but he kept coming and it was a good run.

"I put him away then because he is so big, he’s 17.3 [hands], he needed to mature. I think he could be an Albury and Wagga cup horse next year.”

Worsnop has already turned down several offers for his horse and his mates keep telling him to move him to a big trainer.

Big Harry is going nowhere, as he could be the horse of dreams.

“I just want a good horse and he is like family to me. Why would I sell him? I bred him and  I’m not going to get another like him,” Worsnop said. ''He’s pretty good, I tell you, and we are going to find out how good in the next couple of years.

“I think he might get back to Sydney for a good race one day.”

Nothin’ Like Harry comes to Sydney after winning under a 62kg steadier first-up on home ground at Albury over 1400m. Worsnop said the Highway money was too good to turn down and has him wound up and ready to go.

He has regular rider Blaike McDougall, who has been in the saddle for all three wins, claiming two kilograms from his 58kg handicap on Saturday.

“Blaike is very confident he can come up there and win,” Worsnop said. “I would be more confident if it was a bit further because he is going to be a 1600m-2000m horse.

“I know he won over 1400m first-up but he was fresh and needed the run. As long as they get along a bit he is very fit and will really hit the line hard.

“It is a long way to come but it is worth it if he can win. I might look at a couple of races in Melbourne with him after Saturday because it is only three hours [drive] and they have quite a few staying races.

“He will have a couple of runs then a short break and get ready for the Albury Cup and Wagga Cup.”