Not for the first time, Christian Petracca has run into canine-related trouble.

The Melbourne young gun will miss Sunday's clash with Essendon with an infected finger following a dog bite.

Petracca played through the injury on Tuesday night against Richmond but has been ruled out of the Bombers match, after needing surgery.

He will be in hospital over the weekend, although promisingly the Demons expect him to miss only one game. 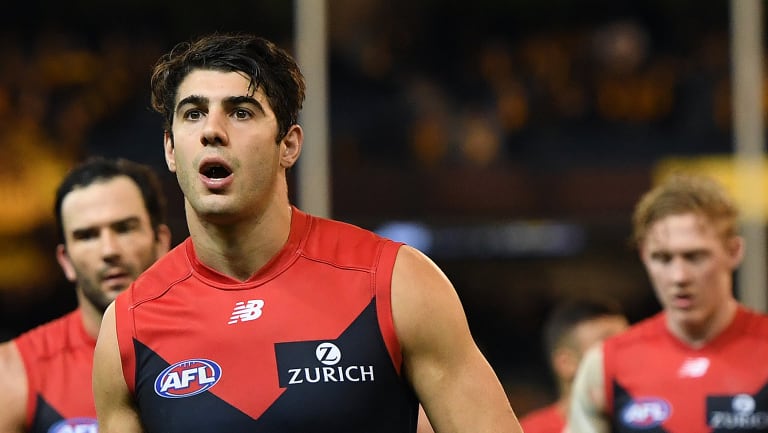 Petracca's 2016 campaign had been delayed following an injury sustained while playing basketball with his dog. It's understood the recent bite came from a different dog.

“It was a reasonable size wound on his finger, but it was bandaged and taped for the game," Dees high performance chief Dave Misson told the club's digital channels.

“But 24 hours post the game, it looked like it was becoming infected, so he went to see a doctor, and the doctor felt that he needed the wound to be cleaned out, which they did today (Thursday).

“But by today, that infection had gone into his bone and gone down to his finger joint – at the top of the finger.”

The Demons have also lost Dean Kent to a hamstring injury while Billy Stretch has been dropped. However in better news for Melbourne, Tom McDonald is available to play his first game of the season and has been named in their 26-man squad, while Jordan Lewis has also been included after missing the loss to Richmond with a fracture in his hand.

Badly beaten on Anzac Day, the Dons have lost Josh Green and Josh Begley to injury, dropped Michael Hartley, and opted to rest experienced pair Tom Bellchambers and David Myers. A host of players including injury-plagued youngster Jayden Laverde and big man Matthew Leuenberger have been named in Essendon’s squad.

Hamstrung Collingwood trio Darcy Moore, Taylor Adams and Jamie Elliott have all missed selection for the Pies’ clash with Richmond on Sunday. Daniel Wells also remains on the outer, with the Magpies adding five players, including untried pair Flynn Appleby and Brayden Sier to their extended bench. Travis Varcoe will be rested off the short break.

Geelong have opted to take a cautious approach in managing injury-prone forward Daniel Menzel who will miss Saturday’s game against Sydney with groin soreness.

"He was going really well this time last year and the reflection from Dan in particular, as well as our people, is that we waited a little too long before we intervened," coach Chris Scott said on Thursday.

The Cats have also dropped Jackson Thurlow but have regained Tom Hawkins and Cory Gregson. As forecast, the Swans have lost Dan Hannebery and Lance Franklin to injury, as well as Dean Towers. Ben Ronke has been named to debut, with Robbie Fox and Daniel Robinson also included.

Hawthorn have also named a debutant, with James Worpel picked to take on St Kilda on Saturday night in Launceston. Shaun Burgoyne and Will Langford have also been included.

The Hawks have dropped Conor Glass and lost Liam Shiels to injury and James Sicily to suspension.

The Brisbane Lions have decided to rest veteran Luke Hodge for Saturday’s game against Greater Western Sydney. The Giants have lost Toby Greene to a foot injury while Josh Kelly remains sidelined.