Blake Austin took a gamble when he backed himself to earn a new contract and Canberra Raiders captain Jarrod Croker hopes the Green Machine will reap the rewards on the park.

Austin will cap off a "miraculous turnaround" when he lines up to face the ladder leading St. George Illawarra Dragons at Glen Willow Stadium in Mudgee on Sunday. 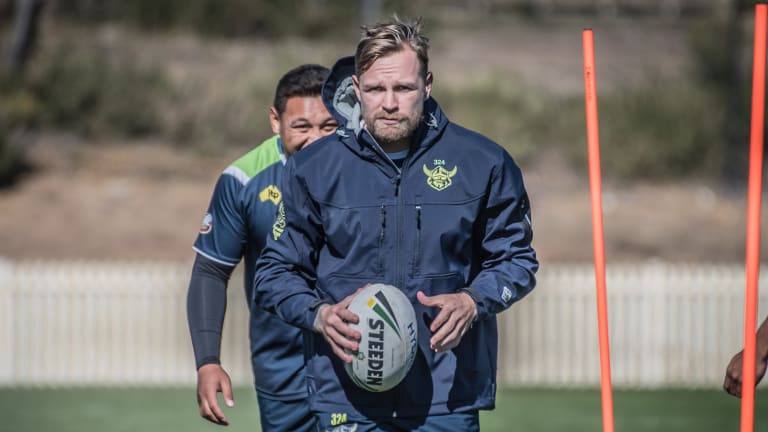 Blake Austin has backed himself to earn a new deal.

The off-contract five-eighth is playing for his future and he has declared he wants to know the club backs him to steer the Green Machine before signing on the dotted line.

He says his reasoning for knocking back contract offers wasn’t a matter of adding some extra numbers onto his contract, but strengthening a commitment that goes both ways.

The Raiders reportedly have no offer on the table for Austin as they edge closer to re-signing halfback Aidan Sezer on a multi-year deal, with Sam Williams also contracted until the end of 2019.

The 27-year-old has bounced back from an ankle scare to retain his place in the starting side and he will have a pivotal role to play in a Raiders outfit that lost its way without him.

Opposition defenders know how dangerous Austin can be with ball in hand, but Croker says it's his defence that is making people stand up and take notice – and his resurgence has had a telling effect on the playing group.

"A bit of a miraculous turnaround for him [over the past week] but he has done all the right things in physio," Croker said.

"He has been really good. Defensively he has really aimed up and worked off his line. He is working really well with that right edge and when his defence his good, we all know how good an attacking footballer he is.

"It’s good to see Austo hit a bit of form and thankfully there’s no games [he is] missing out with injury.

"There’s key battles all over the field I think. They're a quality side, they’ve got a really good forward pack and some good halves and outside backs as well. It’s a big test for us but it’s great to have [Austin and Sezer] playing together again.

"To have Austo back on deck… I thought we lost a little bit, obviously you will, you lose a half throughout the game and you’re going to lose a bit of shape and a bit of cohesion there, and we lost that last week. It’s good that he’s alright to go."

Back-up half Williams and hooker Craig Garvey dropped off the extended bench to play for Mounties in the NSW Cup on Saturday, while Hame Sele and Mitch Allgood were culled from the Dragons squad.

It seemed both Williams and Garvey may have been in the frame for a first grade call-up when Austin limped off the field with an ankle injury last week.

But scan results cleared the 27-year-old of a serious ankle injury in a massive boost for a Canberra outfit trying to force its way into the finals picture against a Dragons outfit experiencing unprecedented stability.

"It’s not a disadvantage for us at all but it’s definitely an advantage for those guys. Having the same 17 for two months, your combinations are working well and your game flow and interchange is just the same," Croker said.

"We haven’t been too bad injury-wise, touch wood, we’ve had a couple there but we’ve been pretty consistent as well. It would be nice to have the same 17 for two months that’s for sure."