It was a movie we had all seen before, but with a plot twist that made the ending even worse.

Canberra Raiders five-eighth Blake Austin could be facing a long stint on the sidelines after he limped off the field during a 24-16 loss to the Cronulla Sharks in front of 11047 at Canberra Stadium on Sunday. 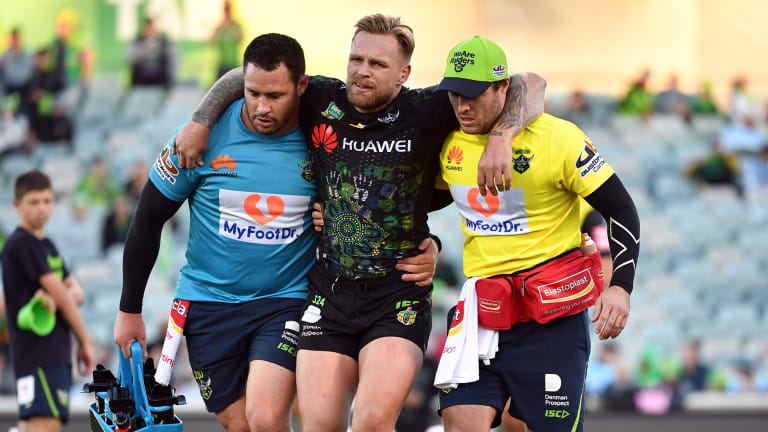 The club initially feared a possible high ankle sprain or fracture for Austin in a major blow to a resurgent Canberra outfit.

It comes a week after the Raiders lost hulking prop Junior Paulo for up to 10 weeks with a mid-foot sprain.

A win would have put the Raiders into the top eight, but instead it was the most inexperienced Sharks outfit in almost four years that walked away with the prized position.

The visitors were dealt an early blow when Paul Gallen's return from a knee injury was delayed for another week, and his absence meant Andrew Fifita was leading the most inexperienced Sharks outfit since round 26, 2014.

The Raiders pride themselves on winning at home, but they haven't been able to do it very often against the Sharks in recent memory.

The Sharks have won six straight games in Canberra – three were thrashings and three by the barest of margins. They haven't lost a game in the capital since the 2012 finals series.

The Raiders had been panned in the past for being "mentally weak" because of their nightmare record in close games.

It seemed some had changed their minds after the Green Machine found ways to win ugly, but a complacent second half saw the Sharks continue Canberra's horror run.

But it only took a few fleeting moments for Holmes to make amends when he defused a bomb and sliced through the staggered Raiders defence to score an 80-metre try.

The Raiders battled to find any prime real estate and they made the Sharks pay when they finally got a shot in the red zone when Austin cut through to score under the sticks.

It came at a price for the Raiders with Austin assisted from the field after being bent back awkwardly in a massive blow for the firing playmaker.

Raiders coach Ricky Stuart has options at his disposal with halfback Sam Williams making his return from a knee injury for Mounties in the NSW Cup the day before Canberra faced the Sharks.

Canberra took an eight-point lead into the break and the returned with the wind at their backs. But they also returned looking complacent.

A swathe of penalties saw Cronulla march back into the contest, and while their first chance was denied, the Sharks made the most of their second through debutant Jack Williams.

Cooma product Williams was Canberra's under 20s player of the year in 2016 and made the Raiders contemplate what might have been when he scored his first try in Cronulla colours.

The Sharks played from behind for 66 minutes but the Raiders couldn't put them away during a placid second half, and Cronulla winger Sosaia Feki made them regret not putting the foot on the throat when he dived over.

Then the Green Machine's attack fell in a heap. James Segeyaro claimed an intercept during Canberra's final charge, and he hit Holmes who ran away and took two competition points with him.