The Canberra Raiders have moved on from Blake Austin, with recruitment boss Peter Mulholland revealing the 2015 NRL five-eighth of the year looks likely to leave at the end of the season.

Austin rejected an offer last year and the Raiders shifted their focus to re-signing other players, reducing the room remaining in the salary cap.

Mulholland said while something could happen in the coming months to free up more space, at this stage it looked unlikely they'd be able to fit Austin in. 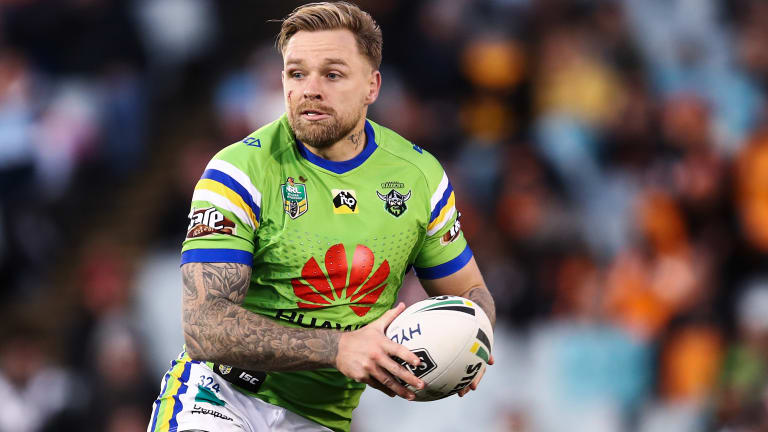 Blake Austin looks unlikely to be with the Raiders next season.

Austin had an up-and-down game in the Raiders' 48-12 flogging of Wests Tigers, getting sin-binned but also scoring a try.

The Raiders will need him at his best this week for their crucial clash against the Brisbane Broncos at Suncorp Stadium on Saturday, where they need to win to keep their NRL finals hopes alive.

They travel to the Gold Coast on Tuesday for a pre-game camp as they look to turn around a Broncos hoodoo – they've only one once there since 2004.

Canberra weren't able to match bids for big boppers Shannon Boyd (Gold Coast) and Junior Paulo (Parramatta), but they have re-signed Josh Papalii for four more years, locked halfback Aidan Sezer and back-up hooker Siliva Havili in for another two years, and are close to new deals of the same length for both Sia Soliola and Dunamis Lui.

The Raiders do have some late competition for Lui's signature, with a Sydney club showing some interest off the back of his successful return from a knee reconstruction.

It's meant there's not much room left in the Green Machine's already tight salary cap.

Mulholland said it was unlikely off-contract Austin would remain in Canberra next year.

"At this stage probably not I'd say. We're just looking at options," he said on ABC radio on Saturday.

"Blake had an offer on the table last year and he rejected that offer, and as in the game you've got to move on and unfortunately he didn't take the offer up last year and we've moved on, basically.

"We've got some [space] in the salary cap, but not the amount that Blake would be requiring to stay at this stage.

"Things can change. He's obviously been looking around for a period of time and if circumstances change within our cap over the next month or two then there may be an option there.

"It's unfortunate, but that's the way it works with the salary cap. Everybody can't keep everybody, it's just a fact of life."

The running five-eighth's management has shopped him around to several clubs this season, including South Sydney and the Melbourne Storm.

Souths were happy with their halves, while it's highly unlikely the Storm would sign him.

He's been linked to Parramatta, who are looking for an alternative to Corey Norman, and English Super League club Leeds Rhinos.

The Raiders can't afford Norman's $900,000 wage for next year, while there aren't too many other halves on the market.

Mulholland said they had Sam Williams and Ata Hingano as options on their books to help replace Austin.

Williams is contracted for 2019, while Hingano has an option in his favour.

Hingano has played 25 NRL games in three seasons, but has mostly played out of position as a back-up hooker in his 10 Raiders appearances.

Mulholland said they would continue to keep an eye out for anyone who came onto the market.

"Something will crop up at some stage. If you spend everything too early in the peace and something happens at another club to give you the opportunity to sign a player you're better off having something in the powder keg," he said.