Expect to see Alex Bolt's bleached blond curls bobbing around the Australian Open if he wins this week's wildcard play-off at Melbourne Park.

Bolt, the No.1 seed in the play-off, is sporting a "top deck" chocolate-style dyed blond on top of his brown hair thanks to a mate's handiwork.

He's not a huge fan of the new look but the problem is that the South Australian hasn't lost a match in the month since doing it. 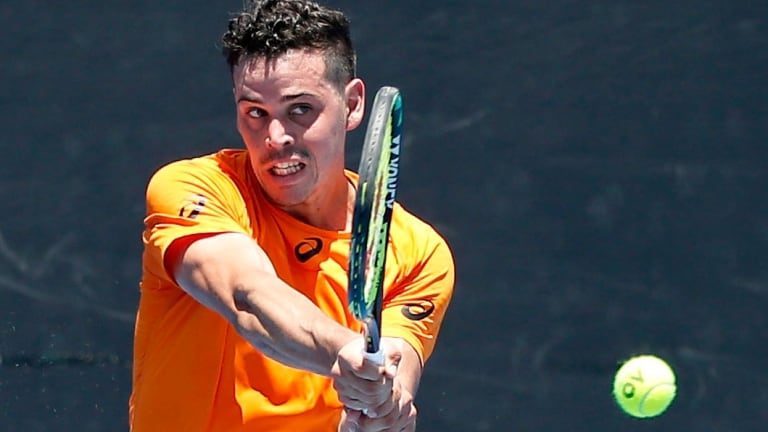 "It was a bit of boredom and peer pressure and I got stitched up," Bolt said. "There's been not too many good comments on it but if I win the play-off I might have to keep it because I haven't lost a match since I've had it so I might have to re-dye it for the summer."

"I was a bit disappointed in myself that I didn't convert a couple of the set points in the second but I felt like I regrouped pretty well and only lost two games in the last two sets so I bounced back," the 25-year-old said.

Ranked world No.159, Bolt said he'd had his best-ever year on tour.

He was given a wildcard into the Australian Open after impressing in the play-off final against teen sensation Alex de Minaur and then took Serbian world No.65 Viktor Troiki to five sets in the first round.

Bolt won through qualifying at Wimbledon and just missed entry into the US Open at the final qualifying hurdle.

"I qualified for Wimbledon for the first time, which was probably the biggest achievement I've had so far and then coming so close in the US Open. I feel like my tennis is in a really good spot at the moment."

He said his 2018 results reinforced he was on the right path with his tennis.

"I've been playing some tour level tournaments and playing the top guys and have been hitting with them and by doing that I feel like I belong at that level and belief is half the battle."

The women's quarter-finals will be played at Melbourne Park on Thursday.