Queensland-based stallion Better Than Ready has followed in the footsteps of the state’s premier sire Spirit Of Boom and his progeny are gaining momentum in the lead up to the $2million Magic Millions Classic on the Gold Coast on January 12.

Better Than Ready, based at Lyndhurst Stud Farm at Warwick, has been a revelation in the first three months of two-year-old racing this season, producing six winners with two black-type performers at Doomben last Saturday. 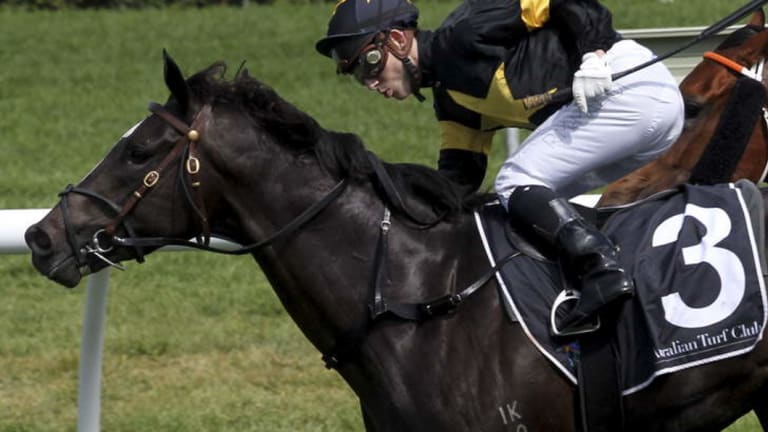 Revelation: former Randwick track 1200m record holder Better Than Ready’s progeny have had a stellar start to the season.Credit:Mick Tsikas

The near-black son of More Than Ready stood at just $9900 inc GST and has covered more than 400 mares since entering stud at Lyndhurst. This year the stallion has served 235 mares with 200 tested in foal and the farm had to reject more than 50 requests from breeders to be mated.

His winners at Doomben were The Odyssey in the Phelan Ready Stakes and Better Reflection in the Calaway Gal Stakes – both listed – to ensure berths in the Magic Millions.

Better Than Ready has had 16 two-year-olds go to the races since October and six have been successful with winnings of $514,675. He leads Brazen Beau and Rubick in the First Season Sire premiership. Spirit Of Boom had a meteoric rise last year and Better Than Ready’s performances are close to a carbon copy of the former.

Surprisingly, Better Than Ready has just two yearlings in the Magic Millions catalogue but the company have rallied to the stallion at their March Yearling Sales and expect to have 40 to 45 yearlings to be offered.

The Magic Millions group did this with Spirit Of Boom earlier this year and buyers throughout Australia and Asia converged on the Gold Coast, resulting in a hugely successful sale.

Better Than Ready won half his 16 starts and smashed the Randwick 1200m record held by Northern Meteor when he clocked 1:08.19 to win the Brian Crowley Stakes.

Unite and Conquer is currently favourite for the Magic Millions at $4.50 with Dubious, which runs at Eagle Farm on Saturday second fancy at $8.50. The latter has trialled brilliantly on two occasions in Sydney and the son of Not A Single Doubt is primed to score first-up.

Another first-season stallion has entered the Magic Millions spotlight in the shape of Coolmore’s Rubick after the impressive win of Yes Yes Yes at Flemington for Darren Weir.

Yes Yes Yes made the improvement from a debut second at Moonee Valley to score in convincing style and was one of the trainer’s four winners on the Flemington card, taking his season tally past 200 after just four months.

The win earned the $200,000 Magic Millions buy enough prizemoney to get into the Gold Coast race and give Rubick his first winner. The son of Encosta De Lago, which is related to champion Redoute’s Choice, won three of his eight starts and was an immediate success in the sale ring this year.

He covered 214 mares in his first season at stud in 2015 and his 2018 bookings made him one of the first stallions to fill his book with Coolmore keeping his price at $17,600.

Trainers have been glowing in their reports of Rubick’s progeny and he has a powerful representation at all of the major sales in 2019.

Brazen Beau is another stallion on the horizon and has produced two excellent winners from eight runners and earnings of $427,555. Wins in last Saturday’s listed Inglis Nursery with Accession and the Godolphin-owned Tassort in Rosehill’s Golden Gift have bolstered his earnings.

Kris Lees produced a likely winner at the Gosford barrier trials this week by Brazen Beau when Iconic Star showed brilliant speed to score over 800m.

Lees paid just $80,000 for the colt from the Coolmore draft and his two-length success was achieved in a most tradesmanlike display. Another two-year-old to impress at Gosford was the Paul Perry-prepared Pandano, a son of Arrowfield Stud’s Dundeel, which showed a great turn of foot to score comfortably in his 800m trial.

Arrowfield boss John Messara retained a share in Pandano after Perry paid $130,000 for the colt at the Inglis Classic Sale in February.

Dundeel is doing great things with his three-year-olds, which have been winning races regularly in Australia and New Zealand. He is another stallion with plenty of yearlings being offered at feature sales in Australia and Karaka.

Results at three city tracks down the east coast last Saturday provided some lucky vendors with a number of important pedigree updates of yearlings selling at the Gold Coast Magic Millions sale, which begins on January 9.

Starting with Randwick and Fell Swoop’s win in the black type Razor Sharp (Not A Single Doubt x Touched In Flight) was his 10th and took his earnings to $1.75million. Lot 239 sees his full brother selling. Lot 320 has a Zoustar half-brother to Seasons (Sebring) while Lot 459 is a brother to Strasbourg, which is sired by I Am Invincible.

Two winners came from the Flemington meeting. The first was Phoneme (Choisir x Hidden Message) and he has a full brother listed as Lot 651. Masculino (Smart Missile x Special Melody) won his fifth race and his half-brother is Lot 165, a colt sired by Wandjina.

At Doomben The Odyssey (Better Than Ready x Jessica’s Hope) won the black type two-year-old race to earn a Millions start and has a half-brother by Epaulette as Lot 1006 the following day. Outback Barbie (Spirit Of Boom x Pure Perfection) was runner-up to Zoustyle and has a half-sister selling by Written Tycoon as Lot 33.
[email protected]