Marcus Stoinis has given an insight on the toll the recent turmoil in Australian cricket has had on players, saying they are "drained" and "cooked" just two games into the home international season.

Australia can end another tumultuous week for the game on a high on Sunday if they defeat South Africa in Hobart and claim their first series win since the ball-tampering crisis, but the effects of the events in Newlands are still reverberating more than seven months later. 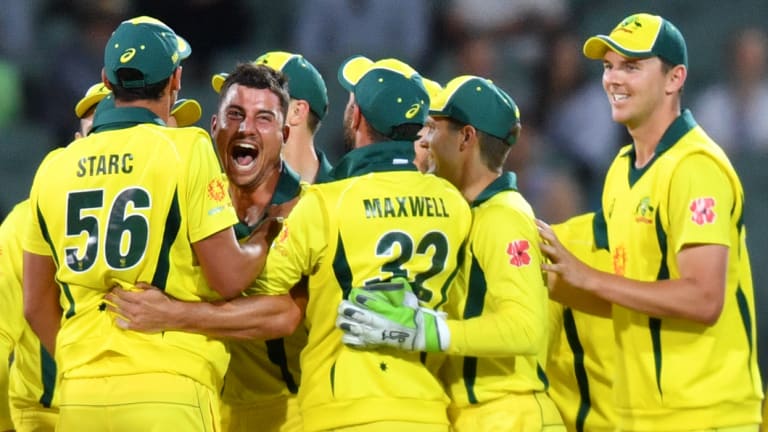 Breakthrough: Marcus Stoinis is mobbed after picking up another wicket in Australia’s much-needed win against South Africa in Adelaide.Credit:AAP

Due to the crisis that has engulfed the game, the Cricket Australia board has not had time to consider the submission by the players' union to lift the bans handed to Steve Smith, David Warner and Cameron Bancroft. That is likely to occur either this week or next.

The board is also consulting states to canvas their views on interim chairman Earl Eddings succeeding the ousted David Peever. Unless there is strong opposition to Eddings, an announcement could be made as early as this week.

Vice-captain Josh Hazlewood believes the narrow win on Friday night has released some of the pressure that has been building for months after series defeats in England and the Middle East across all three formats.

While it is only two games into an international summer that does not finish until February, Stoinis, whose vigorous celebration of a wicket caught the eye of social media, said the players are already feeling the effects of all the controversy.

Stoinis said Australia's woes with the bat could be attributed to the "noise" that followed the release of the Ethics Centre's scathing review into the sport.

"The season goes all year, every year, backs up to last year, haven't stopped, so it's been a long time.

"You've got to learn, that's part of the art of playing international cricket is dealing with noise."

As happy as the Australian camp has been with the way they have trained, winning provides validation. The win was just Australia's third in the 50-over format from their past 20 completed games, and ended a seven-game losing streak.

"It’s a good feeling to have a win but at the end of the day it’s only one. With how much there’s been going on in cricket it’s a good start just to get a win," Stoinis said.

Hazlewood said Stoinis's comments were more relevant to those who took part in the tour of the UAE. Thankfully for Australia, whose fortunes this summer ride heavily on their attack, Hazlewood and Pat Cummins did not tour while Mitchell Starc missed the Twenty20s but stayed in the Middle East.

"It feels more refreshed to be at home in Australia. We try and lift them when we come into the group, I think we've done that to a degree," Hazlewood said.

Australia's comeback with the ball took some of the heat off the side's underperforming batsmen.

Captain Aaron Finch, Shaun Marsh and Chris Lynn all made promising starts but could not set up the game by batting deep into the innings. Too much was again left to the lower order, which rallied due to an unlikely partnership between 10th-wicket pairing Hazlewood and Adam Zampa.

Without batting lynchpins Smith and Warner, Australia have batted out their 50 overs only once in seven games under coach Justin Langer.

"I'd rather not bat in the end, that's a goal for our batters to have a couple of established guys at the end and have our top six or seven face 50 overs," Hazlewood said.

"When you do that you put the opposition under the pump, especially the bowlers."