The post ball tampering era of Australian cricket has been dealt another setback turn with star quicks Josh Hazlewood and Pat Cummins ruled out of the series against Pakistan.

Already missing superstar duo Steve Smith and David Warner, Australia will be without two of its Big Three fast bowlers as they chase a rare series victory in Asia. 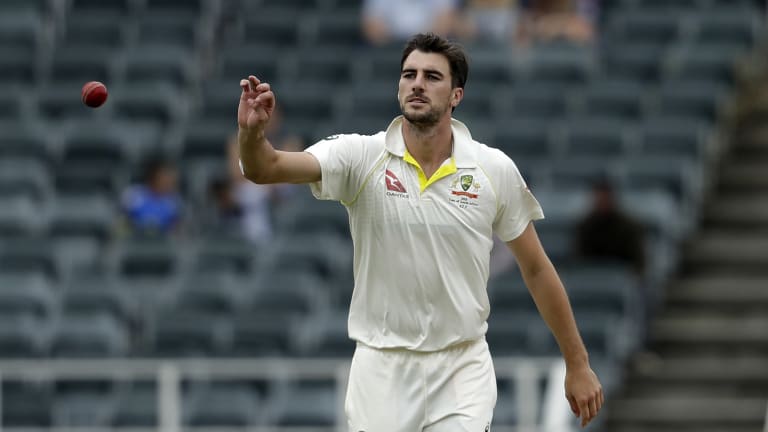 Injured: Pat Cummins will take no part in the Test series against Pakistan.

The absence of Hazlewood and Cummins, who are battling back injuries, leaves Tim Paine's new-look team with massive holes with bat and ball.

It is close to the doomsday scenario for the Australian team, who were humiliated 5-0 in a one-day series by England in coach Justin Langer's first assignment at the helm.

Much now rests on the shoulders of Mitchell Starc, who will spearhead an inexperienced attack on the flat tracks of the Persian Gulf.

Cummins and Hazlewood have not suffered setbacks but do not have enough time to be fit for the Tests in October. They are not said to be in doubt for the marquee series against India and could even be ready for the one-day internationals at home in November. For Cummins, it ends a run of 13 consecutive Tests, while Hazelwood is missing his first series since making his Test debut in 2014.

"Pat and Josh are progressing well from their lumbar bone stress injuries but are not bowling, so unfortunately they will not be at the level required for Test match intensity come October," Australia's team physiotherapist David Beakley said.

"Barring any setbacks, we are hopeful that Pat and Josh will return via the back-end of the JLT One-Day Cup, with the aim of them being available for the ODI series against South Africa in November as they build towards the Indian Test Series.

"On a positive note Mitchell Starc is back to unrestricted training and remains on track for the Test series against Pakistan."

The team that takes to the field for the first Test in the UAE will include at least five players who were not in the XI which wrapped up a 4-0 Ashes success in Sydney at the start of the year.

Australian players bristled last summer when James Anderson queried the depth of the country's fast bowling stocks, but it will now be put to the test.

Selectors are not flush with proven talent to choose from when they meet to pick the squad for Australia's first Test series since the ball tampering scandal in South Africa.

Selectors will keep a close eye on the two four-day games of the "A" series in India, where Chris Tremain, Brendan Doggett, Joel Paris and Michael Neser have opportunities to win berths on their first Test tours.

Reigning Sheffield Shield player of the year Tremain shapes as the frontrunner in that pack, having shown he can succeed on the unforgiving surface of his home MCG pitch.

Jackson Bird will also be in the frame for a Test recall having been on the fringe for several years but selectors may also opt for express quick Jhye Richardson as a like for like replacement to Cummins.