The match hasn’t quite got official "mockbuster" status, but it’s unlikely Channel Seven are particularly excited with how the cards have fallen for this Friday night's clash.

Six days after a forgettable loss to Fremantle in Perth, the Western Bulldogs host Carlton at Etihad Stadium. It’s hardly a match-up with top billing, but sometimes it’s the low-profile matches that are suddenly captivating. 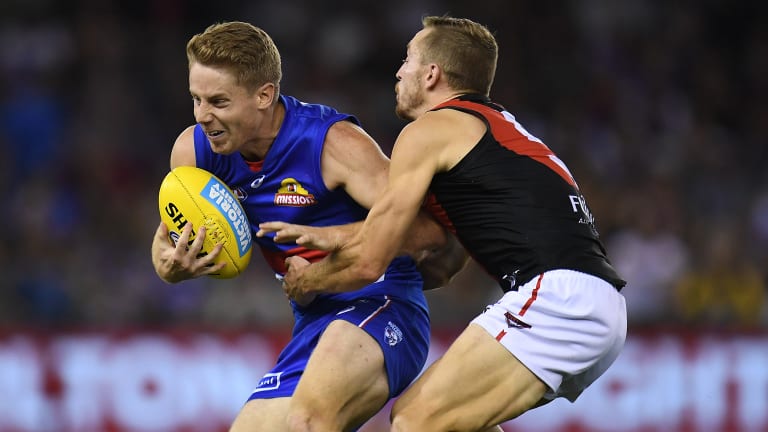 There’s plenty on the line for both teams. The Bulldogs are delicately placed with a 1-4 record and will be desperate to avoid their season going into freefall. At the same end of the ladder, Carlton are yet to post a victory and run the risk of starting a season with a 0-6 record for the first time.

Bulldogs coach Luke Beveridge, for one, knows his charges will be hell-bent on avoiding a repeat of last week’s 54-point loss to the Dockers at Optus Stadium, when the visitors were plagued by skill errors.

"We used the ball well enough in the previous couple of games to think that it wouldn’t have gone so south – in the west," Beveridge said.

"Hopefully the boys are on top of their game and a hell of a lot better than we were last week.

"As I said, it was a bit of a head scratcher to see it unfold like that. I don’t think we can be that bad again."

The Dogs, at the very least, will be bolstered by the return of Lachie Hunter and Bailey Williams. However, they are still without a string of experienced players in Clay Smith, Tory Dickson, Jack Redpath, Marcus Adams, Dale Morris, Liam Picken (indefinite) and Tom Liberatore (season).

“As far as age and games experience, there’s quite a few boys who are still on the sidelines,’’ Beveridge said.

“Our status at the moment and our demographic is relatively young and inexperienced.”

Carlton have injury woes of their own, with Matthew Kreuzer to miss again as club medicos err on the side of conservatism with the big ruckman and his groin complaint.

"He’s pretty much right to play," said coach Brendon Bolton. "However as a club we’re going to make a decision not to play just because his training has had no continuity.

"He’s feeling pretty good this week, but we just need more training into him, so he’ll miss.

"He wants to be out there, he’s a warrior.

"His injury is not significant anymore. He’s pretty much right but (he’s had) just no training.

"I think our medical team made a decision which is right."

The Blues are arguably "due" for their first win of 2018 after falling to West Coast by 10 points at the MCG.

"Almost due?" Bolton said with a wry smile. "Every week we’d like to be due.

"There’s just been some circumstances that have made it a little bit challenging.

"(But) our players are embracing that challenge.

"They had a really strong meeting as a group. They’re determined in this next block of games to keep growing and look for the little wins even though (last week) wasn’t the result we totally wanted."