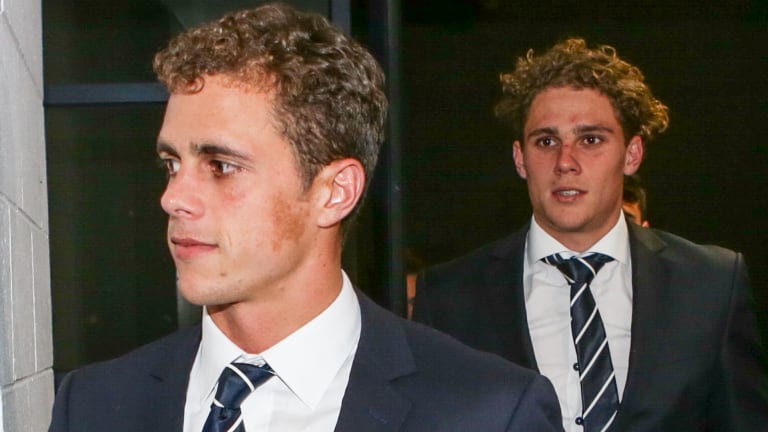 Brothers Ed and Charlie Curnow arrive at the tribunal.

Charlie and Ed Curnow are both free to play against Melbourne on Sunday after being cleared of making intentional contact with umpires during the Blues’ breakthrough win over Essendon at the MCG on Saturday.

Both Curnows pleaded not guilty to the charge of making intentional contact with an umpire, arguing that they had instead made careless contact.

AFL tribunal jurors Wayne Henwood, Jason Johnson and Stewart Loewe took less than five minutes to decide that Charlie should be held to the lesser charge, leading to a $1000 fine.

They took 12 minutes to conclude that Ed was guilty of making careless contact, also meaning he was fined $1000.

Charlie Curnow claimed he didn’t realise he’d touched umpired Matt Stevic’s arm until he saw a picture of the incident in the newspaper on Monday. He said he’d been trying to stop other players from entering a scuffle between Blue Jed Lamb and Essendon’s Mark Baguley.

Stevic was not at the hearing but the parties agreed that Stevic didn’t recall the contact, wasn’t threatened by it, and didn’t have a problem with what occurred.

However AFL counsel Andrew Woods argued that Charlie had been looking at Stevic only moments before making the contact, suggesting it was hard for him not to know he’d touched the umpire.

Ed claimed his contact with the chest of umpire Nathan Williamson – which followed Ed giving away a free kick to direct opponent Zach Merrett – came as he told Williamson that he understood the reason for the free kick. Woods showed a replay of the incident to suggest Ed was looking at Williamson when he made the contact but Ed said he had no recollection of touching Williamson and only found out he had done so after the game when notified by a club official. Williamson wasn’t present either but also didn’t have an issue with the contact made to him.

Woods tried to distinguish both incidents to the Sheed example, arguing that both brothers had been aware of the respective umpires’ presence.

The decisions follow an extraordinary couple of rounds in which four AFL players have been charged with making intentional contact with an umpire. Geelong forward Tom Hawkins was last week suspended for one match for making contact with umpire Dean Margetts, but Gold Coast captain Steven May successfully fought his charge at the tribunal on Monday night, escaping with a fine.

Those charges had followed a recent AFL letter to clubs to indicate a crackdown on umpire contact.