Port Adelaide kept their top four hopes alive with a grinding win over a determined Carlton at the MCG, overcoming a scoreless third quarter to run out 21-point winners.

But it wasn't easy as Carlton once again proved tough to play against.

With stalwart Kade Simpson reaching 300 games, Carlton just had to produce an honest and energetic performance to honour the qualities that best represent the skinny veteran.

And in the first quarter they did, with five goals and an intent to defend with the sort of desire Simpson always displays. 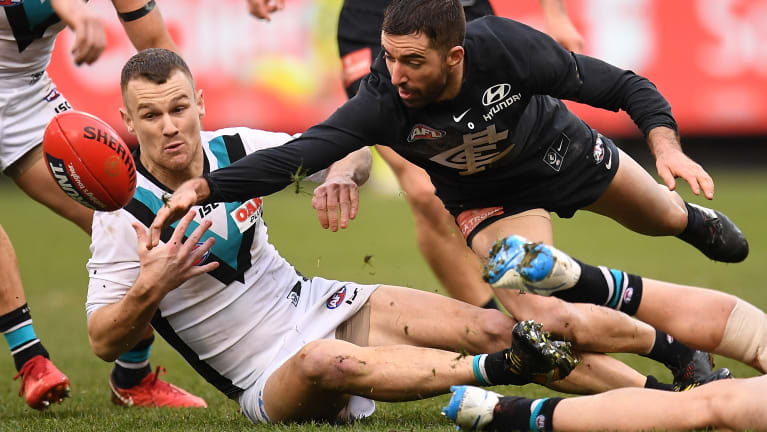 A customary lunge from the 34-year-old veteran to touch the ball before it bounced over the goal line in the first quarter told you all you needed to know about Simpson's never-say-die career.

That endeavour is also something Carlton's best players possess and the trio – Charlie Curnow, Patrick Cripps and Marc Murphy – all kicked goals with Curnow picking off where he left off six days earlier in his breakout game against Collingwood.

The classy trio were capable of matching Port Adelaide's talent and the footy smarts and the Blues led at quarter-time with five goals on the board.

But once Port's stars got rolling in the second quarter it seemed that Carlton would have no answer. 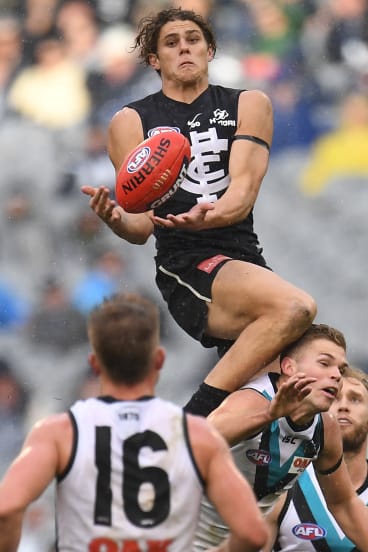 It was soon after a goal review denied the Blues a goal to start the second quarter, when Jarrod Pickett inadvertently touched Jarrod Garlett's kick in a manner reminiscent to hand ball in soccer, that momentum shifted.

Two goals to the classy Robbie Gray and one to Chad Wingard, courtesy of a 50-metre penalty when Blues' youngster Cameron Polson breached the protected area, and the game was on Port's terms.

The Blues dropped anchor inside their back 50 and Todd Marshall as Justin Westhoff both added to the tally as Carlton retreated.

They didn't kick their sixth goal until they received a free kick on the half time siren.

That kick, from Pickett, gave Carlton a pulse although down 19 points.

And a pulse was all that was needed to get the blue blood flowing with the third quarter effort outstanding.

They smothered and harassed and blunted Port Adelaide to keep them scoreless for the third quarter and drag the margin at the last break to just two points.

The Blues could have been in front too except for a score review once again denying Garlett a goal when replays showed the ball clip the back of the padding around the goalpost as it sailed through.

By then rain had set in as though in tribute to the long-sleeved lad from Emerald in Victoria who just kept cracking in to rebound the ball, slender enough to stay dry in the downpour. 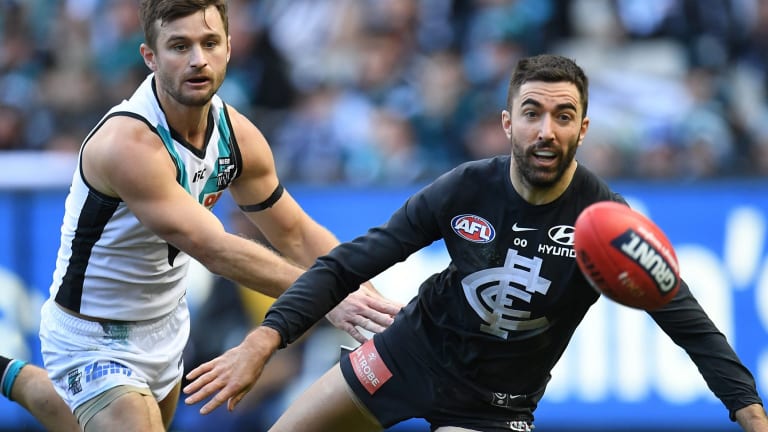 Curnow made it look dry too, flying for marks and the Carlton crew found voice but another 50-metre penalty against the Blues gave Port a deep forward entry that Steve Motlop pounced on to goal.

One minute later Wingard kicked a brilliant dribble goal and, as the sun reappeared, the Blues' resistance disappeared.

All bar the shouting for Simpson and a Carlton line-up that can go with their opponents for a period but are not yet capable of winning.