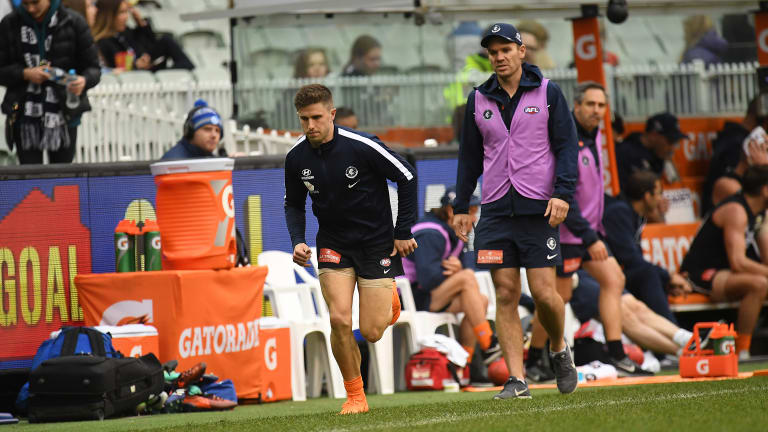 Marc Murphy tests out his foot on the weekend.

Carlton will continue to monitor skipper Marc Murphy after he disrupted scar tissue in his previously injured left foot.

The Blues haven’t officially ruled Murphy out of Saturday night’s clash with Geelong at GMHBA Stadium, but it’s understood they will give him a couple more days to recover after his foot troubles resurfaced in Sunday’s heavy loss to Melbourne.

The veteran midfielder had only just returned from a month on the sidelines following a flare-up with his plantar fascia, an issue which arose minutes before the round four loss to North Melbourne.

Murphy spent an extended period off the ground in the first half of the match at the MCG, although he returned to play out the game, finishing with 19 disposals and a goal as the Blues were crushed by 109 points.

Murphy, 30, is out-of-contract at season’s end, prompting some commentators to suggest he seek a move to a rival club in order to maximise his chances of claiming an elusive premiership, given the Blues are languishing at the foot of the ladder as they continue to rebuild under third-year coach Brendon Bolton.

However Murphy has been in discussions with Carlton about a new two-year deal.

Murphy has been a loyal servant to the Blues, playing 240 games since being drafted at pick No. 1 in 2005, during which time Carlton have only made the finals four times. He has captained the club since 2013, with defender Sam Docherty and midfielder Patrick Cripps viewed as the favourites to succeed him.