Andrew Bogut says the NBA v NBL preseason games have laid the platform for NBA teams to play in Australia in the future.

The Sydney Kings centre led his side in a clash with the LA Clippers in Hawaii on Monday and while the Kings fell 110-91, they were in the fight for much of the game as were Melbourne United against Philadelphia 76ers last week. 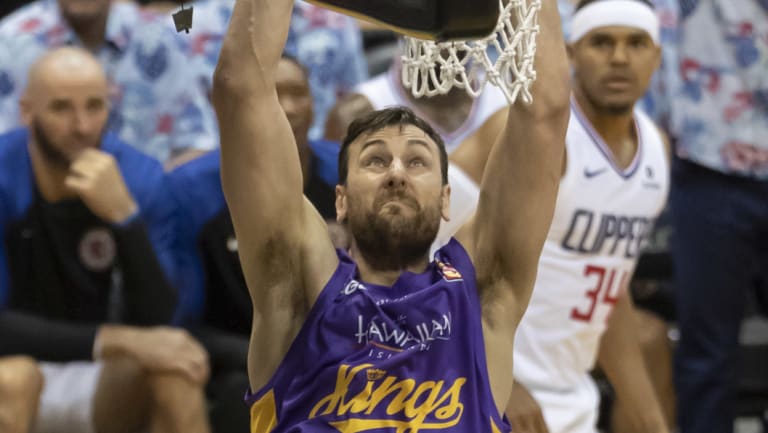 Andrew Bogut in action against the Clippers.

Bogut said he presumed NBL boss Larry Kestelman and his team were doing all they could to build goodwill with NBA bosses in New York, with an eye to having teams come out to Australia as the continent has never hosted an NBA game.

This is the second season NBL sides have ventured to the US and while they have yet to beat an NBA team, they have been praised for their tough play and ability to push NBA stars early in their pre-season.

Basketball Australia and the NBL teamed up with the Victorian government to bring Team USA to Marvel Stadium in August next year for two marquee games against the Boomers ahead of the FIBA World Cup in China but Bogut says an NBA game would be a step beyond that visit.

Bogut thinks the NBA v NBL concept has a future but the NBA may move away from Australia for a time to broaden their horizons.

“I think it does [have a future] but I think the NBA will continue to go to different countries as they try to expand their game,” Bogut said.

“The next step for us is to get an NBA game in Australia. That is the goal of all this, I presume. We say 'yes please, yes thank you' to the NBA for a couple of years and hopefully we will be rewarded with a game on Australian soil.

“That’s not the USA team. That is Philly [Philadelphia 76ers] playing Melbourne in Melbourne or whatever it is.

“That would be sensational for the game and hopefully this is a momentum builder for that.

"Obviously Perth didn’t help us out a couple of nights ago, no disrespect to them, they had a stinker and you have those, we did a better job tonight and hopefully the rest of teams and Perth in their next game can correct that.

“Hopefully they [the NBA] keep looking at us as a viable prospect for the future.”

Bogut also praised the Kings for making improvements at both ends of the floor following underwhelming results at the NBL Blitz the previous weekend, with Daniel Kickert returning from a calf problem to score 13 points.

“Credit to the team, you don’t see many teams put their starters back on in the fourth quarter and they did that, they were trying to win the game,” Bogut said.

“Most teams I’ve been a part of in the NBA in those first, second and third pre-season games you only play your starters 15 minutes, 20 minutes max and you let your bench guys play.”

Adelaide 36ers gave the Kings lots of trouble while defeating them at the Blitz and the two clubs face off twice in the opening two rounds, so much of the Kings focus has already turned to slowing the up-tempo Sixers.

“I thought for the first three and a half quarters we were sensational and everyone was committed to being physical, talking and taking their shot and I think it was a good step for us towards facing Adelaide in two games in two weeks,” Bogut said.

“We still have a way to go but we got better tonight. We know Adelaide play at even a faster tempo than the Clippers do and we need to figure that out quickly.”