South Africa and Argentina are both aiming to put behind them a disappointing few years on the international stage and seek a new beginning in their opening clash of the Rugby Championship at King's Park on Saturday.

The Springboks have already gone some way to banishing the memories of their barren years since the last World Cup under coach Allister Coetzee, with new tactician Rassie Erasmus engineering a 2-1 home series win over England in June. 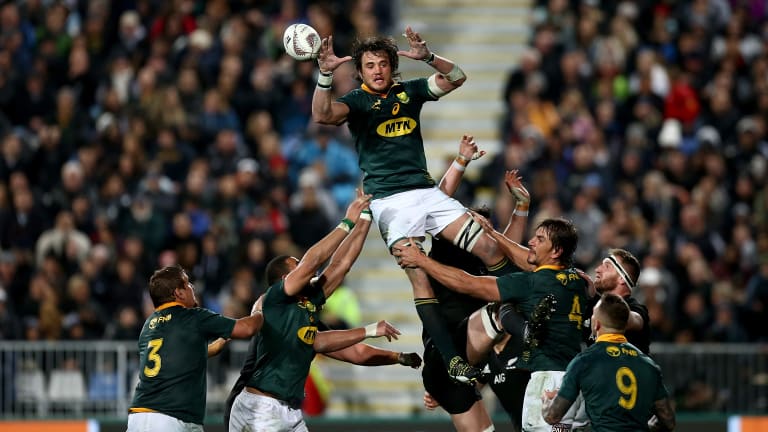 New heights: The Springboks are aiming for a strong start to the Test season.

Argentina will be seeking a similar tonic from their new coach, former international hooker Mario Ledesma, who will take charge of the side for the first time in Durban having replaced Daniel Hourcade at the helm.

The South American side has won just two of its previous 18 Tests, and those victories came against Italy and Georgia, but with a stronger showing from Ledesma’s Jaguares in Super Rugby in 2018, who make up the bulk of the Argentina side, there is hope for a turnaround in fortunes.

Erasmus admits he is unsure how the visitors will play, except that it will be a tough, physical battle in Durban.

"We are a bit unsure about what to expect from this Argentina side," Erasmus said. "They will probably play like the Jaguares did in Super Rugby and the stats show how much that team ran the ball.

"However, it is Test rugby and they may kick a bit more this weekend."

Those gains are tempered by the loss of Duane Vermeulen, who has been allowed to play club rugby in Japan and skip the southern hemisphere championship.

"We’ve had to rejig our back-row dynamic," Erasmus said. "We’ve got a lot of speed in the back row now, but we also have guys who can poach and force turnovers.

"We will have to get the balance right when guys like Malcolm go off later in the game, though. We have to stop them from getting momentum at the rucks."

The visitors have selected Saracens prop Juan Figallo following a three-year absence after he was given special permission to play at the request of Ledesma, trumping Argentina’s rule about not selecting overseas players.

He is one of six changes from the side that lost 44-15 at home to Scotland in June and comes in at tight-head prop in a switch to the front row, with Nahuel Tetaz Chaparro moving to loose-head and Javier Diaz out of the side altogether.