Brendon Bolton's string of losses as coach of Carlton grew longer on Saturday night, and yet again he found himself delivering what was almost a sermon to the faithful about believing something good will happen again, one day.

His assessment of how things lie at the club after losing to the Adelaide Crows by 55 points is not totally unfamiliar, given the Blues sit 0-7. But one can imagine it is not easy confronting the media and trying to offer hope week after week. 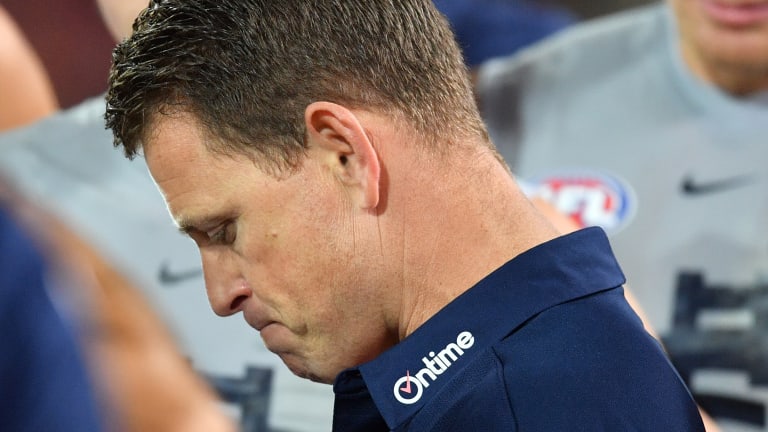 In Bolton's world, losing is never acceptable, and with that comes those cliches for which he has become renowned.

Just how anyone could explain how the Blues played well enough to recover from a 31-point quarter-time defecit, stifle a very good opposition with admirable intensity, capitulate and then revive themselves in the last quarter is challenging, to say the least. Once more, Bolton simply reverted to his only option – delivering more words of hope. And most are actually reasonable to digest.

“You can see that they (his players) are trying really hard,” Bolton said. “There would be issues if we were just totally giving up the fight.

“It is my duty as coach to make sure the morale and vibe is strong around the footy club, so we keep looking for those small wins. The leaders are doing a lot in that space.

“The players are learning from every game, and provided they are doing that they feel positive about coming to work and that's important.

“We're not happy that we lose the game – our players are really frustrated as are our coaches. But when you can look through the cloud and the emotion after a loss, Paddy Dow kicks his first goal and you can see the smiles. There are lots of little signs.

“There are blue skies ahead, and the supporters who have been with us from day one on this journey, they can understand it. Our supporters need to understand we were challenged and challenged heavily (by Adelaide) in the first and third quarters. We got some growth in how we were coming out of defence and we need to win the contests on a more consistent basis than what we do.

“Personally, I churn after a loss. I'm human. I feel for our supporters. I feel for our coaches and players who can't get that positive vibe just yet from a win, and I hurt in and around that because I am human like anyone else.

“But I love going to the Carlton Football Club every day … our players are trying really hard and I get positivity because of the want they have to grow and learn. That brings you out of a cloud after a loss after a day or two.

“The biggest thing that I am applying right now is to understand that my persona, the way I carry myself in terms of attitude, voice tone and expression rubs off on everyone in the footy club.

“I have a duty to nurture these guys, particularly the young guys who are inexperienced. I need to make sure that is in check and don't get blurred and totally angry just over losses. I care about the character of our players because they're strong about how they're feeling.”

The diehard Carlton fans have heard much of this before, but in these situations what else does a coach say?

Significantly, Bolton reminded us he is taking it harder than anyone else with these losses, and picks himself up off the floor with the simple thought that something good will happen again one day.

This Saturday is another day; Carlton v Essendon at the MCG. Bolton just sees it as another match to be won, but of course the Blues faithful see it as much more than that.