Essendon chief executive Xavier Campbell preached a message of unity to the club’s players behind closed doors in the aftermath of Saturday’s circuit-breaking loss to Carlton.

In a move which is believed to be unusual but not unprecedented, Campbell addressed players briefly in the rooms after coach John Worsfold had delivered his own message following the game.

It’s understood Campbell urged players and staff to stick together and that everyone at the club shared in the Bombers’ predicament following their defeat to the previously winless Blues, a result which left Essendon at 2-6.

While it is not the first time Campbell has spoken to players as a group after a game, it’s believed such a move is rare. 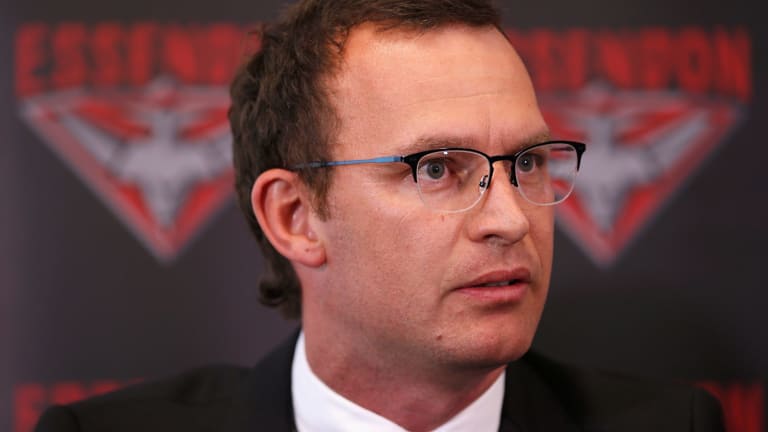 Less than two days after Campbell’s message about a united front, game performance coach Mark Neeld departed the club after his job was made redundant.

Campbell told the club’s website earlier in the week that 2018 was not a lost cause for the Bombers.

‘‘The season’s not over and we’re not looking at it one bit that the season is over,’’ Campbell said.

‘‘John flagged there’ll be some changes and we’re not afraid to make the changes necessary to ensure the improvement is made and that progress in this football club is made for our future.

‘‘As he flagged, we’ll probably see that in selection later this week. We had a really good win in our VFL team and there’s some players who are really pushing hard for selection and I can’t see why we’re not going to be rewarding those players based on what’s John’s had to say.

‘‘I think that’s important and I think our fans are keen to see that.’’

“They’ve been doing a review internally, and they decided to make the position that he was doing, which is basically a director of coaching role, redundant,” Pickering said.

“It’s not the hands-on coaching role, so they’ve decided that is a redundant role. That is exactly how the conversation went.

“Going by my discussion with Neeld yesterday, that isn’t the case [that he was sacked].

“They came to an agreement that he can either go back and do this other role, which he has no interest in doing, which is basically getting out there and throwing balls to players and all that sort of stuff, or take a redundancy package, which he has done.”