Norwich had threatened an upset when Onel Hernandez chalked off Junior Stanislas’ first-half opener on 70 minutes. 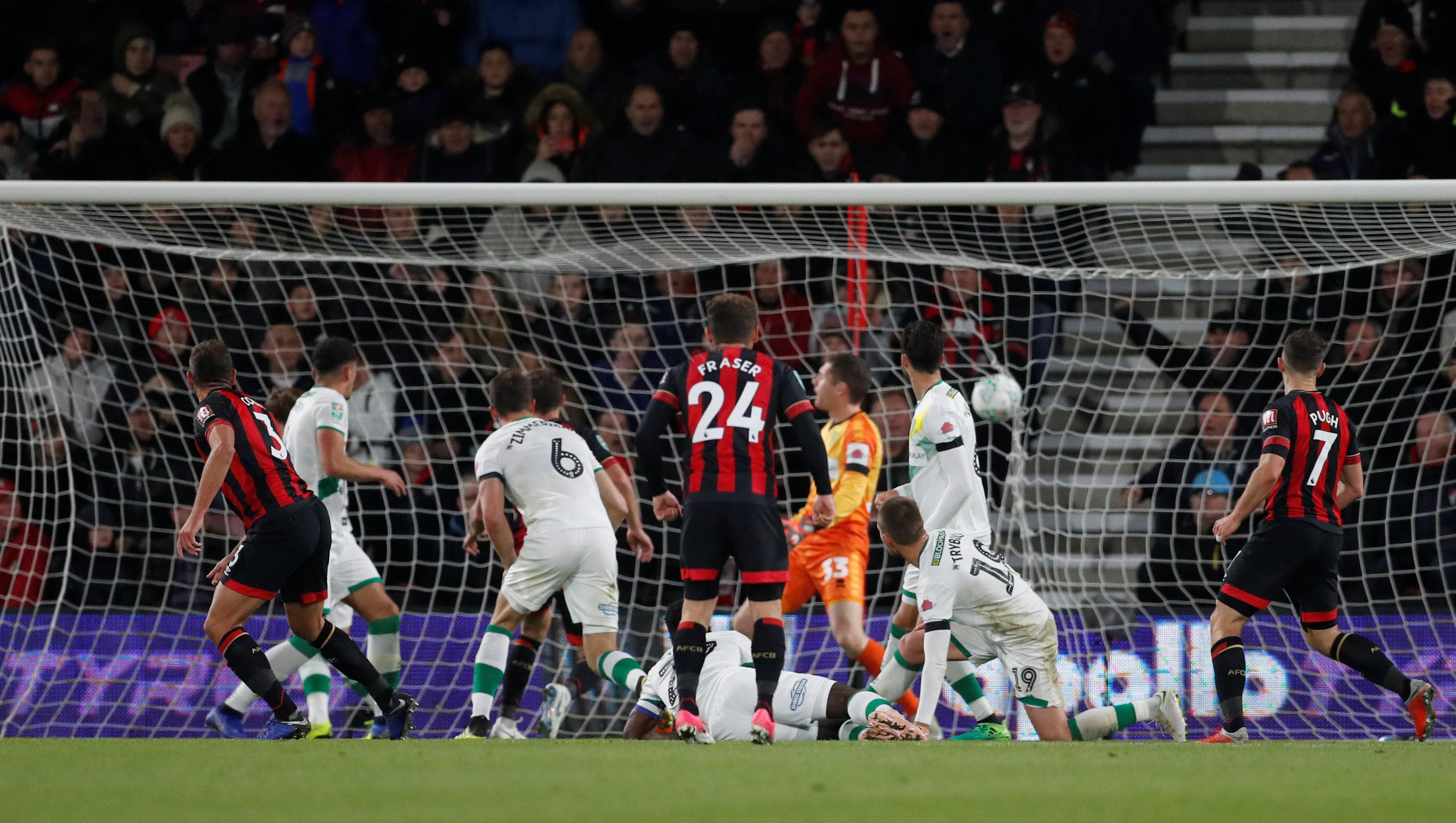 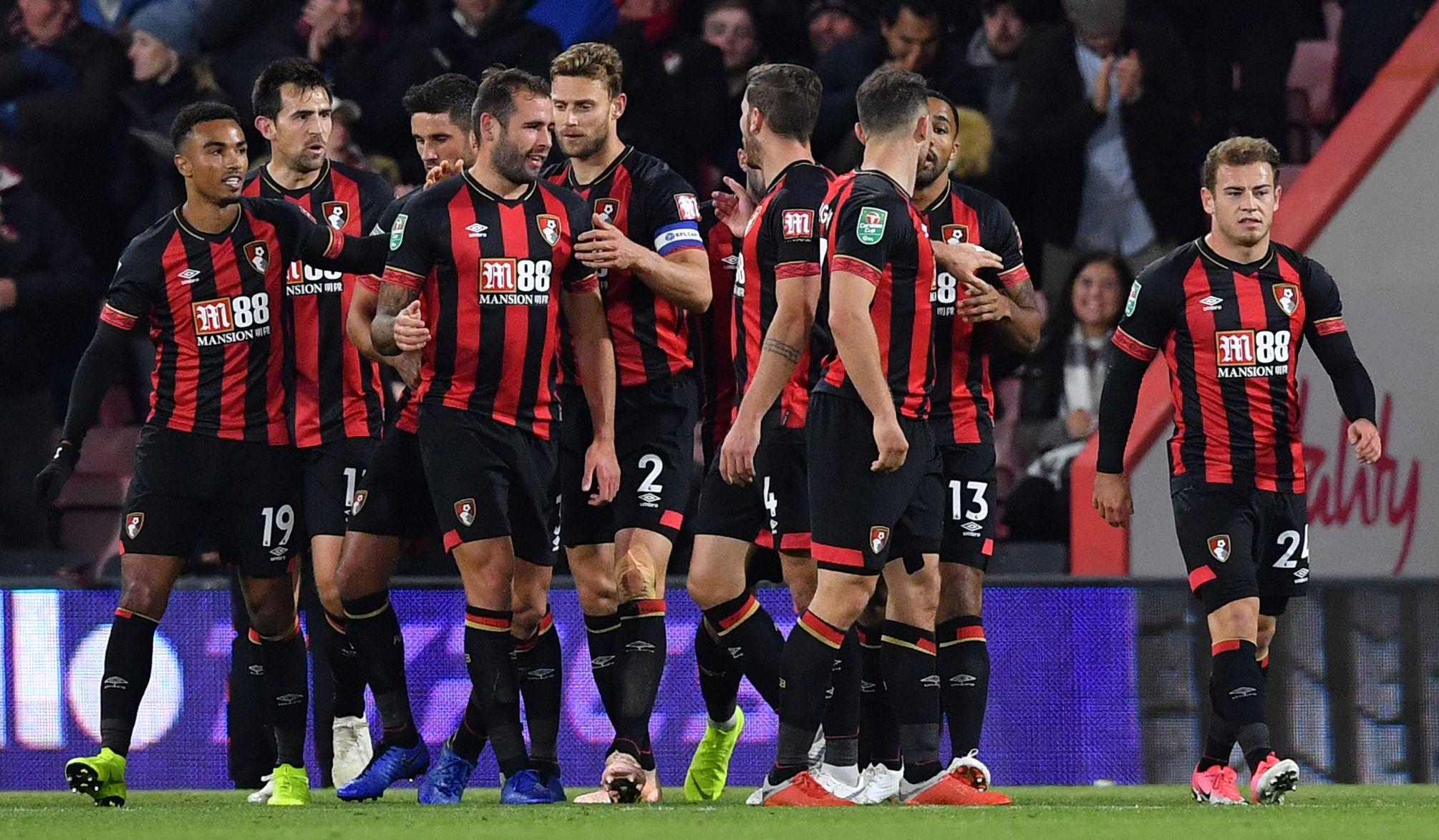 But defender Cook served up a tasty finish just three minutes later to put Eddie Howe’s high-flyers in the hat for the quarter-finals for the third time in five seasons.

The last time these two played each other came in Bournemouth’s 3-0 home Premier League win in January 2016.

Most have become squad players rather than first-teamers though through age and Howe slowly upgrading the quality of his troops. 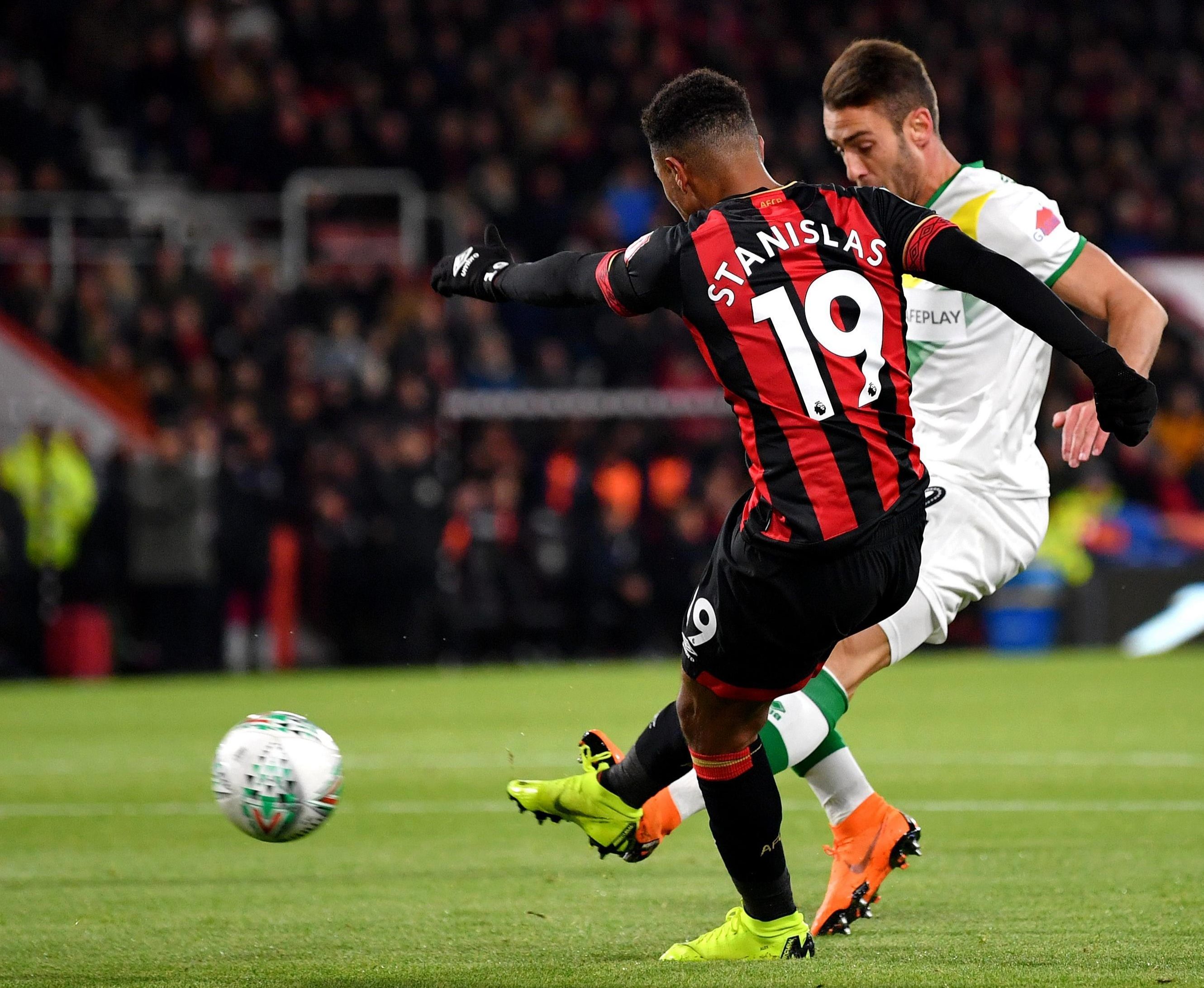 He made eight changes from the comprehensive win at Fulham, with Jermain Defoe starting in the competition for the third time this season.

A minute’s silence in honour of those who lost their lives in the Leicester helicopter tragedy was impeccably observed by all in the ground.

Norwich, who also made eight changes, had been in hot form with eight wins in their last ten.

And their confidence showed as Mario Vrancic fired just wide inside two minutes.

For all Defoe’s Carabao Cup action, he has been restricted to just 14 minutes of league involvement this term.

The ex-England striker looked rusty as he curled a superb early chance just wide of the post when Marc Pugh cut back to him ten yards out. In his pomp, the net would have bristled.

But Defoe made up for it with his classy assist for Stanislas’ opener.

Controlling a long ball on his chest, the 36-year-old laid an inch-perfect pass into the path of the winger, who cut into the box and fired a brilliant shot into the top corner. 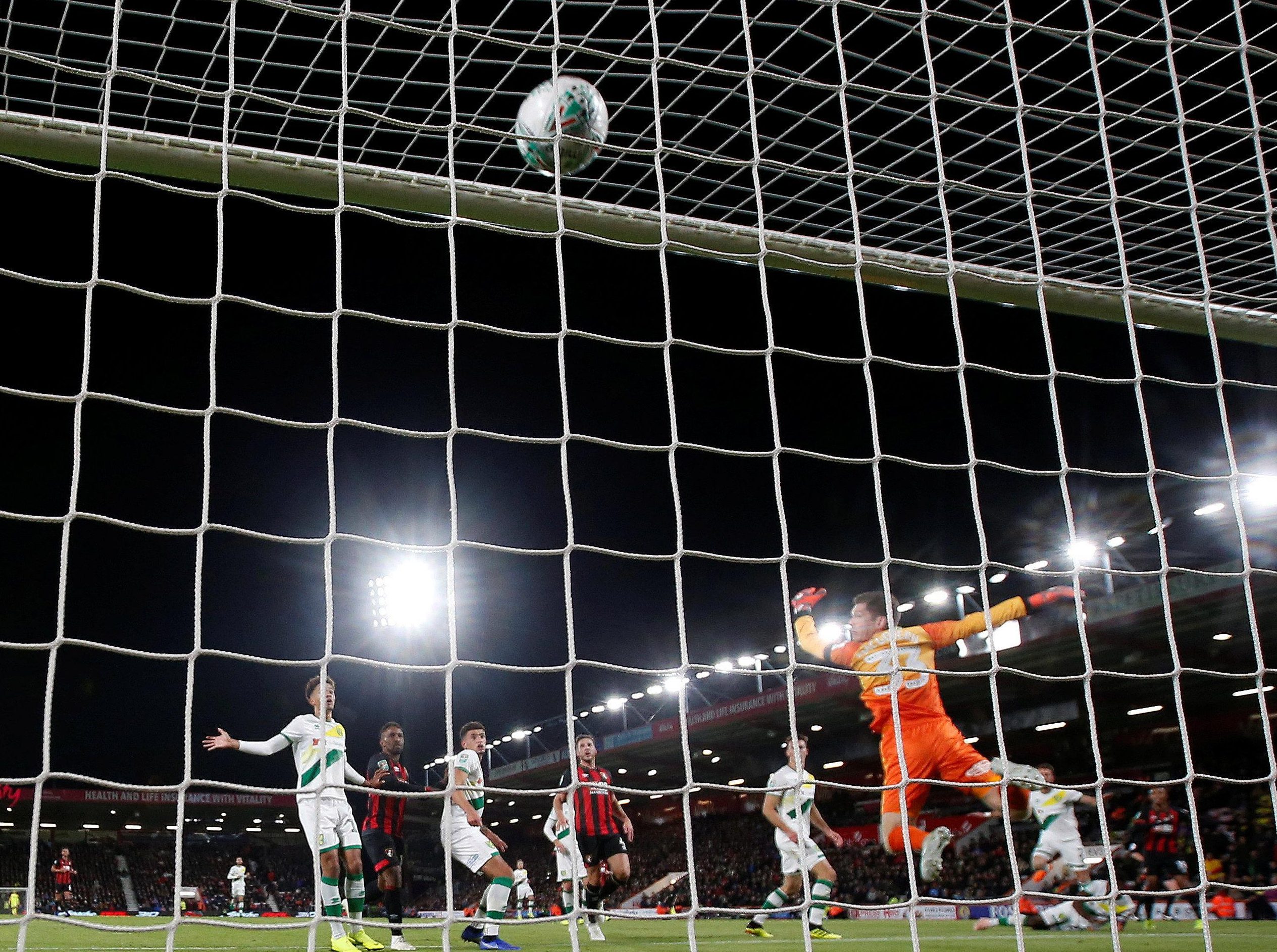 Any home fans expecting Norwich to collapse were in for a shock though as the visitors created but wasted THREE glorious opportunities to level before half-time.

Two fell to striker Dennis Srbeny, who was repelled by Artur Boruc when played clean through and then struck the inside of the post.

Midfielder Tom Trybull then had a header from a corner cleared off the line as the home backline wobbled.

Daniel Farke’s men continued to press for an equaliser after the break with the impressive Hernandez seeing a low shot turned on to the post by Boruc on 66 minutes. 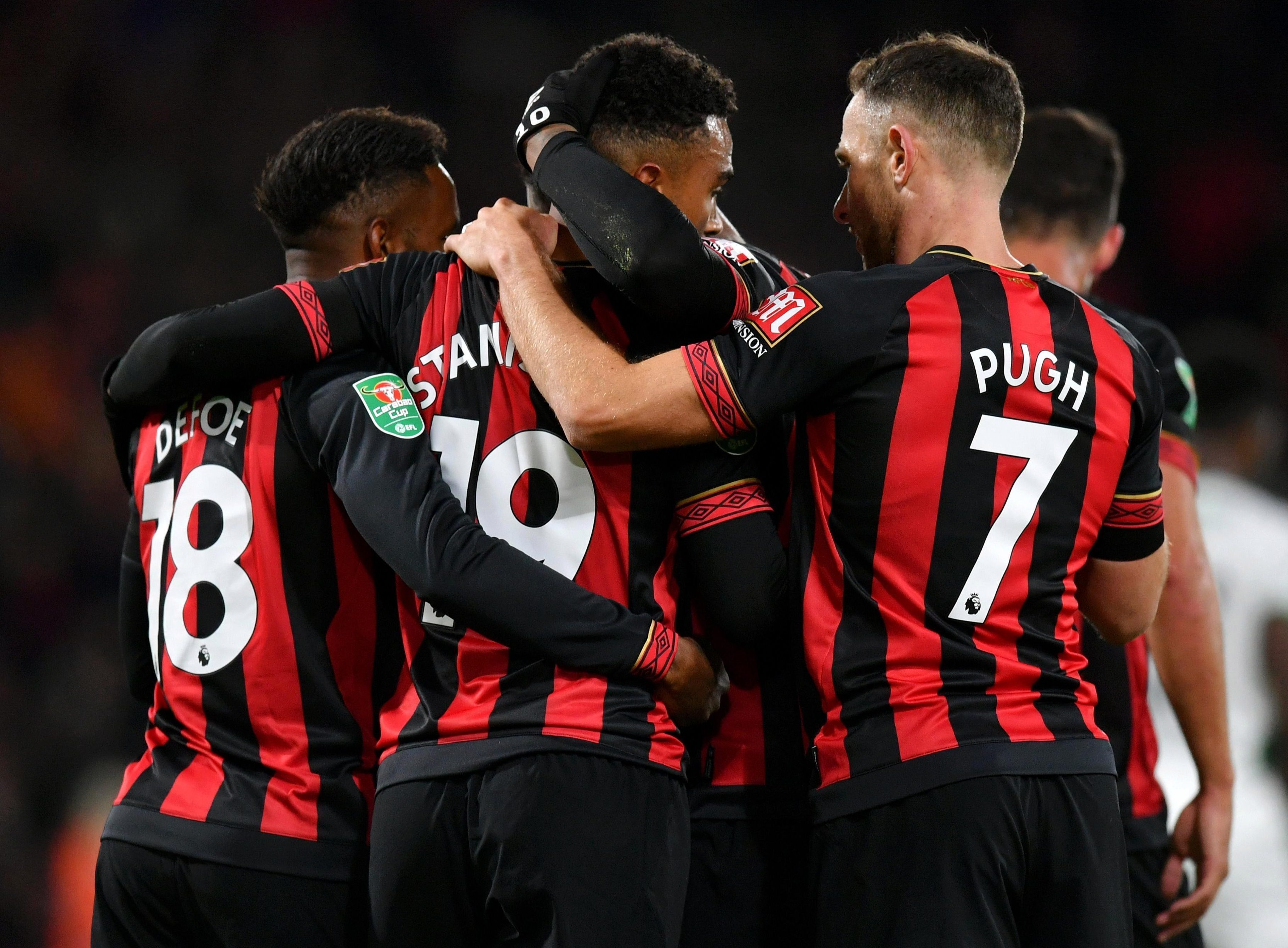 Bournemouth did not heed the warnings and four minutes later, the visitors restored parity as Hernandez cleverly took down Trybull’s flick and neatly turned past Boruc.Howe responded by bringing on Callum Wilson for Defoe and within three minutes they were back ahead again.

Norwich made the criminal mistake of letting a corner bounce in their box and eventually the ball fell to defender Cook, who lashed low into the net. 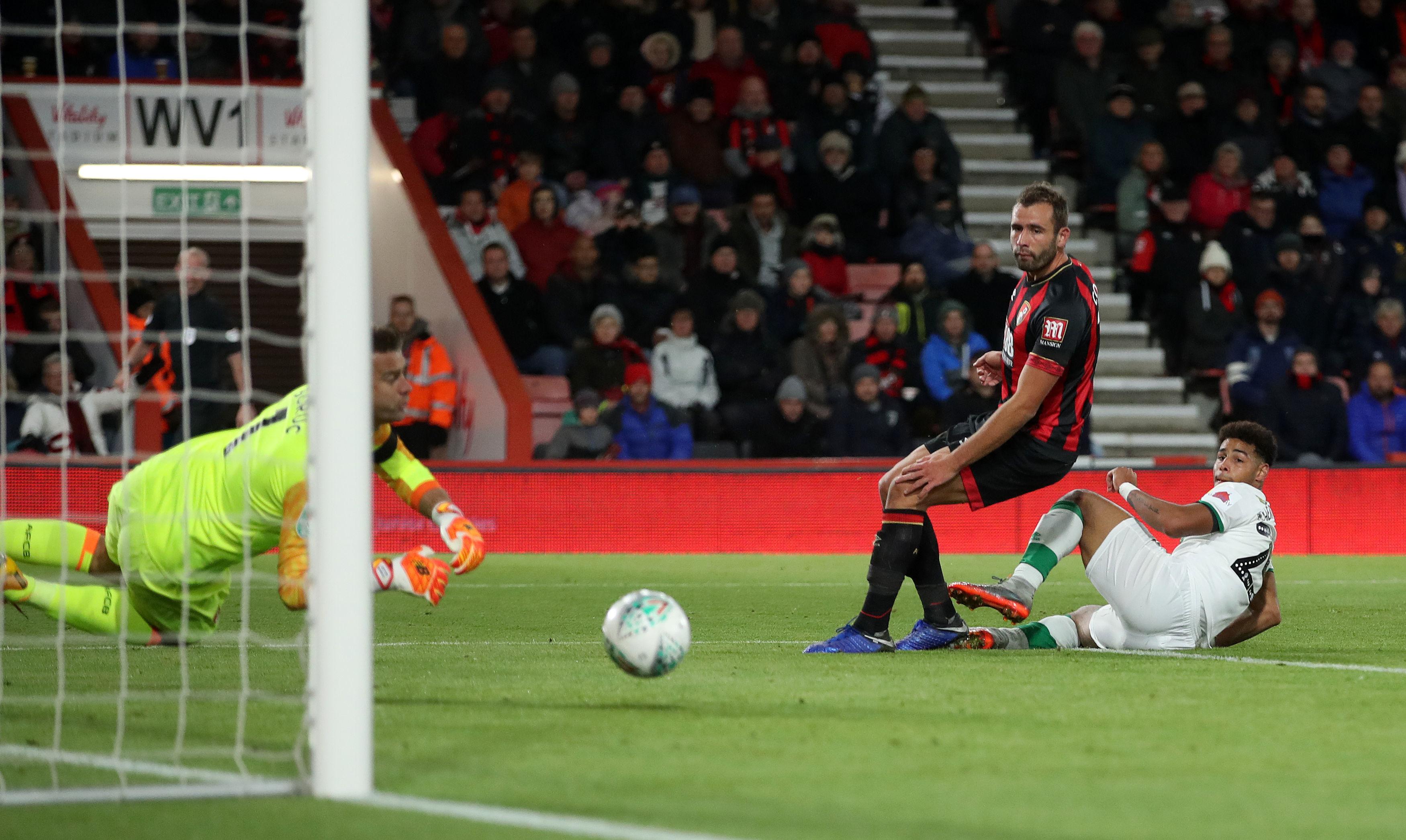 Howe knows his side were not at their best but knows they are in a great position to reach the final stages of the competition.

He said: “Norwich played really well. We were below par but we got through.

“We looked disjointed, maybe because of the changes. We lacked a sharpness and a fluency.

“It was a big goal for Steve, historically he has always come up with the spectacular, this was a scrappy effort but it was a really important one.

“We’ve made this step, now we want to go one more. To make the semi-final is a huge motivation for us.”

His opposite number Farke felt hard done by but knows Rhodes' miss was crucial.

The Canaries boss said: “Sometimes football can be pretty unfair. We were the better side today. We missed an unbelievable amount of chances.

“If I could wish for one player to be in this situation it would be Jordan. In 40 attempts, 39 times it is a goal. Today it was one of those days.”

In the night's other fourth round clash, League One Burton stunned Nottingham Forest 3-2 to reach the League Cup quarter-finals for the first time in their history.