As far as endorsements went, it was was glowing enough to illuminate a small stadium. If Brad Fittler thinks Wayne Bennett is any judge of a footballer, then James Roberts can start being sized up for his first Blues jumper.

Amid the refereeing outrage that followed Brisbane's two-point win over the Bulldogs was a convincing pitch from the supercoach to the rookie New South Wales mentor, who must decide whether the babies will be thrown out with the bathwater at the selection table. 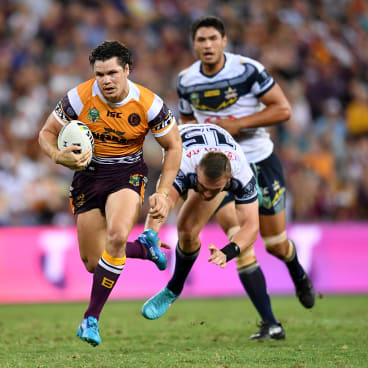 NSW calling: James Roberts has been one of the best for the Broncos this season.

In the centres, at least, Fittler has little choice but to opt for new blood. With incumbents Josh Dugan and Jarryd Hayne both set to miss the opener through injury, a pair of vacancies have emerged.

There are some quality applicants, with Latrell Mitchell from the Roosters getting deserved support as well as Euan Aitken from the in-form St George-Illawarra Dragons.

Roberts can be out of sight at times up in Queensland but Bennett was keen to ensure he's not out of mind at the selection table. The Kempsey-born 25-year-old has enjoyed a strong start to the season and was in the thick of things at Suncorp Stadium on Thursday night.

Bennett was asked about Roberts' Origin credentials after the match but that didn't mean he was obliged to wax lyrical. There has been times over the years when Bennett has dismissed such questions, or been honest enough to say club football was the right place for a particular candidate.

On this occasion, he dived right in, saying he felt Roberts was finally ready to take the next step in his career, even if it would deprive Brisbane of one of their strike players for periods of the next few months.

Fittler may be wise to listen. While Bennett has been under pressure at various stages of the season, his endorsement still carries a good degree of weight, while Roberts could be the point of difference NSW need to try and claw back a series off the Maroons.

"He is doing the things I haven't seen him do in the past. That's the tough things that you have got to do at Origin level when it is not going for you," Bennett said.

"You just knuckle down and do your job and not become a liability. I think he is in a good place to be able to do that [for NSW]."

For years, Roberts was viewed as an attacking specialist with limited defensive skills and a tendency to fade in and out of matches. Raw pace was his best weapon and he would often find himself loitering out wide, waiting for someone to fling him the ball so he could do this thing.

That was never going to fly for a modern centre, who is expected to pull his weight in getting the team up the field and be one of the better defenders on the park.

Bennett has seen that growth in Roberts since he arrived from the Titans two seasons ago. He has rebounded from off-field issues, including an alcohol addiction, to put himself firmly in the picture for the Blues ahead of game one at the MCG.

"He was all flash and show when he arrived here," Bennett said. "When he was not getting the ball, he kind of didn't want to participate.

"Two years on he has learned how to be a good pro, and learned a lot of things that are making the difference for us without the star 50m run.

"His defence is really good. He's probably the most heavily marked guy in the game – everyone knows you can't give him half a metre.

"I am just pleased he is doing a lot of the little things that he didn't do when he first got here. He is a bit of a rock for us at the moment."

With Queensland to utilise Greg Inglis and Will Chambers in their three-quarter line, Roberts' speed could be a matchwinner for the Blues if he can steal a march on his bigger opponents.