Valentine Holmes will compete against a British rugby union try-scoring speedster and a Brazilian judo champion for a place in the NFL's 2019 International Player Pathway Program.

The NFL announced on Thursday (Friday AEDT) the former Cronulla backline ace is one of seven international athletes who will enter the IMG Academy in Florida next month under the supervision of running back coach Earnest Byner, offensive line coach Paul Dunn, linebackers coach Pepper Johnson and wide receiver coach Larry Kirksey. 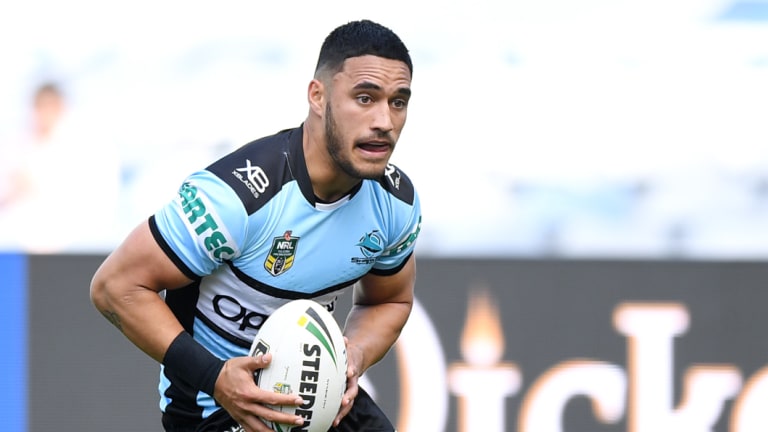 Selection: Valentine Holmes will compete with a variety of international athletes as he chases his NFL dream.Credit:NRL Photos

The 23-year-old Holmes, identified by the NFL as a potential running back, wide receiver and kick returner, is not guaranteed a place in the pathway program or a contract with an NFL team.

He will compete against English rugby winger Christian Wade, Brazilian judo champion Durval Neto and four others from Germany and Mexico who have backgrounds in American football.

After two months of intense training at IMG alongside NFL veterans and NFL Draft hopefuls, Holmes and the six other contenders will showcase their talents to club scouts in March.

If they impress they could be signed as a free agent by an NFL team or be selected for a 2019 NFL team practice squad position through the pathway program.

Former South Sydney Rabbitohs junior Jordan Mailata entered the program a year ago and was so impressive he was drafted by Super Bowl champions the Philadelphia Eagles.

One of the NFL's eight divisions, to be chosen at random, will receive successful international players via the pathway program.

The NFL, in its press release, described Holmes as a "professional rugby player from Australia's National Rugby League" who "represented Australia in the 2017 Rugby World Cup and scored five tries (touchdowns) in the quarter-finals" and a record six tries in the semi-finals.

The international players competing against Holmes for Pathway contracts are:

Represented the English rugby team at U16, U18 and U20 levels. Was selected to the British and Irish Lions squad and his 82 Premiership Rugby tries ranks third on the league's all-time list. A projected running back, he has high athletic ability and a versatile skill set.

Plays in the German Football League's top division for the Schwabisch Hall Unicorns.

Born in Togo, moved to Germany in 2007, played for the Cologne Crocodiles of the German Football League and was signed and then cut by the Arizona Cardinals in 2017.

Played for the Stuttgart Scorpions of the German Football League before playing as a tight end at the University of Tennessee.

Played in multiple domestic leagues in Mexico and was selected on Team World to play the USA U19 team.