Leicester City boss Brendan Rodgers says he is happy for his side to be left out of the Premier League title conversation after an eighth win on the bounce kept the Foxes second in the table.

Leicester thrashed Aston Villa 4-1 at Villa Park on Sunday to move back within eight points of league leaders Liverpool, who beat Bournemouth a day earlier.

Rodgers, whose side are six points clear of last season’s champions Manchester City, is happy for Leicester to keep going about their business under the radar.

“I don’t think anybody expects us to be anywhere near the top,” said Rodgers.

“We respect that and we just get on with our job, get on with trying to play and improve our performance levels.”

The Northern Irishman has guided the Foxes to more points after 16 games of this season than they earned at the same point when they won the league under Claudio Ranieri in 2015-16.

Leicester face both Liverpool and Manchester City over the Christmas period.

“It’s just natural – Manchester City and Liverpool are both incredible teams in the league and have shown last year how good they were,” added Rodgers.

“For us, we know that we are constantly trying to improve and look to close the gap. But I thought today we looked like a top team.” 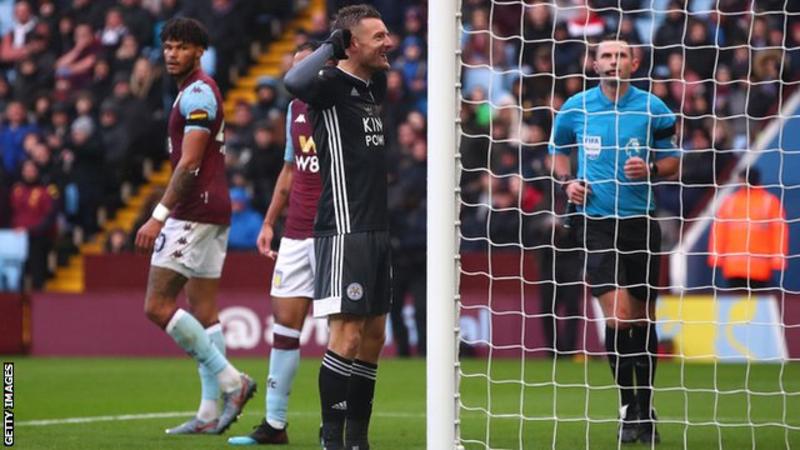 Jamie Vardy netted twice in the win at Villa to take his tally in the top flight this season to 16 goals.

That’s five more than any other player.

“Jamie is such a top-level player,” said boss Rodgers about a striker who has scored in eight successive games.

“He is always ready when the chances come; you don’t think there’s any doubt he is going to score.”

The goalscorer pounced on Kelechi Iheanacho’s pass to tuck away his first after rounding goalkeeper Tom Heaton, despite mis-hitting his initial strike, and then sprinted clear to tuck home a second late on in a classic Leicester counter attack.

It was his 25th goal in the Premier League since Rodgers was named Leicester boss in March – eight more than any other player in the division.

“He is very hard to play against because he is such a threat,” added Rodgers. “His first goal – his movement, [it was] a great pass by [Iheanacho] who plays him in.

“The second was what you would say is a ‘Jamie Vardy goal’.”

Vardy is the first player to net in eight games on the trot since doing so himself in 11 successive matches during the Foxes’ run to winning the title in 2015-16.

He is also only the second player, alongside former Manchester United striker Ruud van Nistelrooy, to achieve such a feat on more than one occasion.

So, as the most ruthless Englishman in the division, shouldn’t Vardy be a certainty to make Gareth Southgate’s England squad for next summer’s European Championships?

Rodgers says his man deserves to be in the reckoning, but the 32-year-old effectively retired from international football at the beginning of last season – before his current boss arrived at the club.

England boss Southgate said last month he was prepared to recall Vardy but wanted to give younger players in his squad an opportunity.

Spurs striker Harry Kane is the Three Lions captain and Chelsea forward Tammy Abraham, second in the Premier League scoring charts with 11 this term, has also earned his chance for the national team.

“If you are talking about being deserving, he would be in it a long time ago,” explained Rodgers.

“It’s his choice. I think he is enjoying his work at Leicester, he is enjoying his international break where he is able to rest. He is one who also knows that probably Harry Kane will play. He is the captain, he is going to play.

“He may as well enjoy his break while he can get it.”