Birmingham: Virat Kohli rode his luck before delivering a batting exhibition in a brilliant innings of 149 to keep India in sight of England on a gripping second day of the first Test. 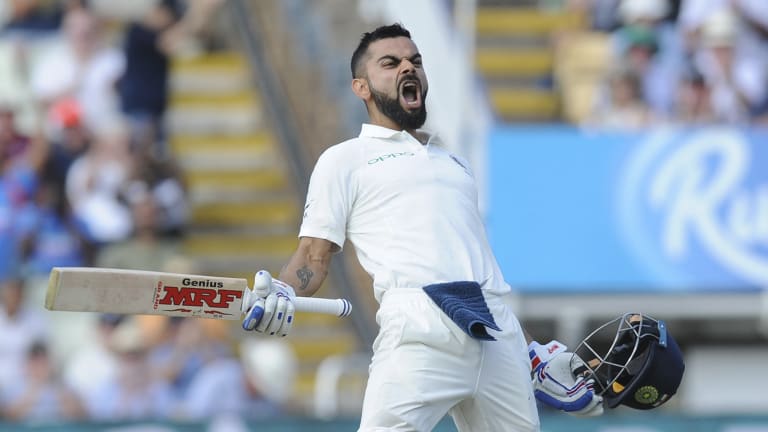 Kohli made England pay dearly for dropped catches when on 21 and 51, blazing to his 22nd Test century – and first in England – to end a sorry run of scores on English soil.

In fact, his total beat the combined scores in his 10 previous innings in England from India's tour in 2014.

After he was the last man out with about 30 minutes left of the day, the India captain was given a standing ovation, with England fans showing their appreciation of one of cricket's box-office talents.

Kohli opened his shoulders late in his knock and finished with a total of 22 fours and a six off his penultimate ball as he successfully hogged the strike to demonstrate his excellent game management.

England started the day by adding just two runs to their overnight score of 9-285, and ended it with Ravichandran Ashwin bowling Alastair Cook for 0 with a fantastic delivery, in a carbon copy of the opener's first-innings dismissal.

England swing bowler Sam Curran took three wickets in eight balls before lunch – removing Murali Vijay (20), Lokesh Rahul (4) and Shikhar Dhawan (26) – to reduce India to 3-59, before the tourists were given a testing first hour of the afternoon session against a ball that swung around.

But Kohli just about survived. He was dropped by Dawid Malan at first slip on 21, edged three times short of fielders behind the wicket, then glanced another edge through the right hand of the diving Malan when on 51.

In going past 39, he'd already bettered his top score from the 2014 tour and soon England was on the defensive, spreading the field.

Kohli proceeded to dominate the bowling with a variety of shots to the boundary.

As he steadily ran out of partners, Kolhi managed to keep the strike in what proved to be a memorable 225-ball knock before being caught by Stuart Broad off Adil Rashid.

England will hope Jos Buttler will be able to bat on Friday after he went to the hospital during the lunch interval for an X-ray on his left middle finger, which he injured while fielding.