A record-equalling four tries from winger Corey Oates has helped Brisbane grab sixth spot and a home final with a 48-16 NRL win over Manly at Suncorp Stadium.

It what loomed as Sea Eagles coach Trent Barrett's final game, Brisbane showed no mercy as Oates became the seventh Bronco in their 30-year club history to cross for four tries in front of 41,538 fans to put long-suffering Manly fans out of their misery.

It was billed as ex-Test prop Sam Thaiday's final home game for Brisbane but the veteran will return to Suncorp Stadium on Sunday when the Broncos host St George Illawarra in an elimination final. 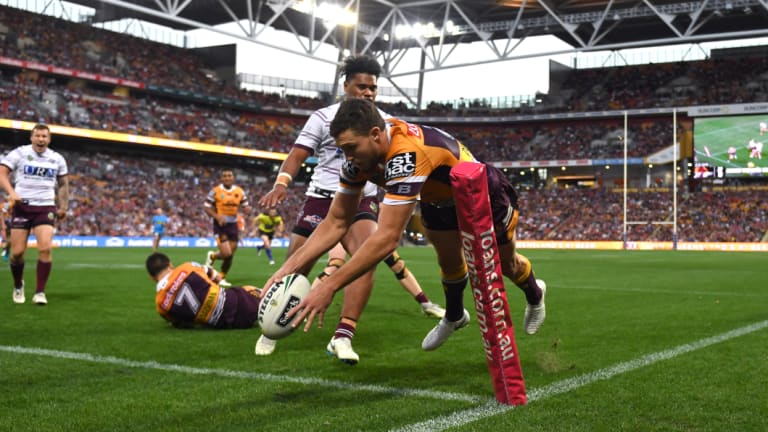 Broncos flyer Corey Oates soars into the corner for a try in a commanding performance.

Oates got off the mark in just the second minute off an Anthony Milford grubber and had a double by the 26th when he flew high to intercept a Daly Cherry-Evans kick near his own line before galloping away to score.

He grabbed a hat-trick by the 50th after five-eighth Milford collected a Manly kick near his own line and booted ahead for Oates to score.

Oates crashed over again in the 58th, joining Steve Renouf, Wendell Sailor, Karmichael Hunt, Justin Hodges, Denan Kemp and Israel Folau as the only Broncos to have bagged four in a game.

Oates thought he had an outright record fifth in the 79th but it was disallowed for off-side.

Manly's woeful season is finally over – and it appears Barrett's time at the helm after a public fallout with management.

His assistant John Cartwright is tipped to take over the reins.

Not much had gone right for the hapless Sea Eagles this year and the script didn't change on Sunday when fullback Tom Trbojevic came off concussed in the 30th minute after copping a stray knee in a tackle from Brisbane's Joe Ofahengaue.