Brisbane Lions in 2019 are a different AFL beast

A year is a long time in football, just ask Brisbane and Port Adelaide.

The two teams meet at the Gabba on Saturday in an AFL match-up that's a far cry from the corresponding round three fixture last year. 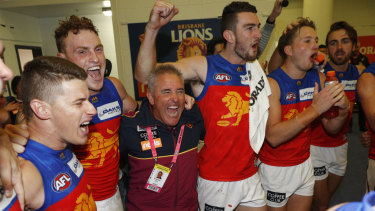 Chris Fagan and the Lions celebrate after their second win of the season.Credit:AAP

In 2018 the Power went to the top of the ladder with a five-point win at Adelaide Oval while the Lions slumped to an 0-3 record.

Brisbane are a different opponent for Ken Hinkley's men in 2019 however having accounted for premiers West Coast in round one and North Melbourne at Marvel Stadium last weekend.

"It'll be Interesting to see how both clubs have progressed over the year."

Brisbane were given a pre-game boost with recruit Lincoln McCarthy cleared to play after proving his fitness from a rib cartilage injury.

It means the Lions will head into the match with an unchanged line-up for the third week running.

After beating the Kangaroos for the first time in seven matches last weekend, Fagan's men face another bogey team in the Power.

Port have won the past five against the Lions and Fagan said going three from three for the first time since 2010 would be a big moment for his team.

"We're aware of the fact they're a team that has dominated us, just like North had last week," Fagan said.

"On our journey if we want to be any good we've got to start beating a few of these teams, so it's natural enough we set ourselves to do that."

The Lions will also face former captain Tom Rockliff after he proved his fitness earlier in the week.

"It'll be interesting for him," Fagan said.

"I reckon the onus is on the guy coming home to play against his old club, there's a bit more pressure on him than there is on us."