After a very bad day last weekend, this was a very good night for Brisbane. Best get used to it. The Broncos have the deepest array of young talent in the NRL and their demolition of Penrith was a taste of what they can deliver in coming years. 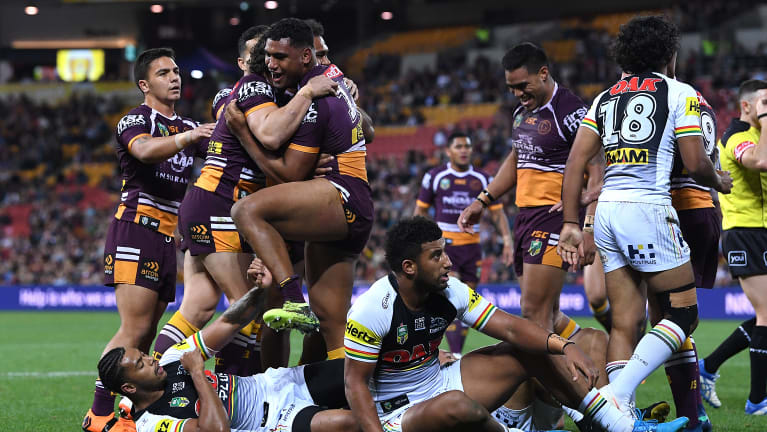 Opening blitz: Tevita Pangai celebrates after powering over for the Broncos in Brisbane.

This season is probably too early for the Broncos, although the Panthers may disagree. Down 32-0 at half-time, they were flogged 50-18 at Suncorp Stadium in a blow to their top-four hopes. Plus, Jarome Luai has a serious ankle injury that saw him leave eight minutes before the break.

When you line up the recent form, the magnitude of the result didn't make a great deal of sense. Last Sunday, Brisbane were flat as a pancake in a 26-6 loss to the Warriors. That was the same team the Panthers walloped 36-4 the previous weekend.

Throw all that out the window. From the moment it began in Brisbane, the Broncos were dominant, aggressive and clinical. Their first half saw them complete 20 from 21 sets, all played at pace, most played in the Panthers' half, five of them ending in tries.

Tevita Pangai Jnr was a beast in the back row, crossing twice in the opening 12 minutes to have Brisbane soaring at 18-0. His skills and footwork are a thing of wonder and it would only take a phone call from Brad Fittler to have the Newcastle-raised, Tongan representative on the NSW books next year.

If Payne Haas, who has played 36 minutes of NRL, is worth $3.4m over five years then what price Pangai Jnr? He's been among Brisbane's best all season and is yet to put pen to paper on his next contract. 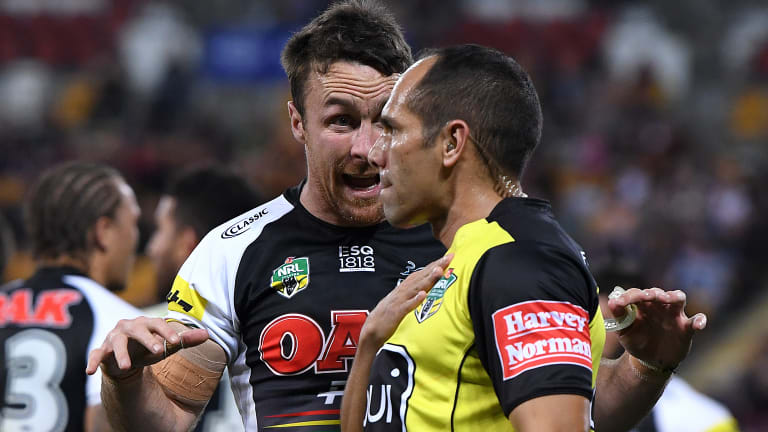 It doesn't look like he's going anywhere and if he stays, he would be one of the centrepieces of a rising Brisbane forward platoon that already has crazy amounts of upside. Jayden Su'a was already on the cusp of Origin and teenager David Fifita could end up better than them all.

Their forward dominance set up the win early on but Wayne Bennett's tweaks to the side looked to be judicious. Jamayne Isaako had twin ankle injuries but was sharp at fullback, while Darius Boyd was a defensive rock after being moved to the centres. 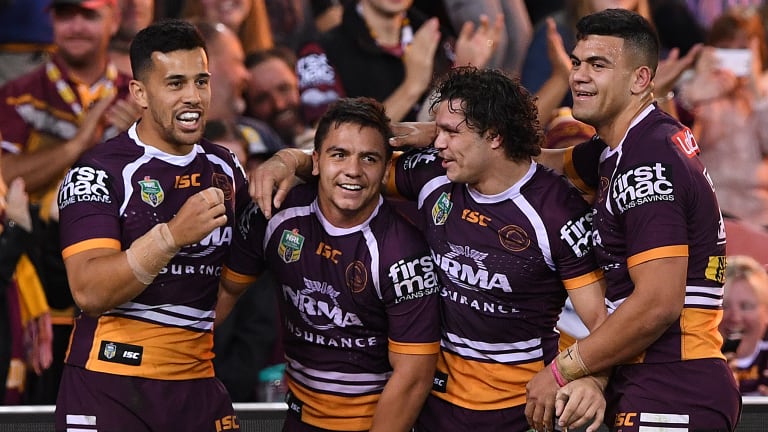 Stampede: Brisbane mob Kodi Nikorima after he adds to the try tally.

Penrith looked at their best when Brisbane's first-choice forwards were cooling their heels on the bench, or in the case of Pangai Jnr icing a hamstring that kept him out for the latter stages of the contest.

Brisbane missed him badly when he was out of commission. His 31 minutes was deeply influential and Bennett can only hope the injury is only minor, given Matt Gillett remains out of action with a neck complaint.

Viliame Kikau was a constant danger for the Panthers, who scored all of their points in the second half as the Broncos wobbled.

For a brief period, on the back of quickfire tries to Waqa Blake, Josh Mansour and Tyrone Peachey, they seemed to threaten a miracle comeback but a Kodi Nikorima double ensured the margin was exceedingly comfortable at the end.

The first came off yet another James Maloney pass on a short side raid. He had his pocket picked by the Broncos halfback, who scampered away to score untouched. Nikorima did the same to Dean Whare in the 75th minute to get his side into the roaring 40s, then Matt Lodge earned them the half century in the dying moments.

With Canberra's controversial defeat in the early game, the Broncos may need just one more victory to ensure they play a part in the finals. With their young stars growing in confidence every week, they could be the side everyone wants to avoid.