The former doctor for some of Britain’s most successful cyclists and teams was found guilty on Friday of ordering a banned drug that he knew would be used to enhance a rider’s performance.

The ruling, a stunning end to one of the highest-profile doping cases in cycling since Lance Armstrong’s drug scandal almost destroyed the sport’s credibility nearly a decade ago, raised new doubts about the successes, and the methods, of some of the world’s top cyclists of the past decade.

The doctor, Richard Freeman, worked for the Tour de France-winning Team Sky and also the British Cycling Federation, which oversees the country’s Olympic program. He was found guilty by Britain’s Medical Practitioners Tribunal Service of ordering testosterone, a steroid, for an unnamed rider in 2011. The tribunal said Freeman did so “knowing or believing” the drug would be used to help a rider or his team win.

The tribunal also said Freeman, the lead doctor for Team Sky from 2010 to 2016, concocted a series of lies to cover up both the drug purchase and its intended use.

The case had dragged on for two years and it continues to raise serious questions about Team Sky, now called Ineos Grenadiers, which is one of the most dominant teams in cycling history and has featured champion riders like Chris Froome and Bradley Wiggins. 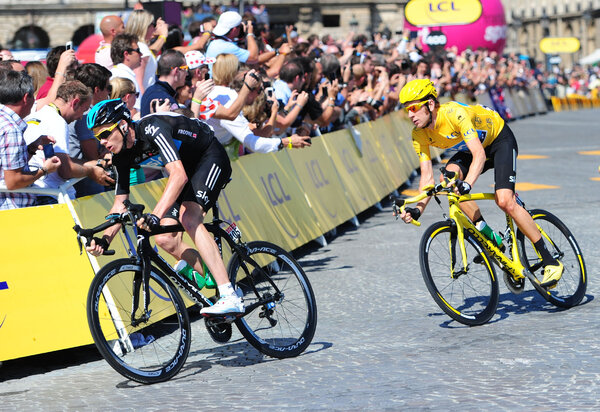 Now awash in doping accusations, the team has been compared to Armstrong’s United States Postal Service team because of its streak of international success and the depth of top riders on its rosters — but also because of the persistent doubts about the methods that may have fueled them.

“The finding that the 2011 delivery of testosterone gel was intended for the illegal enhancement of a rider’s performance is extremely disturbing,” the chief executive of British Cycling, Brian Facer, said in a statement. Facer said the organization would leave any “further action” related to the case in the hands of British antidoping officials, “whose work will have our wholehearted support.”

Freeman was a fixture around British cycling teams for years as the country and its riders rose to the pinnacle of the sport. He worked for British Cycling from 2010 to 2017, and was part of the concerted effort by the organization to invest in the sport before Britain hosted the 2012 London Olympics.

That investment paid off: British riders led the medal count in cycling in London, with 12 medals, including eight golds — double the overall number won by Germany, the team that ranked second on the cycling medals table. It repeated its success at the 2016 Rio Games, winning another dozen medals, including six golds.

In 2012, a year after Freeman was accused of receiving a shipment of testosterone, Team Sky won its first Tour de France, with Wiggins triumphantly riding down the Champs-Élysées in Paris as his teammates celebrated around him. That scene would become nearly an annual event: From 2012 until 2019, the British team won the Tour seven times in eight years. Froome finished atop the podium four times.

The success of British teams and British riders in major international competitions was credited with starting a cycling boom in England. But as is often the case in the sport, the team’s dominance also invited doubts about how its riders became so good, and so fast. In Team Sky’s case, speculation regarding the squad’s possible drug use was backed up with some evidence.

In this latest case, Freeman, who admitted to obtaining the testosterone and lying to British antidoping officials about it, initially said he had not ordered the drug and that the company had made a mistake in sending it to the team. Then he admitted ordering it, but claimed that he had been bullied into doing so by the British Cycling and Team Sky coach Shane Sutton, whom he said had demanded Freeman obtain the drug to treat his erectile dysfunction.

The tribunal called Freeman’s claim “an elaborate falsehood,” though the doctor continues to assert its veracity.

Sutton has vehemently denied Freeman’s claim. In a statement Friday to The Daily Mail, he said he was disappointed that Freeman had used him as a scapegoat.

“I’d like to stress that neither I nor Sir Dave Brailsford knew about the testosterone order,” Sutton said, referring to Brailsford, the longtime manager of Team Sky and the former performance director at British Cycling. “But I think it’s important to find out who the doctor ordered it for. Hopefully that will emerge from the investigation by UK Anti-Doping.”

UK Anti-Doping, which oversees antidoping in Britain, announced Friday that it has charged Freeman with possessing prohibited substances and tampering or attempting to tamper with doping controls. Freeman has been provisionally suspended pending an investigation, the agency said in a statement.

That investigation is expected to delve into Team Sky’s possible use of testosterone, which the tribunal called on Friday “a doping drug of choice.” The drug has been used in cycling for decades, in forms like injections, pills, creams and gels, to enhance recovery, and it has long been banned as a performance-enhancing substance.

Testosterone is so effective at helping riders bounce back from grueling efforts, though, that some still use it despite the risk of testing positive. Floyd Landis used it to help him win the 2006 Tour de France, but he subsequently tested positive for it and was stripped of the victory.

Testosterone is only one of the drugs Team Sky riders have been accused of using to enhance their performance. In 2016, Russian hackers broke into a World Anti-Doping Agency system that tracks the approved use of banned drugs by athletes, called therapeutic drug exemptions; the hack revealed that Wiggins and Froome had both used drugs, including corticosteroids, while racing for Team Sky.

A subsequent British parliamentary committee report suggested that Wiggins had used a powerful corticosteroid in the lead-up to his 2012 Tour victory not for medical reasons (he claimed it was for asthma), but to improve his power-to-weight ratio. A light yet strong rider would have an easier time racing up steep mountains than a heavier one. Wiggins denied he had used the drug to aid his performance, and he has spent years explaining away those and other doping accusations.

In 2016, UK Anti-Doping began an investigation into a package delivered to Team Sky, purportedly bound for Wiggins, in the weeks before Wiggins won that summer’s Tour de France. But the agency couldn’t prove the contents of that package, partly because Freeman had claimed that his laptop with the team’s medical records was stolen while he was on vacation.

UK Anti-Doping declined to discuss Friday’s finding against Freeman other than to note that it acknowledged the decision.

“We do not intend to make any further comment at this time,” the agency said in a statement.