Brodie Van Wagenen, the Mets’ new general manager, was majoring in communications at Stanford when he was invited out to dinner with his future wife, Molly Knight, and her family in the fall of 1993.

Van Wagenen was an outfielder on the baseball team, Knight was a diver, and her mother’s partner needed no introduction: She was soon to marry Neil Armstrong, the first person to walk on the moon.

The occasion turned out to be a two-hour meal. In all, Neil and Carol spoke for about eight minutes.

“Every quiet period, I filled it,” Van Wagenen said. “I had diarrhea of the mouth.”

When Molly and Brodie got in their car, he worried aloud that he had talked too much.

“That would have been very helpful to know before dinner,” Van Wagenen recently recalled saying as he stood by the Mets’ batting cage before a spring training game in Port St. Lucie, Fla. “I fill dead space, always have. Sometimes, maybe, to a fault.”

The Mets are learning that talks with Van Wagenen are forever ongoing. His first impressions with people across the organization have been indelible and largely audible. He has wasted little time becoming the voice of the team, taking over after the eight-year tenure of Sandy Alderson and immediately bringing in veteran players, new staff members and a win-now philosophy — and doing so while keeping up near-constant conversations inside and outside the organization. 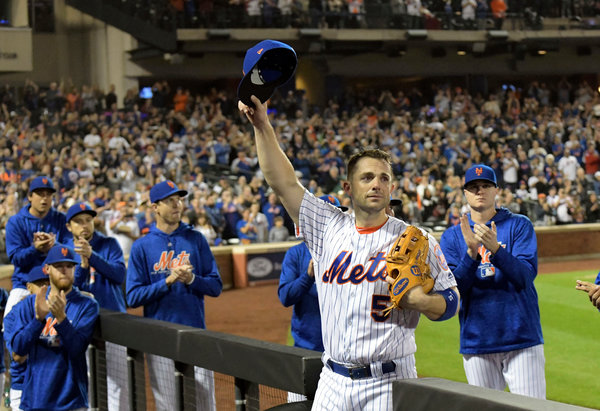 “I always err on the side of overcommunication in hopes that people will appreciate my transparency,” he said. “I have a hard time turning off my brain.”

Omnipresent in Prada sneakers with his hair gelled just so, the former agent patrolled his new fief with an energetic gait at the Mets’ spring training base. He jotted notes in a black pad and covered his mouth with it when he knew he was in the outfield camera’s frame sitting behind home plate. He pulled up stools in the clubhouse to speak with former clients, like outfielder Yoenis Cespedes, and offered fist bumps through chain-link fences.

“He brings a kind of swag, a confidence,” said outfielder Brandon Nimmo, who was a Van Wagenen client.

That attitude was welcomed after back-to-back losing seasons in Flushing. An all-hours operator, Van Wagenen promised to bolster a lineup in dire need of depth. He followed through with investments in analytics and veteran fielders, and commissioned studies of sleep patterns.

He put his own schedule to the test this week: About 48 hours before opening day, he signed Jacob deGrom, the reigning National League Cy Young Award winner and a former Van Wagenen client with Creative Artists Agency, to a five-year extension worth $137.5 million. In the final day of negotiations, Jeff Wilpon, one of the team’s owners, Van Wagenen, deGrom and his agents sat in a room in Sarasota, Fla., to complete the transaction. When deGrom got hungry after hours of listening to the general manager and the agents go back and forth, Van Wagenen made a run to 7-11 to buy mini tacos for deGrom. Van Wagenen viewed the extension as the last word of his first off-season.

“We haven’t been shy about who we want to be and how we plan to get to that place,” Van Wagenen said. “There are risks associated with saying what you want out loud because then you have to hold yourself accountable.”

Van Wagenen hasn’t been shy about maintaining dialogues with his former co-workers and their clients since taking the Mets job. He has courted fresh perspectives, including hiring the ESPN broadcaster Jessica Mendoza, another C.A.A. client, to help with player evaluations as she travels around the majors for television. The move drew attention, both good and bad, but he considered her to be another innovative addition to a collection of staff members he billed as “the best and the brightest.”

A more traditional member of his front office, David Wright, who became a special adviser to Van Wagenen after retiring last fall, quickly learned his boss was willing to discuss nearly anything.

“Some days, I’m like: ‘Hey Brodie, I’ve got to take my daughter to preschool. I’ve got to go. Can you wrap this up?’” Wright said. “I think he just loves talking the game.”

One of the first calls Van Wagenen made when the Mets hired him was to Pete Alonso, the team’s top prospect. They arranged to meet at Los Sombreros, a Mexican cantina in Scottsdale, Ariz., that Alonso chose. Alonso, then 23, was in Arizona for the Fall Stars Game and had yet to log an inning in the majors.

That was part of the reason for dinner. Despite hitting 36 home runs between Class AA Binghamton and Class AAA Las Vegas, Alonso did not get called up to Queens in September. The Mets were out of the playoff race, but the front office’s reluctance to call him up centered on the manipulation of Alonso’s major league service time so the Mets could control his future longer.

In Arizona, Alonso ate lamb adobo as he listened to Van Wagenen, who told him he wanted to “be a bridge between players and management.”

“Extending that branch was very meaningful,” said Alonso, who made the opening day roster after a stellar camp. “Huge, really.”

Shortly after bringing back reliever Jeurys Familia via free agency, Van Wagenen joined front office members and ownership on a trip to the Dominican Republic. Omar Minaya, the former Mets general manager who is now one of Van Wagenen’s assistants, arranged for the contingent, which included Robinson Cano, Familia and shortstop Amed Rosario, to visit an orphanage in addition to the team’s baseball academy.

“I never went to a place in the D.R. like that,” Familia said. “Not everybody would come to our country, meet our families, share a meal with us.”

His years of trying to win over amateurs who he believed could turn into major leaguers have informed his approach. Todd Frazier, the Mets’ third baseman, goes back with Van Wagenen the furthest. He recalled first meeting Van Wagenen in his parents’ living room in Toms River, N.J., when Frazier was a junior at Rutgers. Charlie and Joan Frazier had raised two professional baseball players by the time they took the measure of Van Wagenen as Todd’s potential agent. Van Wagenen ended up representing him for 12 seasons.

“Your agent becomes family if you’re with him that long,” Frazier said. “He is whip smart and always has been. He’s someone I respect and always will.”

As an advocate, Van Wagenen’s voice was always heard above the din. In 2018, when the free-agent market slowed nearly to a halt, Van Wagenen, who was an agent for 18 years, charged that owners were colluding to suppress player salaries.

DeGrom — one of eight Mets, including three of the five starting pitchers, on the roster whom Van Wagenen once represented — was in the middle of a historic season last year when Van Wagenen publicly suggested at the All-Star Game that the Mets should trade his client if they were not willing to extend him. Three months later, Van Wagenen informed deGrom that he no longer represented him. He was his boss.

“I’m hoping my understanding of the player mind-set will be an advantage when I’m communicating internally here,” Van Wagenen said.

After he crossed over to management, however, an extension for deGrom was one of the few topics on which Van Wagenen remained silent this spring, highlighting the delicacy of his pivot from his past profession. Tony Clark, the head of the players’ union, expressed concern regarding Van Wagenen’s switch. While the Mets billed Van Wagenen as an unconventional hire, the agent Scott Boras, his formal rival, noted ethical worries about the inside information Van Wagenen could bring to coming negotiations involving his former clients.

Van Wagenen, who is not a lawyer, divested his stake in C.A.A. When he visited Mets’ camp last week, Clark said discussions with the team had been held “to make sure everybody knew the parameters that everyone was going to function in moving forward.”

Van Wagenen is well versed in all aspects of the collective bargaining agreement. In 2013, along with Jay-Z, he helped negotiate a 10-year, $240 million contract for Cano with the Seattle Mariners. Five years later, Cano was suspended for 80 games after testing positive for furosemide, a diuretic he said was for a medical condition. It is also used as a masking agent, to disguise banned substances. Cano served the ban. A month after the World Series, Van Wagenen traded for him. Wilpon, the owner, said he was “very comfortable” with Van Wagenen’s explanation of Cano’s situation.

Though he has long been in the picture with the Mets, Van Wagenen is now in the family portraits, too. He noted that his three children and wife will now have one team to root for, a departure from the days when his older son, Rafe, operated like a fantasy owner, supporting his father’s clients rather than a team as a whole.

Van Wagenen’s family also knows the ins and outs of the profession. They live near Yankees General Manager Brian Cashman in Connecticut, and Rafe and Cashman’s son, Teddy, came up through the same schools. Van Wagenen taught his son the importance of keeping information confidential at a young age when Cano was a free agent in 2013.

“At certain times, I said, ‘Rafe, you can’t tell Teddy what’s going on in the Cano negotiations,’” Van Wagenen said.

His son responded: “Dad, I would never!”

Van Wagenen was proud of his son’s strategic reticence, but he recently realized that another form of communication may be a concern. His wife now tunes in to WFAN, the radio station to which Mets fans often call to vent about management’s decisions.

“She’s been listening,” he said, “for better or worse.”