Josh McGuire believes Brisbane can still give the NRL premiership a shake even if star back-rower Matt Gillett does not play again this season.

Gillett has been out since April with a fractured neck, with his injury problems compounded by a torn calf earlier this month.

The 29-year-old is at least two to three weeks away and remains optimistic about his chances, but coach Wayne Bennett said he had a hunch he wouldn't be back at all in 2018. 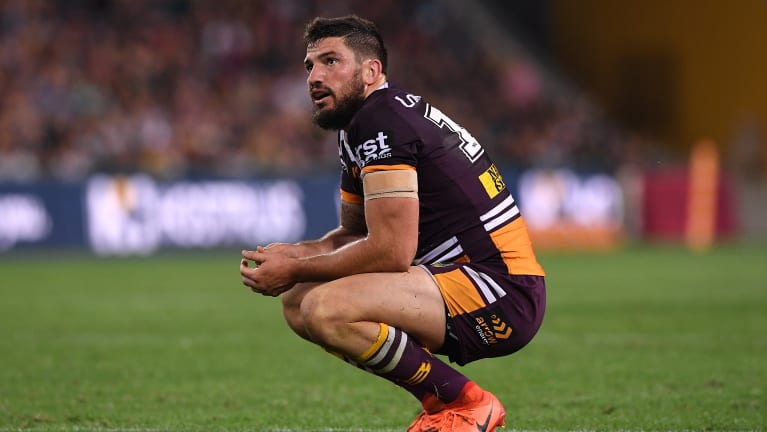 Matt Gillett has not played since April.

McGuire admitted it would be a huge setback for the Broncos' title aspirations if Bennett's prediction proves correct, but said it was in everyone's best interests that Gillett takes his time.

"Gillo's a good mate of mine and I don't want him to rush it," he said on Monday.

"He's been a great warrior of the game. I just want him to take all the time he needs for him and his family to get himself right and get his body right.

"It'd be a major blow for us to (not have) Matt Gillett, he's the best back- rower in the world.

"But the key is for us to make sure he's back when he's ready and when his body's ready."

The emergence of a young and talented new crop of forwards at Red Hill this season means there is less urgency about Gillett's fitness.

Their 50-18 annihilation of Penrith on Friday night suggests they are coping just fine without him, but a better read on Brisbane's form will emerge as they prepare to face three top-four contenders over the next five weeks – starting with Cronulla at Suncorp Stadium on Thursday night.

"Any team with Matt Gillett in it is better, but we've definitely got the stable here to really have a crack at the season," McGuire said.

"We're playing inconsistent footy at the moment, but it's a level of footy that's keeping us up there in the top echelon of teams.

"We've been up and down this season … we need to string a few games together."

Meanwhile, halfback Kodi Nikorima failed to complete Monday's marathon training session but is expected to be right to face the Sharks.

Broncos officials said Nikorima, who scored two tries in their rout of the Panthers last week, had groin tightness.