Anthony Seibold's move to the Brisbane Broncos is now official, with the current South Sydney coach confirmed by the Queensland club on a four-year deal. Now the 'if' has been taken care of, the intrigue surrounds the 'when'.

Brisbane's board rubber-stamped the decision on Tuesday with an announcement being posted by the club on Wednesday afternoon. Seibold's appointment was never in doubt and he has been slated to start in 2020, which would mean both he and inbound Rabbitohs coach Wayne Bennett would remain in place for the next NRL season. 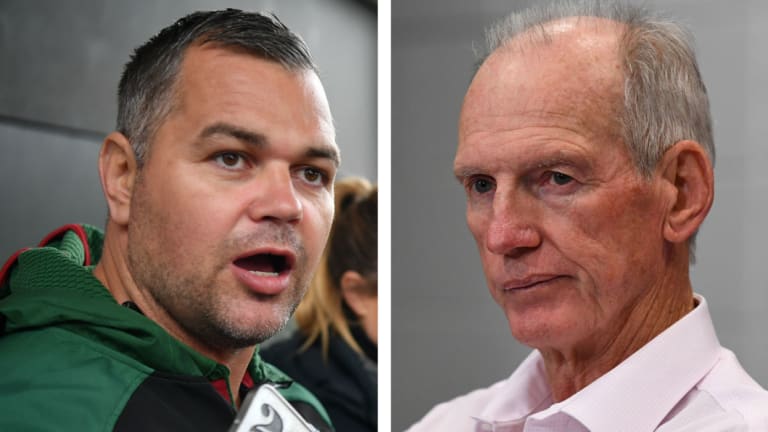 Crossing paths: Anthony Seibold and Wayne Bennett are trading places, but it remains to be seen if the placements can be expedited.Credit:AAP

Most believe that's unlikely to be the case, with negotiations continuing behind the scenes to see if the move can be hastened, although South Sydney would have to find some extra money or Brisbane would have to pay Bennett a lump sum if he was to depart early.

Outwardly, the Broncos are committed to seeing off Bennett after one more season, while the supercoach has indicated publicly time and again that he intends to be in charge at Red Hill for the coming season.

"He [Seibold] will begin a four-year contract in 2020, with current coach Wayne Bennett committed to seeing out his final year as Broncos coach in 2019 – as announced by the club last month – and the club is looking forward to celebrating Wayne's last season at the Broncos," Brisbane said in its statement.

Seibold was viewed by many as the frontrunner despite his limited experience as a head coach in the NRL. He beat out Kevin Walters, among others, to earn himself a crack at one of the more coveted coaching jobs in the code.

Broncos chairman Karl Morris said the 44-year-old Seibold, who once played for Brisbane as a reserve-grader, was a "stand-out" candidate.

"We have been through a robust process and interviewed a number of high-calibre coaches," Morris said.

"Anthony was a stand-out. His football knowledge is exceptional, as is his thinking and process around people management.

"He also has a strong commitment that will add to the commercial and community aspects of our club, which is extremely important to the Brisbane Broncos."

Broncos chief executive Paul White said the club ensured it canvassed all quality recruits and were confident they had found the best person to move the club on from the Bennett era.

"We have done a thorough due diligence and as a result we have got the best person for the job in Anthony," White said.

"Our job is to look after the long-term future of this club and that is what we have done through Anthony's appointment.

"Anthony is one of the best young coaches in the game and having him for 2020 is a huge win for our members, players, staff, sponsors and fans.

"Planning is well and truly underway for next season and we are expecting big things from the team – it's a season we can all look forward to."

The Broncos have taken heavy fire from former players for failing to give Walters a chance to guide his old club but Brisbane administrators have privately bristled at the notion that they didn't give every candidate equal opportunities to impress Morris and fellow board member Darren Lockyer, who was at the vanguard of the recruitment drive.

It seems as if the stage is finally set after a frantic week of coaching movement but there looks to be one chapter yet to unfold as Bennett and Seibold work out their plans for next year.