The top-to-bottom review about to engulf the Broncos will have one more item to investigate after it emerged that as many as eight players were out late playing poker machines at a Sydney pub the night before they were obliterated 58-0 in a record-breaking defeat at the hands of Parramatta. 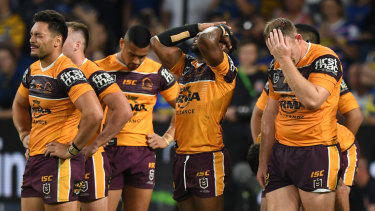 Broncos players react after conceding a try against the Eels at Bankwest Stadium in Sydney on Sunday.Credit:AAP

The club was notified on Tuesday and it was unclear whether the players had informed coach Anthony Seibold that they have ventured out of the team hotel. All were said to be back by midnight and there was no indication any were drinking alcohol.

But given the magnitude of the defeat and the seismic fall-out at Red Hill, the optics are poor and the timing even worse. The club's fans are fuming at a performance most believe was the worst in the history of the glamour club, and the news only adds to the perception that a degree of professionalism has gone missing during a difficult 2019 campaign.

Already, Seibold has been critical of senior players in the aftermath of the hiding, suggesting in his press conference that the youth brigade had at least tried until the final siren. But he would likely be dismayed to see teenage stars Haas and Fifita among those following the crowd instead of resting up for one of the biggest games of their career.

Everyone from the board down will be under pressure to explain their worth going forward at Red Hill over coming seasons as part of a forensic examimation of what went so badly wrong at Bankwest Stadium.

Almost every club great has had their say on the state of affairs in Brisbane, with many urging current captain Darius Boyd to step down or retire, while Milford and McCullough have been the target of further criticism on the back of their performances in 2019.

Seibold will be safe, given he's just finished the first year of a five-year deal, but what the football department and the starting 13 looks like for game one of next season remains to be seen.

The club was scheduled to release a statement on Tuesday afternoon.