Wayne Bennett let a teenage monster half the age of Paul Gallen off the leash as a rejuvenated Broncos spoiled Greg Inglis' 250th game and snapped a Sam Burgess-less Rabbitohs' winning run at ANZ Stadium on Thursday night.

Eighteen-year-old wrecking ball Payne Haas, standing at 194cm and tipping the scales at 120kg, lived up to the hype with a superb second-half cameo as Brisbane lost Josh McGuire and Matt Lodge to injury and then mowed down a tiring South Sydney. 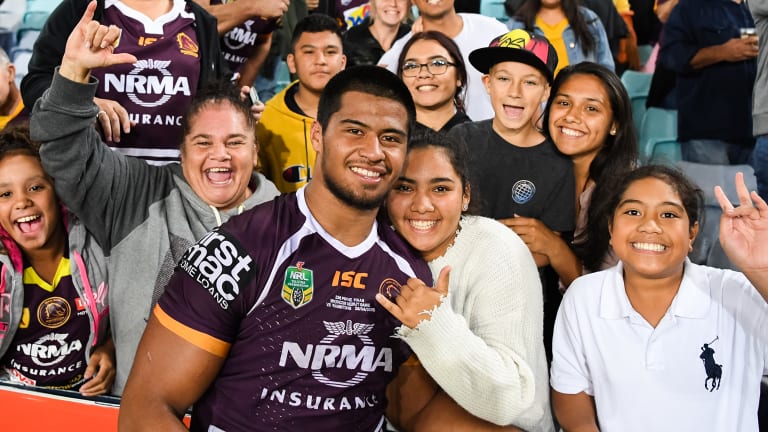 On any other night the loss of State of Origin shoo-in McGuire (ankle and Achilles) and Lodge would have been a bitter pill to swallow, but McGuire's exit preceded Haas' introduction minutes later as he barrelled his way for 78 metres and made 18 tackles in an powerhouse 21-minute NRL bow.

And it's no wonder Bennett hasn't been fretting over his side being accused of having a lack of grunt up front when he knew what he had laying in wait.

So impressive was the Brisbane behemoth, Phil Gould labelled it as a "birth of a superstar" in television commentary. It's pretty hard to argue, even from the limited evidence at hand.

"He wasn’t bad for a first time," Bennett said. "You’ve got to get your kids ready at some stage and you’ve got to start the process.

"Obviously Payne’s going to be an NRL player for a long time and it’s about giving him a game and managing that as well as I can. I don’t want him to get ahead of himself."

Three times the Rabbitohs shook off the Broncos to take the lead at various stages, but when Corey Oates capped an impressive night with a brilliant solo try mid-way through the second half Brisbane didn't let the lead slip.

John Sutton's late try set up a nervy final five minutes, but the Rabbitohs were left to rue a flat period after the break and Burgess' second suspension in a month.

"Our attention to detail wasn’t quite what it should be," said Rabbitohs coach Anthony Seibold, who confessed he feared Richie Kennar's season might be cut short with a long-term foot injury.

"We talk about building pressure and effort … and we didn’t see that tonight, particularly in the second half.

"We’ve felt that we’ve improved [over the first eight weeks]. We’ve showed signs of our potential and the last five weeks I’ve been relatively happy. We’ve been building steadily, be we took a step back tonight."

NSW No.9 hopeful Damien Cook answered Cameron McInnes' Anzac Day feats with another impressive display – albeit clouded with a couple of errors – as Jack Bird showed no immediate signs of breaking out of an early season funk.

The Broncos might have been messing with a few minds when they named Bird in the No.7 and Anthony Milford in the No.6, but the only mind they need to sort out is their marquee recruit.

Brisbane's response was swift, but moreso scintillating. Just like his ex-accomplice Ben Hunt did on Anzac Day, Milford dared to run on the last play and after a mesmerising exchange of passes featuring Oates the rangy winger toed ahead for Darius Boyd to score.

But the other half of the most potent State of Origin edge played a major hand in restoring Souths' buffer, Inglis shovelling the ball out the back on a set play for ANZ Stadium specialist Alex Johnston to race over.

The man Bird has replaced in the starting side, Kodi Nikorima, looked Brisbane's most potent once sent into the fray and didn't need long in the second half to make up for what he thought might have been an injustice in the first.

Having been adjudged to have not grounded the ball under a desperate Johnston tackle before the break, Nikorima split Walker and Sutton to bring the visitors level within the first eight minutes of the second stanza.

Reynolds potted a penalty to send the Rabbitohs to the lead for a third time, but it lasted a matter of minutes as Oates brushed past several feeble attempts to swing the momentum firmly in favour of Bennett's men.

Milford astutely kicked for James Roberts to pad the lead before Sutton's late salvo, but cruelly Inglis threw an intercept to Sam Thaiday to snuff out the Rabbitohs' revival in his milestone match.

On Bird, Bennett said: "I thought it was his best game for us. It still wasn’t to where we want him. He can play a lot better than that.

"When you’re out of form and struggling you’ve got to start somewhere and he did that tonight. I thought [after he dropped first ball] ‘we’ll see what he’s made of now’, but he handled himself well after that."