Brisbane won't risk star forward Joe Ofahengaue on the eve of the NRL finals after he was ruled out of Saturday's clash with Canterbury with a calf injury.

Ofahengaue missed last week's win over Parramatta and had been named on an extended bench for the Bulldogs match, but won't run out at ANZ Stadium on Saturday night. 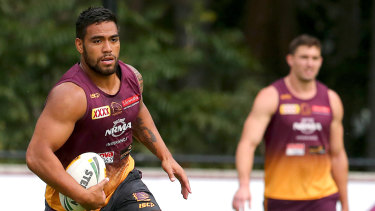 The Broncos are all but assured a finals spot, with the only way they could miss being if they lose to Canterbury and Cronulla and Wests Tigers play out a draw.

They are then hopeful the Queensland forward will be fit to play next weekend, where they will meet either Parramatta or Manly if they advance.

"Joe did some rehab running but he has not been back into full training yet," coach Anthony Seibold said on Friday.

"We have made an early decision there on him and Rhys Kennedy will keep his spot on the bench.

"The medical staff tell me he should be able to train by Tuesday, so that gives us another three or four days (for his recovery)."

It means Brisbane will stick with Patrick Carrigan at lock, while Matt Lodge and Payne Hass will continue to start in the front row.