FARMINGDALE, N.Y. — With powerful, audacious swipes at the golf ball and deft putting, Brooks Koepka did not flinch Friday as he continued a dauntless assault on the intimidating Bethpage State Park Black Course at the P.G.A. Championship.

With a five-under-par 65 in the second round, Koepka extended his first-round lead, and coupled with a 63 on Thursday, his score set a record for the lowest 36-hole total in a major golf championship. He will take a seven-shot lead into Saturday’s round.

As Koepka was finishing on Friday evening by sinking the last of seven birdie putts, Tiger Woods, his playing partner, stood off to the side with a grim expression and his head tilted toward the clouds swirling above the green.

The euphoria of Woods’s inspirational victory at the Masters a month ago was hardly forgotten. But the magic of that moment did not accompany Woods to his next event. Battling an erratic driver — he hit only three of 14 fairways — Woods shot 73 on Friday and missed the cut with a final tournament score of five over.

“I’ve enjoyed being the Masters champions again, and it was a short turnaround for the P.G.A.,” Woods said after his round. “I didn’t do all the little things I needed to do to post good scores.”

It was the ninth time Woods, 43, had missed the cut in the 76 majors he has entered as a professional.

Koepka continued to dominate the lengthy Black Course with towering, accurate drives as he pursued his fourth title in the last nine majors. .

“Brooksy is hitting it 330 yards off the tee and hitting 9-irons to the greens when most of us are hitting 4-irons,” Woods said of Koepka. “If he keeps doing what he’s doing, there’s no reason he can’t build on this lead.”

On the few occasions when Koepka missed the fairway off the tee, he seemed to have good fortune.

But Koepka’s game is more than strength off the tee. He hit 15 of 18 greens in regulation on Friday and has needed only 55 putts in his first two rounds.

“I’m really comfortable with the way I’m stroking the putter right now,” Koepka said Friday. “I feel good especially the way I battled today. I didn’t feel like I had my best game today, but I’m very proud of myself. I feel great and just need to continue what I’m doing.”

Extra work in the hours after his competitive rounds appears to be a customary part of Koepka’s regimen. At 7:30 Friday night, Koepka spent several minutes hitting his driver on the tournament practice range. He also frequently practices putting in the basement, whether at his own house or his rentals on the road. 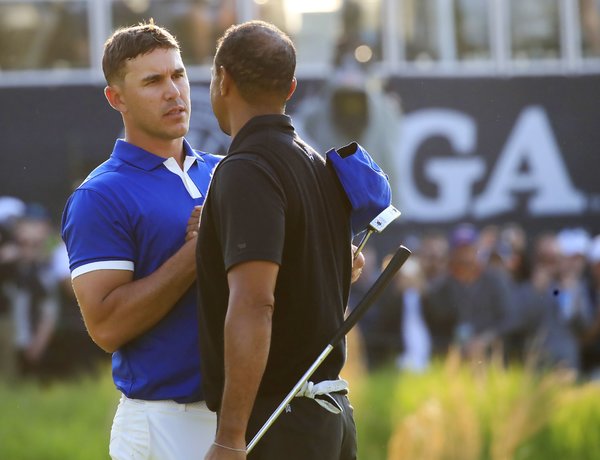 Woods says he believes Koepka, 29, may just be reaching his prime.

“He paid his dues when he was younger,” Woods said. “And everyone peaks differently. He’s found what he needs to do for himself. He’s got many more years ahead of him where he can do this.”

Despite Koepka’s huge lead, the rest of the field is far from conceding the outcome after only two rounds. Some of golf’s most prominent former major champions made stirring runs up the leaderboard on Friday.

That included the three-time major champion Jordan Spieth, who shot 66 on Friday and was tied for second with the 2013 Masters champion, Adam Scott, at five under. Dustin Johnson, who won the 2016 United States Open and is the world No. 1, shot 67 Friday and is four under for the tournament.

Scott, who finished third at last year’s P.G.A., had a sparkling round of 64 on Friday. For this event, and for the fifth time this year, Scott changed putters.

“It’s been the theme of the year for me,” Scott said. “But it’s been working.”

Scott, who has three top-10 finishes this season on the PGA Tour but no victories, shot 31 on the front nine by keeping all but one of his tee shots in the fairway. On the back nine, though, Scott seemed to lose control of his driver, although he still made three birdies and only one bogey.

Teeing off on Friday morning, Spieth and Johnson played in the same group and served notice that they did not intend to let Koepka run away from the field. Spieth was reasonably consistent off the tee, and although he hit only 50 percent of the greens in regulation, his putting and short game repeatedly saved him.

Spieth got up and down from four greenside bunkers and in one stretch needed only one putt on six successive greens. He finished with just 23 putts over all and sank several long birdie putts, including a 39-footer on the picturesque par-3 eighth hole, where hundreds of fans sit on hills adjacent to the green to take in the action.

“The crowd at the eighth hole was yelling out that no one had gotten the ball to the hole from the side of the green where I was putting from,” Spieth said afterward. “They kept hollering that everyone has left it short.”

Spieth listened and adjusted. He has also altered his setup as he stands over putts.

“That has made a big difference; it seems like an easy thing, but when that gets off, golf is pretty difficult,” Spieth said. “And that’s where I’ve been the last year and a half.”

Johnson dominated the course with his driving length — he averaged 313 yards off the tee — and the subsequent shorter approach shots put less pressure on his putting.

Johnson is a good friend of Koepka’s, and the two frequently practice and work out together.

“We’re very competitive; we kind of push each other,” Johnson said.

Asked if he was hoping to be paired with Koepka in Sunday’s final round, Johnson smiled and answered: “I hope we are. It would be a lot of fun.”