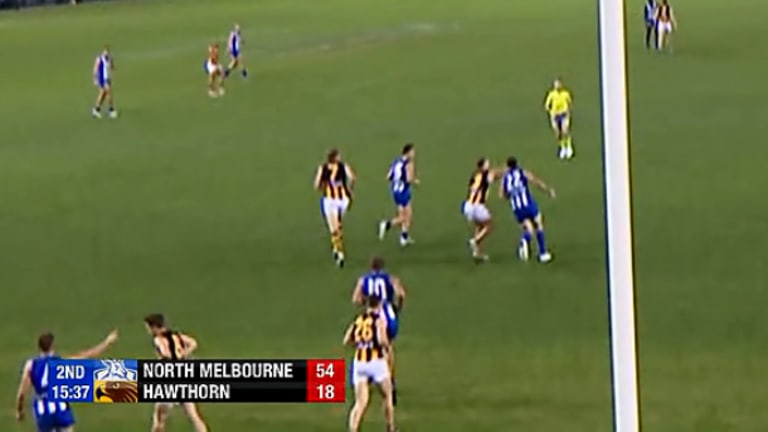 Hawks youngster Ryan Burton is also likely to be looked at by match review officer Michael Christian after a third quarter collision with North’s Shaun Higgins which knocked out the North prime mover.

Mitchell’s indiscretion resulted in a downfield free kick to Roo Shaun Atley, who duly kicked a goal from directly in front. Geelong premiership captain Cameron Ling said on 3AW that "there could be a week in it". Working in Mitchell's favour was that Goldstein did not look to be injured and played the game out.

Mitchell, who was well held on Sunday by North tagger Ben Jacobs, had been the $4.50 second favourite for the Brownlow at Sportsbet, behind only Richmond superstar Dustin Martin.

“I haven’t even seen it, so I don’t know. I can’t comment on something that I haven’t seen,” Clarkson said after the 28-point defeat.

“I knew it was a free kick, but I didn’t know where the hell it had come from. [I] can’t comment on it until I actually see it.”

Clarkson suggested however that Burton was likely to avoid punishment.

“I think [Higgins] was out of it before he hit the deck,” Clarkson said.

“Usually for mine, that’s a clash of heads. When it’s two noggins hitting each other, ‘Burto’ was bloody lucky that he wasn’t knocked out as well. It was probably because Shaun was blindsided so he just had no idea that contact was coming.” 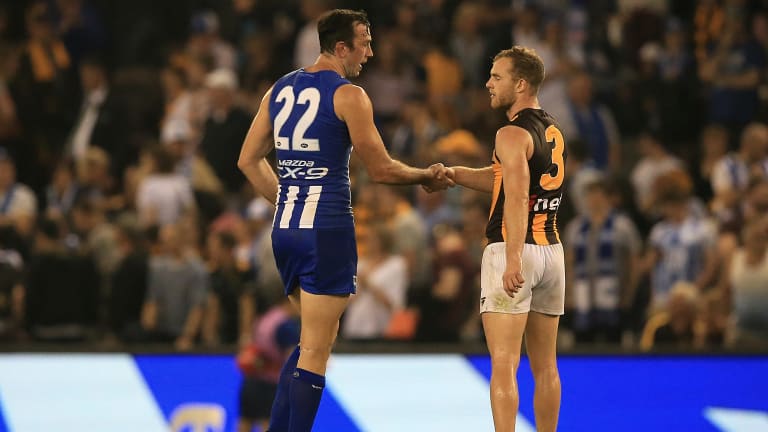 Clarkson then used the Higgins example to mount an argument that tacklers should be rewarded more than they are at present.

The Hawks, who went into the game without injured small forwards Cyril Rioli and Paul Puopolo, trailed by 57 points at half time.

Hawthorn charged back into the game after the long break and remained in the hunt midway through the final quarter, but Clarkson acknowledged his side had been smashed early in the match.

“We played against a pretty good opposition [who] I think the footy world might give a bit more credit to. Maybe we should as a footy club too. They showed us a clean pair of heels in so many facets of the game in the first half it wasn’t funny,” Clarkson said.

“By and large they just hunted the contest much better than us.

“They were just hungrier for the contest.

“We’re disappointed that we didn’t give a better account of ourselves in the first half.

“All the KPIs that we take, we had two green ones out of 18 in the first half.

“At least we fought the game out and gave ourselves a chance.”

Clarkson was optimistic Liam Shiels (back) would be available to take on St Kilda in Launceston next Saturday night despite being hurt on Sunday, while veteran Shaun Burgoyne is poised to return from a hamstring injury.