MINNEAPOLIS — Sometime during the Final Four on Saturday, the television cameras will focus on Auburn Coach Bruce Pearl. They are likely to find him in his usual animated state: limping up and down the sideline, screaming, arms flailing, his face the color of a bowl of borscht, his once-pressed suit reduced to a rumpled outfit paying homage to the land of a thousand (perspiration) lakes.

“He might as well be out there on the floor with us with a jersey on, honestly, the way he’ll be sweating,” Auburn forward Malik Dunbar said with a laugh. “He wants to win so badly.”

Pearl’s problem, at least at several previous stops in a nearly four-decade coaching career, is that he wants to win so badly he does not always play by the rules. Yes, he has led Auburn (30-9) to its first Final Four, and to a date with Virginia (33-3) in Saturday’s first national semifinal. But before that, Pearl committed a recruiting violation at Wisconsin-Milwaukee, was fired for a similar one at Tennessee, got blackballed by the N.C.A.A. and then saw two assistants leave his staff at Auburn under the cloud of F.B.I. investigations.

But lost in his scofflaw history and his sideline histrionics is this: Bruce Pearl can coach.

Pearl, 59, relishes his role as an outsider. He was a student manager at Boston College, he is the third Jew to take a team to the Final Four and he spent a decade in Division II when nobody would hire him for trying to get a rival program in trouble with the N.C.A.A. Yet he has arrived in Minneapolis at the top of his game, on his terms. 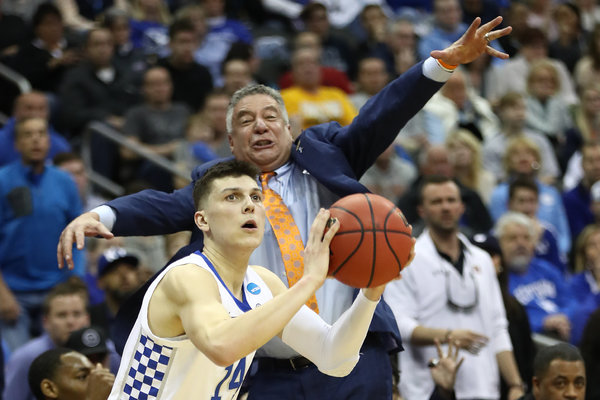 That is, as an underdog.

At Auburn, basketball has largely been an afterthought — a diversion between football and spring football — but the Tigers, seeded fifth in the Midwest Region, arrived at their first Final Four by taking down three of the game’s blue bloods: Kansas, North Carolina and Kentucky. Next up is Virginia, the only remaining No. 1 seed.

“He has a great way of motivating people,” Auburn center Austin Wiley said of Pearl. “If he has ammo to use, he’s definitely going to use it, and we’re going to run through a brick wall.”

Pearl has changed little since he left the knee of Tom Davis, whom he had followed from Boston College to Stanford to Iowa as an assistant. He still espouses Davis’s tenets — pressure defense and playing fast — and a commitment to firing away from the 3-point line.

Pearl rode that organized chaos to the Division II championship at Southern Indiana in 1995, and it lends itself to playing in the N.C.A.A. tournament as an underdog, which is where Pearl’s teams have often excelled. He is 7-6 in the tournament as a lower-seeded team, having taken 12th-seeded Wisconsin-Milwaukee to the round of 16 in 2005, sixth-seeded Tennessee to a regional final in 2010 and, now, fifth-seeded Auburn to the Final Four.

It is hardly a surprise for some of his former players to see Auburn’s guards, Jared Harper and Bryce Brown, who were largely written off as too small or too frail by other programs, play like five-star talents for Pearl.

“Right away, when you put that uniform, he instills that confidence in you,” said Marc Hostetter, the point guard on Pearl’s championship team at Southern Indiana and now a middle school principal in Mount Vernon, Ind. “We all thought we were Division I players and it was somebody else’s fault that we weren’t there. I can’t overstate the fact that everybody plays as hard as they’ve ever played for him.”

That championship came after his Screaming Eagles fell behind the University of California, Riverside by 22 points early in the final and by 18 at halftime before storming back.

Stan Gouard, the star of that team, said Pearl did not yell at him. He would just tell Gouard that he was being outplayed. Or he would just make a face — one of many now familiar to Auburn players.

“They’re funny gestures,” said Gouard, now coaching at the University of Indianapolis. “Those faces are, ‘You’re not doing your job, you need to do better.’ Sometimes, the face says a lot of words.”

When Pearl finally returned to Division I at Wisconsin-Milwaukee, he once watched his team going through the motions in a game at lowly Cleveland State, lulled to sleep by a comfortable lead and a crowd of about 1,000 fans. Pearl called timeout.

“He sat us down, told a dry-sense-of-humor dad joke and after the punch line, just stood up and walked to the water cooler at the end of the bench,” said Adrian Tigart, who played on Pearl’s round of 16 team at Wisconsin-Milwaukee. “We all just looked at each other kind of confused, then laughed. He is so in tune with his guys and knows what levers to pull and when.”

When Tigert saw Pearl — who used to wear an orange blazer at Tennessee when the Vols played in-state rivals and who once turned up shirtless and painted orange for a Lady Vols basketball game — celebrating with Auburn fans on his way off the court after the win against Kentucky, he knew it was not for show.

“The double hand wave, like a politician?” Tigert said. “He used to do that on a Tuesday night when we’d go down to U.I.C. and there would be 30 people who had brought a fan bus down to Chicago.”

If some of it seems engineered, Pearl will not argue.

He is always looking, always evaluating, always gauging for how to make a connection. And he will rely on it again on Saturday, when he has told his players to act as if they have been here before, even thought they have not.

“I never felt like I had all the answers, but I want to give my guys confidence,” Pearl said. “I tell my players, ‘Like sometimes you have to overcome a bad call or a teammate taking a bad shot, you’ve got to overcome me.’ But I can say, look over a period of time and I’ve won a national championship and I’ve won. So they need to draw a certain level of confidence from me that we’ve been there and that what we do works.”

So when Pearl is a disheveled mess on Saturday, hobbling, screaming, making faces and drenched in a puddle of sweat, he is merely staying in character — and hoping his team does the same.