Brumbies bunker down at England's $35 million soccer World Cup base

The ACT Brumbies have bunkered down at England's former soccer World Cup training base in Rustenburg as they search for confidence before a clash against the Pretoria Bulls.

The Brumbies have moved into the hotel and training venue once described as a "high altitude training camp fit for a king" at the Bafokeng Sports Campus, which cost $35 million to build for the FIFA World Cup in 2010. 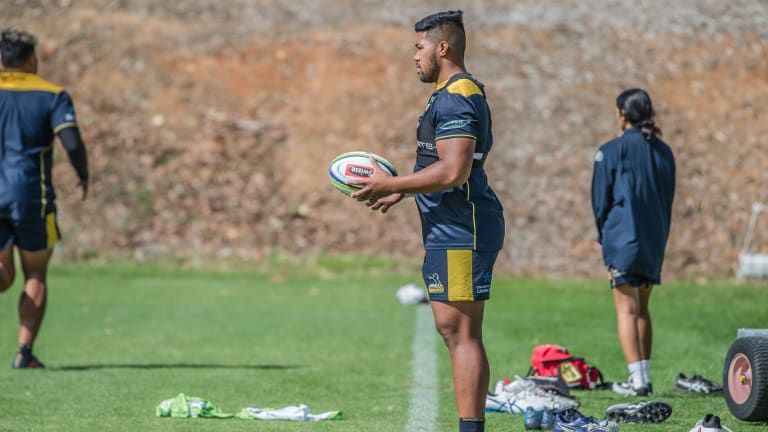 Folau Faingaa has emerged as a Wallabies hooker candidate.

It could be the perfect place for coach Dan McKellar to attempt to rally his players in a bid to snap a five-game losing streak when they arrive at the intimidating Loftus Versfeld on Saturday night.

The Brumbies will make at least three changes to their side this week, with hooker Connal McInerney to be added to the bench and McKellar tossing up combinations to replace suspended lock Rory Arnold.

Blake Enever is poised to be injected into the starting XV in a perfectly-timed boost to his hopes of earning a Wallabies call up for the three-Test series against Ireland in June.

Lachlan McCaffrey and Tom Cusack are battling to fill the void left by injured back-rower Rob Valetini as McKellar still searches for a winning formula.

The chance to earn a Wallabies spot will add extra incentive for the Brumbies, with Test coach Michael Cheika to unveil his squad next week.

It makes the clash against the Bulls the last chance to impress, with only a handful of Brumbies locked in and several players pushing their case from the fringes.

Hooker Folau Faingaa has been one of the Brumbies' standout performers this year after making his debut earlier this year and the powerful rake has been on Cheika's radar.

Injured hooker Josh Mann-Rea backed the rookie to thrive he if was thrown into Wallabies gold to play against the world No. 2 Ireland next month.

"I've been really impressed with him," Mann-Rea said of Faingaa.

"He's got a great work ethic, it's been good working with him and he's eager to learn. It's been such a big ask to do what he's done this year.

"He's got a few little things to work on, but this is his first season. He's going to develop into a bloody good player.

"He's only new into his professional career, but so are all the hookers in [Wallabies] contention. I think [Faingaa] would definitely hold his own. He's got a good shot at it."

The Brumbies have won just three of their 11 games this season and are stuck near the bottom of the overall ladder and second last in the Australian conference.

A loss against the Johannesburg Lions was the final straw for their faint finals hopes and the focus for the rest of the season will be restoring pride and building confidence for next year.

Faingaa has been thrust into a massive work load in his rookie campaign after Mann-Rea suffered a season-ending injury when his hamstring snapped off the bone in March.

The 37-year-old has returned to training but is on limited duties. He has set his sights on increasing his training next month and is hopeful of playing for the Canberra Vikings in the National Rugby Championships.

"You can't push [hamstring injuries] too hard in the first part because the attachments can stretch," Mann-Rea said.

"That's probably the frustrating bit because it feels good. But it's feeling good now so hopefully I'm moving forward. You just want to get out there and help the boys."