The ACT Brumbies celebrated their Polynesian players and honoured the club's links to island cultures by hosting a Pasifika Day on Sunday.

Almost 50 per cent of the Brumbies roster have islander heritage and the entire squad gathered to learn more about their teammates' culture. 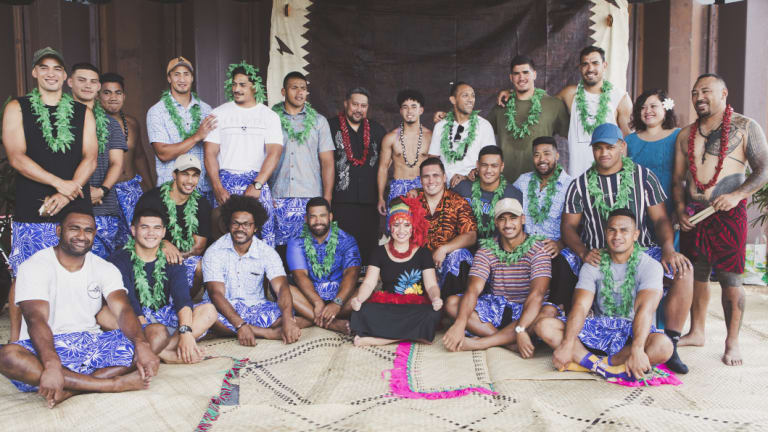 Brumbies skipper Christian Lealiifano said it was a special day for the club and emphasised the bonds formed off the field will have an effect on it this season.

"It’s really special for the club to acknowledge the Pacific Islands heritage that is in the club and for me being Samoan it’s truly humbling. It's a celebration of all our different cultures coming together," Lealiifano said.

"Pacific Island cultures are big on family and connections and I know [Brumbies coach] Dan [McKellar] has acknowledged that sometimes the missing piece to our puzzle is our connections.

"To be able to know and understand more about the guy you’re running next to is a really powerful tool and one I'm sure we'll be able to call upon this season."

Lealiifano praised his older brother Eddie for bringing the Pasifika Day idea to the club and McKellar for embracing it.

Eddie has run Pacific Islander workshops with other Super Rugby teams but said the buy-in from the Brumbies was the best he'd seen.

"It's about pushing them to break those glass ceilings and those limitations and the stereotypes put on us and reminding them they come from a long line of greatness," Eddie said.

"They’re not just rugby players and defined by being rugby players, it’s about empowering them and showing them there's more to them than passing a footy."

Lealiifano was rested for the Brumbies trial against the Melbourne Rebels on Saturday night but said he liked what he saw in their first game of the year.

"I was really impressed with our first hit-out, to see a lot of the young guys out there and guys put on the Brumbies jersey for the first time was special," Lealiifano said.

Jordan Jackson-Hope at fullback playing out of position, Mack Hansen, Tommy Ross, all local Canberra boys that did an outstanding job and didn't look out of place at all.

"It was nice to see Tevita [Kuridrani] back from injury and get a triple which wasn't surprising, he's world class and in really good nick.

"Melbourne had all their stars out so they're definitely going to be a tough team to play in round one, but we've got our superstars to come back well with [David] Pocock, [Henry] Speight, [Scott] Sio and our front.

"It will be great to have those guys back and nice and refreshed."