Brumbies players back decision to put Super Rugby before Wallabies

ACT Brumbies skipper Sam Carter says the squad is united behind the club's decision to pick the best available players, adamant a tug of war over a trio of stars hasn't been a distraction from their Super Rugby goal.

Wallabies great Mark Ella has also come out in support of the Brumbies, who slammed Rugby Australia for an "appalling lack of preparation and communication" and warning a lack of respect for Super Rugby could kill the competition. 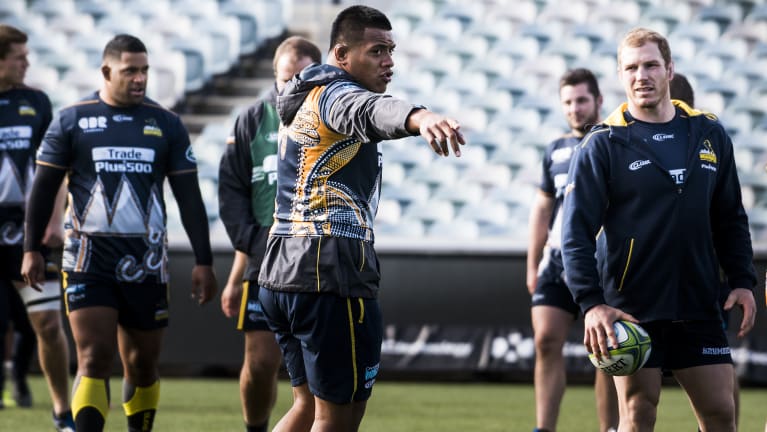 The Brumbies completed their final training session on Saturday, with David Pocock, Scott Sio and Allan Alaalatoa all set to play against the Japan Sunwolves on Sunday despite a Wallabies request to rest them.

Brumbies coach Dan McKellar will consider monitoring their game-time work loads if the team is in a position of power in the match after last-minute conversations with Wallabies staff the day before the game.

It's understood the Brumbies and Rugby Australia are still at an impasse after phone exchanges between the organisations resulted in both standing their grounds on the trio's availability.

"Dan put it to bed that the guys were playing and that was the last I thought about it," Carter said.

"They're playing, they're named [in the team] and they're ready to go so we're excited for [Sunday].

"It's good to have [Pocock, Alaalatoa and Sio] in the team because they're world class players and I know they'll do their best [against the Sunwolves]."

The Brumbies found an unlikely ally in Ella, who used his column in The Australian to call for national unions of Australia, New Zealand and South Africa to invest in Super Rugby.

Ella said he believed the Wallabies must remain the most important element of Australian rugby.

"But Super Rugby also has to be shown some respect or it may not survive," Ella wrote.

"… Allowing national unions to pull players out of Super Rugby for training camps and reconditioning programs damages the credibility of the competition.

"At a time when Super Rugby is struggling for relevance, particularly in Australia, it does not make any sense for SANZAAR to allow national unions to devalue the competition."

The Brumbies are trying to combat record low crowds this year by launching a '15 for 15' campaign in the hope it will convince 15,000 fans to attend the clash against the Sunwolves.

Wallabies coach Michael Cheika made the request to rest three Brumbies because of his concern about a six-day turnaround before the first Test against Ireland in Brisbane next weekend.

But it also put first-year coach McKellar in an awkward position as he tries to help his young team find confidence and winning form, which would have been doubly as hard without experienced leaders.

Pocock hopes he has put behind him the injury woes that have plagued his comeback season and says the Brumbies' Test contingent will be ready to "rip in" when they join Wallabies camp on Sunday night.

Pocock's return to Australian rugby was delayed by a knee injury at the start of the year and his comeback lasted just four games before damaging his calf.

"It's been really frustrating. To get back and to feel like I was fit and getting back into things a bit, to then have a niggling calf injury … you'd think I'd be used to injuries but it's been frustrating," Pocock said.

"One of the exciting things about our squad is we've got some really experienced guys and then some really, really young guys. You want to pass on knowledge and work together," Pocock said.

"One of my favourite things in South Africa was seeing some of those young guys really step up. It's always tough with new coaches and a new style of play. As much as you'd like to just crack on, it always takes time.

"It's probably taken a bit longer than we'd hoped for it to gel. One thing this group doesn't lack is the desire to work hard.

Sunday: ACT Brumbies v Japan Sunwolves at Canberra Stadium, 4.05pm. Tickets available from Ticketek. Fans will be allowed on to the field after the game.

* The Brumbies will donate $15,000 to charities if they reach their crowd target of 15,000. The money will be divided evenly between Lifeline Canberra, OzHarvest and Give me five for kids.