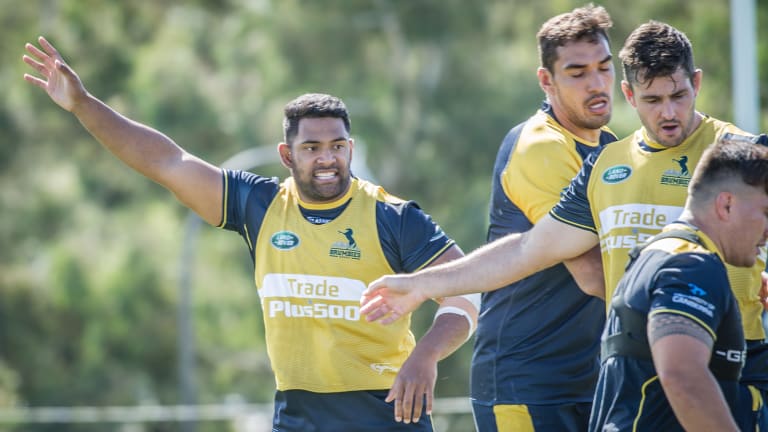 Scott Sio is hopeful of returning to play this weekend.

The ACT Brumbies will give prop Scott Sio as much time as possible to overcome any lingering symptoms from his first concussion in almost a decade in the hope he will play this weekend.

Sio will be on a modified return to play training program in South Africa after being knocked out by a high shot in the clash against Melbourne last week.

It was the first time Sio had suffered a head knock since 2009 when the Wallabies prop tried to tackle future NRL star Tyson Frizell in a schoolboys match in Sydney.

It is hoped the length of time between concussions will give Sio the best chance of playing against the Johannesburg Lions at Ellis Park on Sunday morning Australian time.

But jetlag could be a factor and he must complete the six-day stage-by-stage comeback process to be ready to help the Brumbies end a four-game losing run.

"I guess I'm on the lessor end of it and I trust the medical staff to make all the right calls, so we'll follow all the protocols," Sio said.

"It's something that's new for me … it was actually Tyson Frizell the last time it happened, I put my head in the wrong way and his knee collected my chin and I was out for a while.

"These things happen in the game. By Thursday or Friday we'll have a better picture and they said if I don't play this week, I'm a good chance to play next week."

The Brumbies will spend the next two games on the road, with clashes against the dangerous Lions and the Pretoria Bulls.

It will be a chance for the Brumbies to restore some pride in their season after struggling in the past month, losing games against the Otago Highlanders, Argentina Jaguares, Canterbury Crusaders and Melbourne Rebels.

The Australian conference race is still alive, but the Brumbies say their only focus is to start winning games again.

Coach Dan McKellar flagged potential changes for the game against the Lions after the team failed to fire in the second half against the Rebels.

David Pocock is set to be added to the starting XV, while Isi Naisarani will also be available for selection after an ankle injury forced him to miss last week.

A fit Sio would be a huge boost for the front-row battle and the 26-year-old said the Brumbies were keen to use their time on the road to make major improvements.

"We're disappointed, we've had a string of losses and they've all been games which we could have won, which is the hard thing to take in," Sio said.

"We've got to review it as honestly we can and highlight the areas we need to move forward. There are a lot of positives but also some big areas of improvement.

"It doesn't get any tougher than the Lions in Johannesburg and the Bulls in Pretoria. We've got a new team and a new challenge, you can't have your head down. You've got to pick yourself up, move forward and be ready to play the next week."

The Brumbies will have to adjust to playing at altitude in Johannesburg and Pretoria, but the Lions will be travel weary after spending the last month on a tour of Australia and New Zealand.