ACT Brumbies rookie Mack Hansen believes Australia can "win it all" at the World Cup in France next month as he mounts a redemption mission after missing out last year.

Hansen was ruled out of the 2017 tournament after doing a "pretty good number" on his ankle and is determined to leave his mark on this campaign. 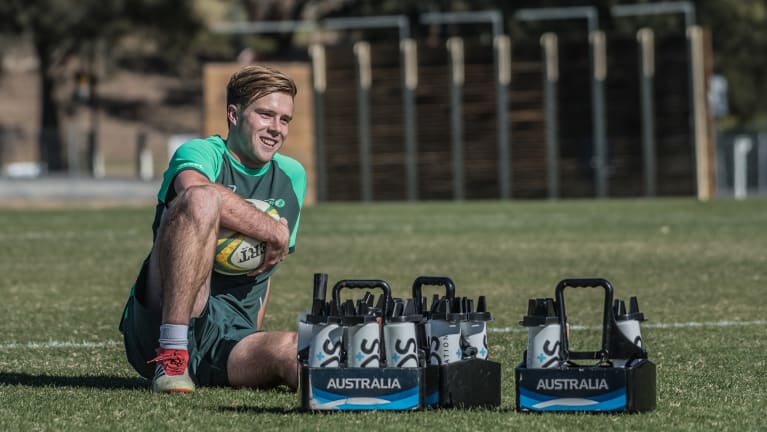 Brumbies rookie Mack Hansen in camp with the Junior Wallabies on Friday.

The junior Wallabies will play pool games against Wales, Japan and New Zealand in France as they aim to end Australia's struggles at the under-20s tournament.

The team hasn't finished higher than fifth in recent years but Hansen believes that's all about to change and spoke confidently at the team's camp in Canberra on Friday.

"I honestly think we have the squad to do it and if we all put our heads down I genuinely reckon we can take it out.

"We have a chance to be really dangerous over there and surprise teams a lot."

Brumbies back-rower Rob Valetini was also been picked in the junior Wallabies squad, but joined his Super Rugby side on their tour of South Africa given their injury woes.

Hansen said Valetini was a huge loss for their campaign and but emphasised he was still looking forward to the "once in a lifetime" trip.

"Rob has been killing it for the Brums so we’re spewing, he’s a big lad who runs hard and tackles hard and he should be aiming for top squad [Wallabies] at the end of this year," Hansen said.

"It sucks he’s not here but I’m glad he’s doing well. It's been unreal being in the squad myself, I did a pretty good number on my ankle last year and missed out.

"This is my last year I’m eligible so I’m just trying to relish the opportunity because this will be a once in a lifetime trip.

"A free trip to France to play the sport you love, you can’t really complain with that, I’m stoked."

Hansen is yet to make his Super Rugby debut and is being groomed as a five-eighth at the Brumbies, but will play fullback for the Junior Wallabies.

The young playmaker has set his sights on a Brumbies debut next season but in the meantime his focus is in the weights room.

"I need to develop physically a little bit more and get a little bit bigger, but I feel like my skills have come a long way this year," Hansen said.

"Next year I’m hoping to be pushing into that 23 but this year I’m just happy to learn and try to get a bit stronger and bigger.

"Hopefully I might get a game or two next year but if it takes another year after that I’ll just put my head down and keep working until I get my chance."