An 80th minute penalty goal in New Zealand has ended the ACT Brumbies' faint finals hopes before they even got a chance to touch the ball in Sydney on Saturday.

The Melbourne Rebels kicked a penalty goal with less than 60 seconds left in the game against the Otago Highlanders, getting them within six points in a 43-37 loss in Dunedin. 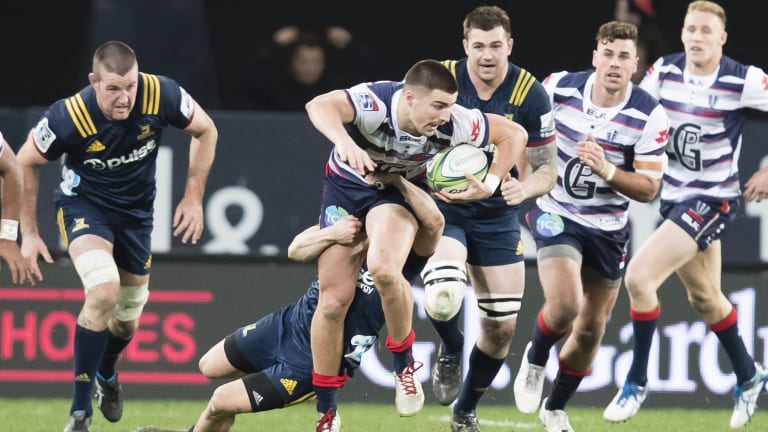 Jack Maddocks started at fullback for the Rebels.

The kick crushed the Brumbies' chances of making a last-ditch charge to the play-offs, with the Rebels securing a crucial bonus point for losing by less than seven points.

It puts them six points ahead of the Brumbies. The ACT side can only score a maximum of five points if they get a bonus-point win against the NSW Waratahs on Saturday night.

So before the Brumbies even packed their bags to go to Allianz Stadium, they were left shattered in their team hotel in Coogee after the Rebels' last-gasp shot at goal.

The Rebels now need to the Argentina Jaguares to beat the Durban Sharks on Sunday morning to clinch a finals spot for the first time in the club's history.

But the Brumbies looked like they were still alive in the closing stages of the match when the Highlanders scored a try with three minutes left to extend their lead to nine points.

It would have been enough to keep the Brumbies in contention for at least a few more hours, but the Rebels got within kicking range and were awarded a penalty.

Confusion reigned and the Rebels considered packing a scrum to go for a last-minute try, but Jack Debreczeni eventually slotted a goal to break Brumbies hearts.

The Brumbies only have themselves to blame for missing the finals for the first time since 2012. They let too many opportunities slip early in the season and rallied too late to book a play-off ticket.

They were relying on a last-round miracle just to sneak into the top eight. They needed the Rebels to lose by eight or more, to beat the Waratahs by three tries or more and then watch the Jaguares beat the Sharks in South Africa.

In the end it all came crumbling down at the first hurdle, leaving the team to play for pride against their biggest rival in the last game of the regular season.