Asked about his childhood as he stood on the practice range at a golf tournament in Connecticut this summer, Bryson DeChambeau said his overriding memory was a conviction that a nonconformist would eventually get more done.

“Even as a little boy, I always questioned everything,” said a smiling DeChambeau, whose eccentric, hard-swinging tactics and overpowering performances have roiled the golf world this year. “It’s how new things happen.”

With the pandemic-delayed Masters Tournament set to begin on Thursday, the bulked-up DeChambeau, who bludgeoned the United States Open field and an esteemed golf course on his way to victory two months ago, plans to unleash his most outrageous assault on golf’s traditions yet. If successful at the revered Masters, which draws voluminous worldwide television ratings, DeChambeau’s gargantuan drives and muscular wedge shots could change the paradigm of how the game is played for the next decade, or more.

At least that will be DeChambeau’s ambition when he sets foot on the first tee Thursday as the unquestioned tournament favorite at the venerable Augusta National Golf Club, site of the Masters since 1934.

“My goal is to inspire a new generation of golfers to think differently and just go out there and bomb it,” DeChambeau, who believes 400-yard drives will become the norm during his career, said in a recent interview. “Augusta would be the right stage for that.”

DeChambeau’s plan is to reinvent golf in much the same way that a 21-year-old Tiger Woods did during his seminal victory at the 1997 Masters, with booming drives that led to a tournament record for the lowest four-round score — and 26 other tournament records tied or broken.

DeChambeau, 27, has gained more than 40 pounds in the past year and as much as 30 yards on his tee shots, he says, because of an innovative, borderline maniacal workout and nutritional regimen. He swings with a ferocity — and velocity — heretofore unseen on the PGA Tour, where players for decades have been schooled to temper their all-out swings in order to enhance assets like tempo and rhythm.

Not DeChambeau, who swings as hard as he can just about every time, especially off the tee. He repeatedly talks about reshaping golf ideology and smashing drives “as far as I possibly can.”

It is a quest that consumes him even as he should be basking in his greatest accomplishments. For example, DeChambeau, who rarely drinks alcohol, stayed up fairly late after his Open victory at the Winged Foot Golf Club outside New York City in September. Early the next morning, however, he was on a jet to Denver, where that afternoon he went through an intensive two-hour workout with Greg Roskopf, whom DeChambeau calls his “muscle specialist.”

“He brought his trophy, which was fun, but we also had another two-hour session the next day,” Roskopf said in a telephone interview late last month. “Bryson was already saying, ‘I want to get everything I can out of my body for the Masters.’”

Roskopf, a 57-year-old former strength and conditioning coach at Fresno State, near where DeChambeau was raised, worked for many years as a performance and injury-prevention expert on the staffs of the N.F.L.’s Denver Broncos and the N.B.A.’s Utah Jazz. About seven years ago, Mike Schy, who coached the teenage DeChambeau and played at Fresno State, sent DeChambeau to Roskopf because DeChambeau was experiencing some lower back pain.

It was in Roskopf’s gym-like laboratory in Englewood, Colo., that DeChambeau — who majored in physics at Southern Methodist University and whose nickname among his peers is “the mad scientist” — began to transform himself last year into the longest, and most effective, driver of the ball on the PGA Tour.

Roskopf put DeChambeau through what he calls a neuromuscular overhaul, a program he describes as muscle activation techniques intended to correct body imbalances that inhibit, among other things, range of motion. The system is also meant to build higher tolerance levels for exercises that can increase strength.

When not visiting Roskopf every three weeks, DeChambeau works out daily at his home in Dallas, where he has installed each piece of Roskopf’s specialized equipment in his garage. DeChambeau eschews many traditional weight lifting exercises like squats or dead lifts to focus instead on isolated muscle groups that govern side bend, back extension and trunk and leg flex.

He also started consuming 5,000 to 6,000 calories a day, aided by drinking seven protein shakes made by Orgain, one of his many sponsors.

How much strength has DeChambeau gained?

On some exercises, Roskopf said, his pupil more than doubled his weight load. 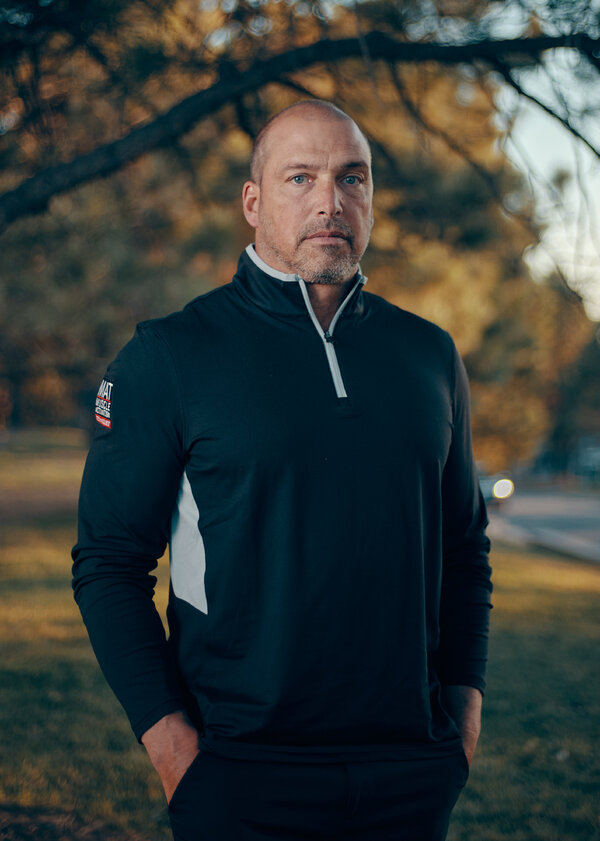 “I’ve been in pro sports for 30 years, and some of his gains are kind of astounding, just dramatic,” Roskopf said. “With some of these movements, we’ve run out of more weights to add.”

Talk like that will naturally lead to suspicion of steroid use, and earlier this year a small number of DeChambeau’s colleagues were privately leery of his prodigious weight gain. The doubts require some context, though, because many of the PGA Tour’s top players are smallish. Rory McIlroy weighs 160 pounds and Justin Thomas 145, so DeChambeau’s 6-foot-1, 240-pound linebacker-like physique stood out more than it might in the overall cohort of professional athletes.

Roskopf conceded that whispers about performance-enhancing drugs were expected.

“When you see changes like that, you think somebody’s taking steroids,” he said. “But I can guarantee you he’s not taking steroids. I know it raises eyebrows, but we actually take it as a compliment, because it’s proof that the process works. And Bryson is like, ‘They can test me anytime.’”

DeChambeau, like all PGA Tour members, is regularly tested for performance-enhancing drugs.

With few exceptions, his tour contemporaries have been generous in their praise of his accomplishments over the past year, which include two victories and eight other top-10 finishes.

“What Bryson has done is no easy task,” Woods said. “He’s hitting it further; he’s figured it out. But let’s look at the fact that he’s hitting it as straight as he is. That’s the most difficult thing to do.’’

DeChambeau, who has vaulted to sixth place in the world rankings, is something of a loner on the tour, and his methods have periodically prompted his fellow pros to roll their eyes. (In July, he wanted to be able to move his golf ball because of nearby fire ants no one else had observed.) But his competitors also see DeChambeau tirelessly hitting practice shots after a round, until darkness obscures the ball’s path.

At home in Dallas, he might go weeks without playing the game, because he finds casual golf inefficient. Why take 70 random swings over 18 holes with golf partners when the same four hours can be spent pounding 300 balls on a range to get what DeChambeau truly craves: instant technological feedback on a shot’s ball and swing speed, its apex, spin rate, carry and distance?

“You’ve got to recognize how much he’s elevated the discussion of golf fitness and the science of the game,” Phil Mickelson said. “But he’s been successful in a lot of the other areas you need to win at golf.”

It is the other pivotal golf skills that will be most scrutinized this week at Augusta National, where daunting, undulating greens have historically been the chief challenge. DeChambeau’s best finish at the Masters has been a tie for 21st, and an unreliable putting stroke has largely kept him off the leaderboard in his three appearances.

But this year DeChambeau, who has improved his putting to the point where he ranked 10th last season in strokes gained/putting, intends to overpower the Augusta National layout with 350-yard drives that could put considerably less stress on the rest of his game.

Where other golfers will be hitting 5-irons into greens, DeChambeau expects to be hitting wedges. Can such a power-based onslaught succeed?

“Absolutely, it can work,” the two-time Masters champion Bernhard Langer said. “Bryson will have to hit it reasonably straight, but he could have a tremendous advantage.

“Take the 18th hole: If he can fly it over the bunkers from the tee, then he’s got a huge, 100-yard fairway to land his ball in. Most of the guys will be aiming for the usual landing spot, which is 20 yards wide. If he hits it all the way down the hill on the 11th hole, he’s got pitching wedge to the green, while I’m hitting a two-hybrid. That’s a big difference.”

Past champions who once questioned whether DeChambeau’s strategy would be successful in major championship conditions — like those at Winged Foot in September — have changed their minds.

“I got it wrong back at this year’s U.S. Open,” the three-time Masters winner Nick Faldo said. “We’ve always said you can’t be a long-driving champ or train like one, because you’ve still got to chip and putt. Now with the science, they’ve found a way that you can. So this is amazing.”

Which leads to the question of whether the distance breakthrough spearheaded by DeChambeau, who is just part of a phalanx of long-driving young golfers, is good or bad for golf.

Faldo, who is a CBS golf analyst, wondered how much longer golf courses would need to become to accommodate pro and recreational golfers who learn to hit colossal drives.

“It would cost a fortune to buy that much land and irrigate it, too — that’s impossible,” said Faldo, who speculated that the golf ball might have to be restricted or softened to limit how it will fly.

“Maybe the new golf ball will be a marshmallow,” he said, laughing.

But others see DeChambeau as a godsend to the game, especially at a time when it needs an infusion of youth. Andy North, a two-time U.S. Open champion who is 70 years old, called DeChambeau “cool.”

“He’s proven there’s yet another way to play golf,” said North, now an ESPN golf commentator. “There’s a million ways to play this game and there’s no one perfect way to do it. And I think that’s really refreshing.”

DeChambeau knows exactly where he stands on the issue. He draws the greatest satisfaction not from his achievements on the golf course, but in the aftermath of them, when young golfers approach him and say they want to swing as hard as he does.

“That really makes my day,” he said. “That why I’m not going to stop. I’m going to keep pushing the boundaries, keep questioning the limits.”