Canterbury have issued a hands-off warning to rival clubs concerning David Klemmer, declaring the international prop will remain at the Bulldogs until at least the end of 2020.

There is so much uncertainty surrounding the Bulldogs salary cap and future playing roster but Canterbury chief Andrew Hill on Tuesday stressed that Klemmer was one player who would not be going anywhere. 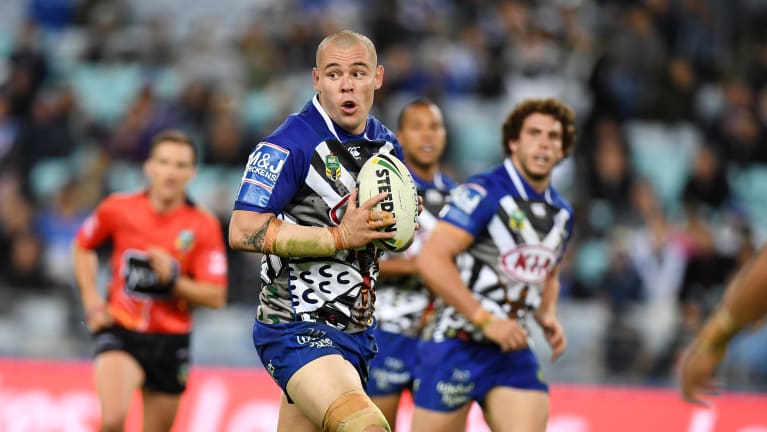 As revealed in the Sun Herald Parramatta had made some discreet inquiries about Klemmer in a bid to bolster their forward pack.

One of the rare players who handles his own negotiations Klemmer is signed until the end of 2020. While he loves the club he said on Tuesday ''it would be hard to leave but I need to look after my family and kids as well''.

Hill, however, said Klemmer had nothing to fear, and the blue and gold faithful were not about to welcome home one of their juniors.

"We've had no discussions with Parramatta and should they or any other club inquire about Dave's future, it's very much here at Canterbury,'' Hill told Fairfax Media.

"We're not interested in talking to anyone about David.''

Canterbury will address concerned members on Thursday about the embarrassing cap situation that has left them with around $800,000 to splurge on a dozen players for 2019.

The playing group will also be addressed for the first time on Thursday about just how bleak the future is.

Hill, coach Dean Pay and the new board have needed time to comprehend the awful mess they inherited.

Despite the number of back-ended deals that have put pressure on the cap moving forward, no Canterbury player will need to be squeezed out before June 30, with the club already compliant for this season.

Klemmer said of his own situation: "It's frustrating hearing it but I'm contracted here at the club, I've been a big supporter of club since I was a kid and it's a dream to come here every day and play for the club.

"I know it's a business, you have to look after your family but it would be hard to leave.

"Nobody has contacted me. I don't have a manager. Nobody has pulled me aside.

"I don't know what the salary cap is. I know there's been talk it's tough at the moment but you rather honesty and if there is, you don't want to hear it through media sources.

Canterbury posted only their third win of the season against the struggling Eels last Friday but now face a tough trip to the Sutherland Shire to face an Andrew Fifita-inspired Cronulla. The Sharks are chasing their fifth straight win and are expected be boosted by the return of Paul Gallen.

For Klemmer and Aaron Woods it will be a good personal battle with former NSW teammate Fifita, who opted to stick with Tonga ahead of his state this year.

"I've watched him the last couple of weeks and on Sunday I thought he was outstanding as a captain and really stood up, especially with 'Gal' and 'Waydo' [Wade Graham] all out,'' Klemmer said.

"He's always a hard man to take down, he has great footwork, and he runs like a back.

"He gets the ball rolling for them, he gets his body between people and he's a big boy to take down at 120-plus kilos.''

Klemmer has come off the bench the past couple of weeks after coach Dean Pay approached him and Aaron Woods about one of them no longer starting.

The decision was not based on form but designed to ensure at least one of the NSW and Kangaroos props was on the park at all times.