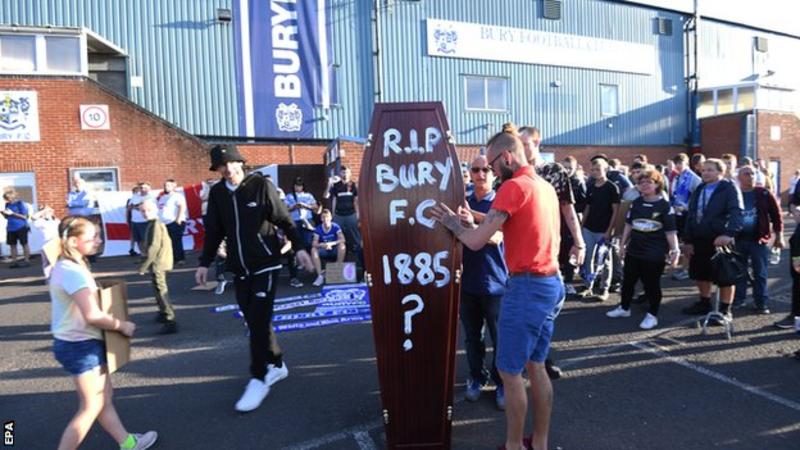 Members of the club’s executive met on Friday to discuss their options, having earlier sent the EFL a letter questioning its handling of the affair.

The Shakers were expelled after C&N Sporting Risk pulled out of a takeover.

“All options are on the table. One that has to be considered is legal action,” said the club’s lawyer Chris Farnell.

“At least three bids went in on Friday before the deadline. The EFL allowed an extension for one bid – from C&N – but other bids were attracted and submitted to the EFL and it would appear they weren’t considered.

“There’s been no explanation.”

In a club statement issued on Thursday, Bury confirmed the EFL would not be rescinding its decision to expel the club – despite the Shakers saying a £7m takeover bid had been submitted prior to Tuesday’s second deadline.

The club have since sent a letter to the EFL setting out a list of questions – seen by BBC Sport – including:

Bury, who had been in the EFL for 125 years and have twice won the FA Cup, have given the league until 16:00 BST to respond to their letter.

“It seems to be very unfair on Bury because of an artificial timeline,” Farnell told BBC Sport.

“The decision to, in effect, kill a club has been made without any explanation as to why a very genuine bid from a very high-net worth individual would not be considered.”

General manager Scott Johnson said there is “a lot of people wanting answers over their future”.

“I was giving them solutions and all we needed them to do was be brave,” he added.

Shakers supporters group Forever Bury have also written to the EFL’s executive chair Debbie Jevans asking for the club to be reinstated.

“The EFL’s misguided handling of this matter has directly prejudiced the interests all Bury FC stakeholders including its creditors, shareholders, players and employees and we reserve all our rights to hold the EFL accountable in this respect,” said the letter.

The EFL said it had received the correspondence from Forever Bury and would “respond appropriately” after “considering its contents”.