"The window allocated in the ICC FTP for Bangladesh to tour Australia in August has been postponed, by mutual agreement by both Cricket Australia and the Bangladesh Cricket Board," a CA spokesman said. "Both countries agreed to postponing that tour to be better aligned ahead of the ICC World T20 in 2020 in Australia." 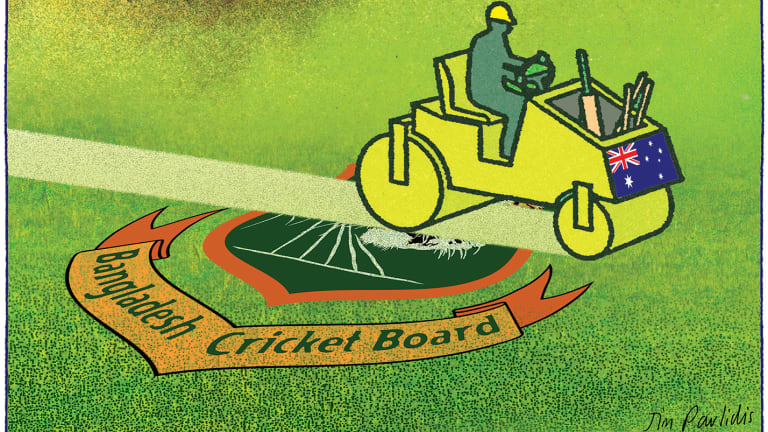 Let's borrow Darren Lehmann's laptop, since he doesn't need it any more, and run that through a bit of analysis.

English language? One of the three most obtuse missives that passed across this desk this week, which is saying something. Fail.

Veracity? Well, the chief executive of the BCB says the cancellation is "disappointing", which excludes one of the two countries who have both mutually agreed to this joint cancellation, which somewhat discredits the mutuality, also the agreement. Conclusion: this is a unilateral mutual agreement. Fail.

Clarity? "To be better aligned"? What even is that? Fail.

Last century, when contemplating Zimbabwe's application for Test status, former Australian board chairman Colin Egar said: "We support them – in a non-playing sense." The only difference between that statement and this is 20th-century spin-doctoring.

Concerning Zimbabwe, Australia has been true to Egar's word; they have met only three times in Tests. Australia have played Bangladesh six times, and there won't be a seventh any time soon. Instead, at an unspecified time, there will be some fully aligned, finely spun, farcically irrelevant T20s.

There are 99.94 reasons for Australia to have played Bangladesh this winter. There's the betterment of the game. The Banglas struggled for a long time in Test cricket, and to this day have won only 10 matches. But the last two were against England and, ahem, Australia. They're coming, except now they're not coming here.

In Australia, the contest may have proved to be one-sided, but one-sided is better than none-sided, if the game is to survive, let alone grow. Zimbabwe's history shows this. This weekend, Ireland is playing its inaugural Test match, against Pakistan. Next month, Afghanistan will, in India. Most people think these matches are good ideas, even if they do turn out to be a little on the one-sided side.

But for Bangladesh, in Australia, no Tests, nor even the three one-dayers originally slotted, just a handful of T20s, sometime or other, some place or other, but so perfectly aligned that they will make you cry.

The Future Tours Program (that's FTP in the BS above, BTW) was always a document honoured more in the breach than the observance, and is soon to be redundant anyway, so that Australia, England India can get on with playing one another a lot, and no one else at all. It's the alignment, you see.

There's redemption. With its tin ear, and that blindfold, and that peg on its nose, CA appears not to have noticed that they are a little on the pongy side right now. A couple of matches against Bangladesh, played for their own sake, might have demonstrated fellowship and common cause. If they were a little out of sight and mind, no harm would have been done, but some good would have been served. On that, we each can all agree, mutually, surely?

Of course, the real reason the series has been scrapped, as widely reported, is that the August timeslot doesn't suit the broadcaster or the bankers. Tim Worner promised cricket "the Seven treatment", and here it is. Seven has outlets. You hear it all summer, "the channels of Seven". But not one can be spared for shoulder season cricket.

As for that $1.2billion CA were rolling in last month, suddenly it can't afford the spare change needed to host Bangladesh. Evidently, there has been a realignment.

The BCB is wise to this. "They looked at how financially viable the series will be for them, which is disappointing," said chief executive Nizamuddin Chowdhury. If Bangladesh could play unprofitable series for the good of the game, why could not Australia, he asked. Doubtlessly, the answer was alignment, or something on those lines.

Perhaps there was a sound reason to shelve the Bangladesh series. But as usual, fans were fed bureaucratese, acronyms and misalignments. Last month, quantifying cricket on TV henceforth, CA made less than all sound like more than ever. Now, it trying to make none appear better than some.