Calvin Kattar is working behind-the-scenes to get the fight which would lead him to the UFC title, and is targeting Max Holloway 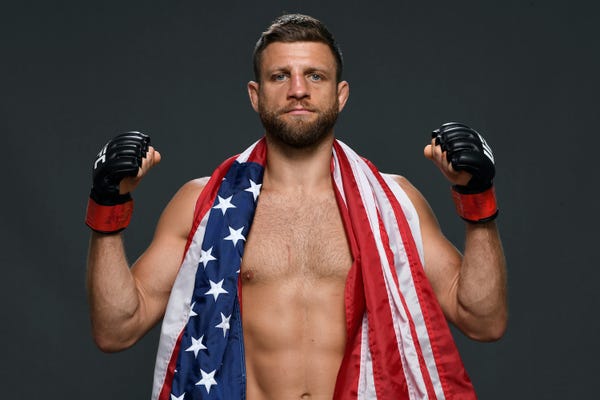 Calvin Kattar is a reflection of his nickname "The Boston Finisher" in more ways than one.

Boston, Massachusetts is a blue-collar city renowned for producing a hard-working, teak-tough, and scrappy population.

Few typify that as much as Kattar, an expert striker in the UFC who juggles fighting full-time with a combat sports promotion he used to fight in and now owns — the New Hampshire-based Combat Zone.

While the big firms like the UFC appear to thrive in the pandemic era, the smaller, regional companies are hit hard as they rely on ticket sales and lack the benefit of having big broadcast partners like ESPN.

Organizations like Kattar's are yet to restart operations as they wait until mass gatherings are permitted again, to ensure they do not make losses on events.

Regardless, Kattar continues to work behind-the-scenes not only on his Combat Zone company, but his mentoring of the athletes who fight under his banner.

When he spoke to Insider in September, he sat down inside UFC's training center in Las Vegas, propped his camera-phone on the bench, and wrapped his hands as he told us the importance of continually-sharpening one's skillset and always staying ready in the current climate.

Fresh from a Fight Island win, Kattar targets his next opponent

In his most recent bout at Fight Island on July 15, Kattar landed 70 strikes on Dan Ige's face and left his opponent with a swollen eye, countless cuts, and many bruises.

It was a big performance from a man steadily-climbing the UFC's featherweight rankings. He is the division's No.6 fighter and is targeting a bout against the No.1 contender Max Holloway.

But though he beat up Ige, the nature of his fan-friendly, battle-fantastic mentality means he did not leave the Flash Forum in Abu Dhabi unscathed. His nose was a bloody mess. So too were his fists.

"Oh yeah, he opened up my nose," Kattar told Insider before shrugging off more injuries like they're nothing. He's used to broken bones.

"There was a little bit [of damage] on my hands. Knicks and knacks. Nothing too crazy."

Kattar enjoyed the war with Ige. He lives for the moments he can show off his crisp Muay Thai.

"Ige's a tough kid, I take nothing from him. He was on a six-fight win streak. A tough man. But I got the win, I'm glad, and we move on to the next. I felt good overall. I'd rather be a little bit sore off a win than healthy off a loss. So these were good problems to have.

"Then I was rehabbing, making sure my body is nice and strong, hopefully before another strong camp and a quality opponent before the year's end."

Before Kattar spoke to Insider he had been on vacation, taking time-out after a tough camp and his Fight Island assignment.

It was his second bout in the pandemic. Earlier in the coronavirus-era of fighting, he mercilessly battered Jeremy Stephens with the tip of his elbow.

Kattar's on a roll this year, and even though he went with his buddy to a beach house in Massachusetts and ate pizza under the sun to relax, he still got light recovery work-outs done, went running, and did bike work.

These days he's training like he's got a fight, even though one's not yet booked. It's a lesson he wants to instill in his local Combat Zone athletes in New Hampshire.

'Chaos is what us fighters are used to'

Kattar said a pandemic lifestyle hardly affects fighters as it can often be a lonely lifestyle of 4 a.m. starts, getting out in the dark of the night and running on an empty road with nothing but your thoughts.

"It's just normal, man," he said. "Chaos is what us fighters are used to on a daily basis. Social-distancing and self-isolation … that's the fighter's lifestyle.

"So really, if anything, this afforded the guys who are serious about the game to focus and really dial in on what they're doing.

"For everybody else, it gave them an excuse to not put in the work and sit on the sidelines.

"I'm busy, controlling the things I can control, putting in the work, and just taking every opportunity put in front of me because they don't always come around and when they do, you've got to grab them.

"I tell these guys to stay ready. You see me … we're staying ready over here. Trying to be ready for any opportunity. That's what you do as an athlete. Be ready for any moment which comes."

Combat Zone has held two events so far this year, having held four last year. It remains unclear when Kattar will be able to hold events again, even though he's been speaking to the government about partial fan allowances at the gate.

"We're really trying to get creative with how we can get things up and running," he said. "But you can only do so much as the State requires and allows. We're really at their mercy, but we're doing all we can.

"I just want to do what [the UFC President] Dana White's done which is keep the guys busy and my goal is to afford them the opportunities that I got, which is to create a platform so they can compete and then hopefully come out here and experience the UFC Performance Institute and all it has to offer."

Kattar wants to build Combat Zone into a feeder league for the company he fights for. He wants local talent from where he's from to get matches on Dana White's Contender Series, or to even get a call-up to the UFC itself.

"I'm trying to bridge the gap from Combat Zone to the UFC. It's not for everyone. Not everyone's going to make it but we've got to help the ones who want to work and point them in the right direction."

Kattar said they've been speaking to local authorities about bringing fans into small arenas. "We're in talks about that now. We're eyeing a hopeful date by the end of the year."

One of the problems is that they'll get meetings booked, the preparatory work done, but any rise in coronavirus infection rates could shut things down at the last minute.

Kattar said he'll do the work that is necessary even if it gets canceled by things he cannot control. He just wants to give back to the organization which shaped him as an athlete.

"Combat Zone changed my life in so many ways and I just want to provide these guys with the same opportunity. It really gives me that second wind and I see myself in a lot of these guys come showtime when I host these events."

Kattar described the promoting business as "a whole other beast" but said there were similarities with fighting as both require you to surround yourself with a great team that you can trust.

"I'm excited to go back to promoting shows and providing normalcy to people who just want to go out and see sporting events, for athletes to compete again, and hearing a crowd when you get a big win — that's special. I hope we can get back to that.

"But in the mean time, just got to focus on what you control."

What Kattar can control right now is his training, staying ready for when he gets an opportunity — one which might even come at short notice.

He told Insider he wanted to compete in a rematch against Zabit Magomedsharipov during the ongoing Fight Island festival, but said he did not think the other team wanted it.

Now he's just targeting anybody in the top-5 — particularly Max Holloway, who is ranked No.1.

He wants that one fight, and win, which forces a title shot against whoever the champion happens to be. It is currently Alexander Volkanovski.

"That's the goal — who's the guy who gets me to him. It could be Max Holloway. Some people think he's still the champ after the last fight, and anybody who goes in there against Max, and wins, deserves the next title shot.

"If everyone else is busy, who knows, maybe the stars align there. I think it pays being busy."

Kattar has two big wins over Stephens and Ige since dropping a decision to Magomedsharipov.

"Since Zabit and me fought I got two wins and a win over Max leapfrogs me ahead of Zabit to fight the champ.

"But we know how that s— goes. It's hard to get lost in all that, so it's best to stay busy in the gym, doing sessions, and not think about the fights that will get picked or not.

"We'll hope for the highest-ranked guy for the most amount of money — just keep it simple, man. I try to give the fans the things that we see.

"Everyone loves a good knockout and that's what I give. I fight guys like they owe me money.

"We're working twice as hard, fighting the best guys in the world, and I couldn't be happier."