Small forwards Willie Rioli and Liam Ryan could hold the key to unlocking the Magpies' defence in Saturday's grand final, according to Eagles' teammate Jamie Cripps.

The pair have been a dynamic addition to the Eagles' forward line this season, kicking 47 goals between them, proving to be both a handful for opponents and an inspiration for teammates. 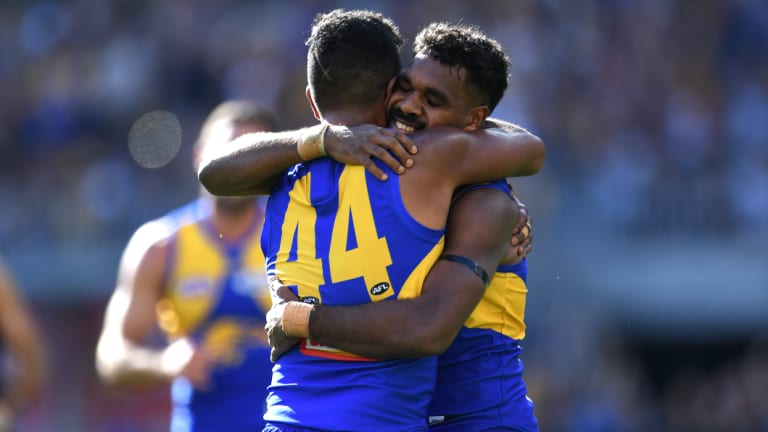 "It's exciting to have them in the team and I think it has helped my footy and most of the guys in the forward line's footy," Cripps said.

"The speed and skill they have got makes them awesome to watch. Most of the time you don't know what they are going to do."

Although most of the attention has turned to the Eagles' twin talls, Josh Kennedy and Jack Darling, the Magpies don't have natural match-ups for the Eagles' small forwards with Brayden Maynard, James Aish and Tom Langdon forced to take the job in the past month.

The Eagles also have Cripps and Mark LeCras capable of kicking goals, with all six players having kicked at least 20 this season (Collingwood have six players with more than 20 goals to their names this season too) and the super six kicking 23 of the Eagles' 30 goals this finals series.

Ryan kicked two goals in the opening quarter against the Magpies in the qualifying final while Rioli kicked three against Collingwood at the MCG in round 17.

"Being role players and playing for the team is what we want and that is what they do."

Cripps grew up a couple of years behind Kennedy in Northampton and shared the last grand final experience with LeCras and Darling also.

That quartet wants Rioli and Ryan to take the game on and play on instinct as long as they set up in the right manner.

Darling told Fairfax Media that the group enjoyed each other's company so much that doing the work required to get the team functioning as a unit was easy.

He said the finals hype had not really entered the forward line's thinking.

"It's been pretty calm and process-driven," Darling said.

Darling had a disappointing grand final last time out, but said he moved on the from the game as soon as he watched a replay just a few months after the match, when he found himself at a loose end at home.

"I watched the game again just before pre-season started and got over it then … I haven't really thought about it since," Darling said.