Shea Weber, in his second game back from a knee injury, scored twice on Saturday night to help the host Montreal Canadiens defeat the Rangers, 5-2.

Artturi Lehkonen also had two goals, and Carey Price stopped 20 shots as the Canadiens ended a five-game skid while giving the Rangers their fourth loss in five games.

Weber, who missed the first 24 game with the injury, which cost him nearly a calendar year, opened the scoring 3 minutes 53 seconds into the game. He unloaded a one-timer from the point for his first goal of the season and first over all since Dec. 5, 2017.

Weber doubled the lead with 7.2 seconds left in the period. He created a turnover in his own zone, raced up ice to join the rush, took a feed from Tomas Tatar — who was prone on the ice while he made a cross-ice pass — and snapped a top-shelf goal.

Lehkonen made it 3-0 at 2:04 of the second period when he elected to shoot on a three-on-one rush, and then added another at 5:29 by intercepting an ill-advised clearing attempt and ripping it home.

Jimmy Vesey scored for the Rangers at 8:10 of the middle period when he took a feed in the high slot and fired a glove-side puck past Price. Vesey then set up Ryan Strome’s tap-in power-play goal at 14:11 of the period.

But the Rangers’ comeback hopes were dashed when Tatar scored on a power play just past the midway point of the third period.

Alexandar Georgiev made 36 saves for the Rangers, and Mika Zibanejad had two assists. 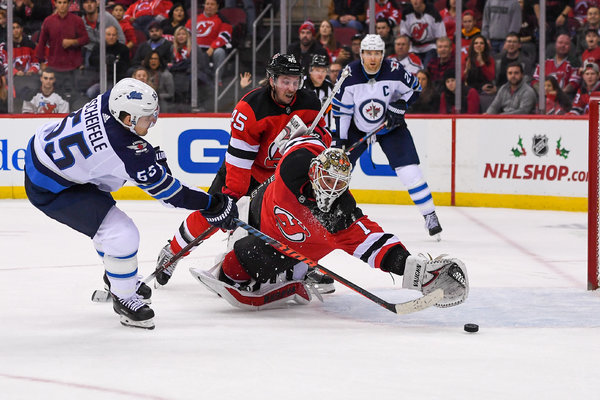 JETS 4, DEVILS 3 Mark Scheifele scored with 17 seconds left in overtime, giving Winnipeg the victory and dealing the host Devils their fifth loss in a row.

Scheifele stole the puck from Nico Hischier, pivoted and fired a shot on Devils goalie Keith Kinkaid after a few strides. Kinkaid made the save, but Scheifele put in his rebound for his second goal of the game. Taylor Hall failed to convert on a two-man breakaway with Hischier in the first minute of overtime.

The Devils, trailing by 3-1 after Josh Morrissey and Andrew Copp scored third-period goals for the Jets, tied it on scores by Jesper Bratt on a power play at 15:41 and by Hall at 18:04, with Kinkaid off in favor of a sixth attacker.

Winnipeg’s Laurent Brossoit made 36 saves and Kinkaid had 34 for the Devils, who fell to 0-5 in overtime.

NYLANDER AND LEAFS REACH AGREEMENT Forward William Nylander and the Toronto Maple Leafs agreed to a six-year contract extension, just before the N.H.L. deadline to sign players and have them be eligible for the season.

The contract extension will pay him $10.2 million this season and an average of $6.9 million the next five years. It ended a standoff between the 22-year-old Nylander, a restricted free agent, and the team. He had been working out in Europe during the holdout.