They started as a group of mates playing basketball for "a bit of fun" but now they want to take on the world's best and shoot their way to a $26,000 pay day.

Canberra's three-on-three men's team have advanced to the Pro Hustle quarter finals and will face some of the world's top-ranked teams in Sydney on Friday. 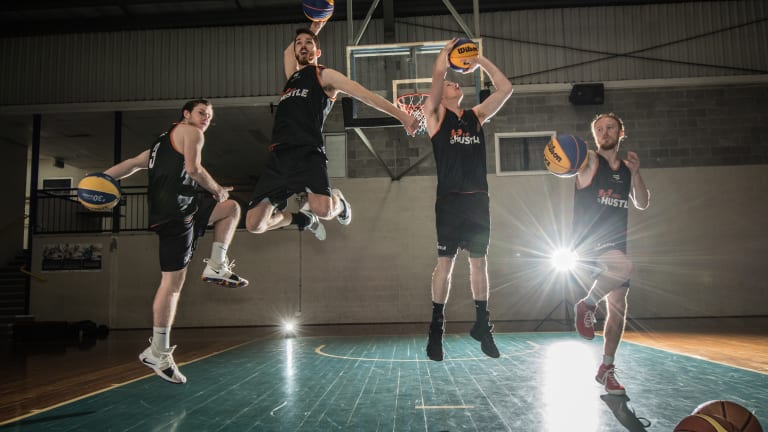 Lachlan Ross, Tim Hewitt, Dylan Simpson and Reece Kaye will be playing for a $US20,0000 prize and a ticket to the FIBA World Master's Tour.

Ross admits they only entered the competition for fun, but now believes they can knock off international heavyweights Serbia and France en route to the title.

"We are just a couple of lads from Canberra but to think we could take on some of the world's best is really exciting" Ross said.

"Early on in the competition we played as the underdogs but I think we have shown everybody that we are no easybeats.

"We gained a lot of respect from the other teams and there's a lot of excitement amongst ourselves."

Dubbed a "high octane" version of traditional basketball, the condensed three-on-three version has halved the shot clock to 12 seconds and introduced a new scoring system.

Three-on-three has been added the Olympic Games program for Tokyo in 2020 and Ross says the fast-paced version of basketball lends itself to the Australian style.

Canberra has been leading the way in the development of the sport, building a new $1 million facility at Belconnen for the first two specialised three-on-three courts in Australia.

Canberra junior Carlie Smith is considered one of Australia's leading female three-on-three players and is in contention to secure an Olympic berth in two years.

But for the men's Canberra team say their only focus is trading small crowds at Belconnen for the chance of a lifetime in Sydney.

"We are not as tall compared to the other teams going into the competition, so we have to the move the ball much quicker which helps a lot in this game," Ross said.

"Canberra led the way in-terms of providing a platform to showcase young talent for competitions like this."